The All-Star Game is behind us, Bradley Beal has proved he can lead any team in scoring (which is good for him, but also the guy deserves a break for once!), and now it’s time to look ahead to the second half of the NBA season. Or, in the Wizards case, slightly more than the second half - due to their extended stretch in January with no games due to COVID, the Wizards have to play 43 games over the next two months. That’s not great! The road ahead looks like it may only be getting tougher for the Wizards, and we may know well before the end of the season whether this will be a playoff squad. But this is an established streaky team, and if the first half of the season is any indication, there may be some big ups and downs before we have any firm conclusions. So today, I wanted to look at some of the upcoming stretches of games and figure out when Wizards fans can look for some exciting wins on the way to the playoffs - or, at the very least, when to push the panic button.

There are going to be tough games ahead. Forty three games is a lot of games to play in just over two months, and, just by sheer numbers, means that there will be a ton of back-to-backs ahead. There are some general patterns to look for across those games - will Russ play more back-to-backs? Will the Wizards be able to keep their legs playing so often? Will Scott Brooks be able to keep a rotation varied enough to avoid exhaustion and injuries? - but let’s look at some specific stretches that could really prove the Wizards’ mettle.

First off, the Wizards will come off of the All Star Break with an away game against the Grizzlies. This is only one game, obviously, but it could be huge for the DC boys. Just one week ago, the Wizards lost to Memphis at home 111-125, in a game that wasn’t close. Turning the tables and beating the Grizzlies in Memphis would be a nice statement win to kick off the second half of the season. Additionally, beating the Grizzlies would provide some evidence that the Wizards have what it takes to win grind-it-out matchups. Memphis ranks second in the league in deflections, per NBA.com, and tied for seventh in defensive rating, per ESPN’s Hollinger’s Team Statistics. The Grizzlies are young, energetic, and over the place, and beating them requires a full game’s worth of effort - something the Wizards simply did not have the last time these two teams met.

After that, there are a few hard stretches against some of the West’s toughest squads, including the league-leading Utah Jazz, LA Lakers, and Phoenix Suns. Most immediately, however, the Wizards will have to face some elite Eastern teams in a back-to-back at home against the first place Sixers and third place Bucks this Friday and Saturday, respectively. Conversely, if Washington can win even one of two here, they prove they’re a playoff-caliber squad that can beat the top teams in the league. In addition to being home, some other factors may play into Washington’s favor: Ben Simmons and Joel Embiid are both currently in COVID protocols after contact with a positive-testing barber over the weekend, so their eligibility against the Wizards could be in question. Additionally, the Bucks proved their vulnerability during a five-game losing streak in February. Milwaukee has since regained some momentum, and Giannis will likely be feeling strong after an All-Star Game MVP Award, but Washington needs to at least keep things competitive against them Saturday night.

Although the Wizards have some hard games ahead, they also have quite a few games they should expect to win. According to FiveThirtyEight’s Elo Ratings (which I won’t make you read about here, but you can get an explanation here, I guess, if you’re into that sort of thing, nerd), the Wizards actually have a favorable second half schedule: 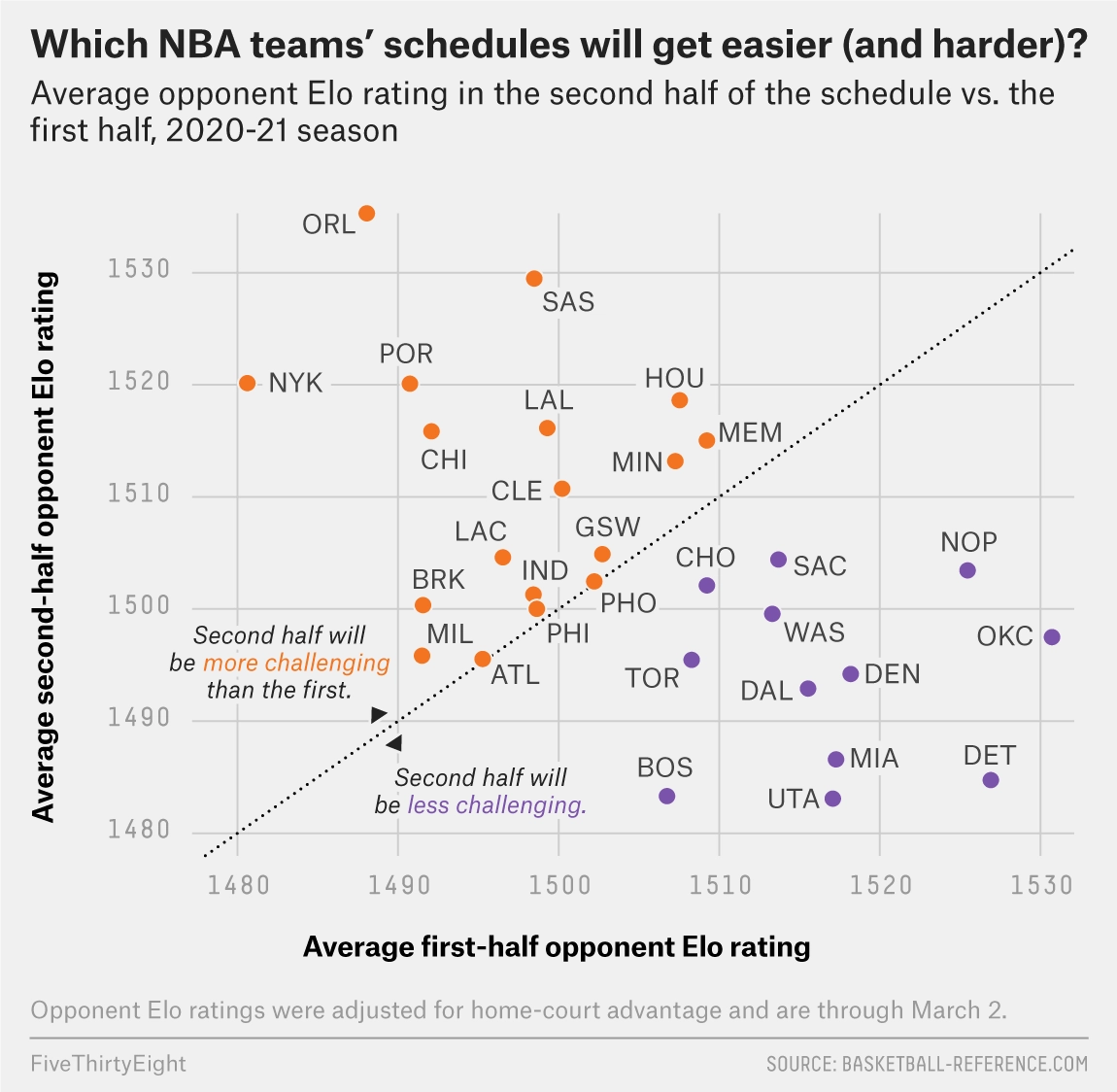 As the graph explains, teams higher and farther to the left will have a more challenging second half than first, while teams lower and farther to the right will have an easier second half. The drawback of this lens is that it assumes an equal schedule in terms of total games and back-to-backs played (and Washington has more than the average of both), but the brightside is that the Wizards should generally be playing against less tough teams. Specifically, this is likely a result of two stretches against some lower ranking Eastern Conference foes - so let’s look at those.

First, from March 23rd through April 1st, the Wizards play the following teams: the Knicks (twice in a row, though not back-to-back days), the Pistons (again twice, although not in a row), the Pacers, and the Hornets. The Wizards should (or probably need, to be honest) get wins in both matchups against the last-place Pistons. Every other team in that stretch will also be fighting for the tightly contested Eastern Conference playoff spots. Wins against the Pacers, the Hornets, and the Knicks could essentially count double in end of season rankings (Wizards gain a win, and the other team vying for the same spot loses one). Washington may not need to win all of these games, but almost certainly a majority of them if they want to at least grab a play-in appearance at minimum by season’s end. It should be noted that this stretch will take the Wizards beyond the trade deadline, marking a kind of point of no return, at least in terms of the players they have on the team and the goal they may be setting.

Similarly, the Wizards end their season with another stretch against Eastern Conference foes. With the exception of the Bucks (who I believe should have locked up a spot by then), almost the entirety of games played in May will be against other Eastern Conference teams vying for playoff spots. The Wizards play the following Eastern Conference squads in May: Indiana (twice), Toronto, Atlanta (twice), Cleveland, and Charlotte. Again, every one of these games could have enormous consequences, especially if the East is anywhere as close in May as it is now. Every one of those teams is currently within two games or fewer of the tenth place cutoff for the play-in tournament (Charlotte and Toronto are one game above it, Indiana and Atlanta are tied for it, and Cleveland is tied with us at two games below it). As a result, this stretch could be a playoff-hunting bloodbath. By then the Wizards trajectory for the season should be pretty locked-in, and if they are still on course for a playoff spot, these games will be must wins, and every time they step on the court they’ll be playing for high stakes. There are many Wizards stories remaining to be told - will Beal end the season the league leading scorer? Will he even end the season as a Wizard? Can Russ show leadership and inspire some youngsters into playoff form? - and, although I don’t know how these stories will end, I’m excited for whatever comes next.