I'm always seeing discussions on here about John Wall that, to be frank, annoy me. So, on Wall's birthday, wanted to provide a bit of data showing just how incredible a player Wall is.

You can see all of this on the TL of a delightful new follow I made on Twitter, @Nick_Sciria. He pulled this information using the NBA Stats page and Nylon Calculus 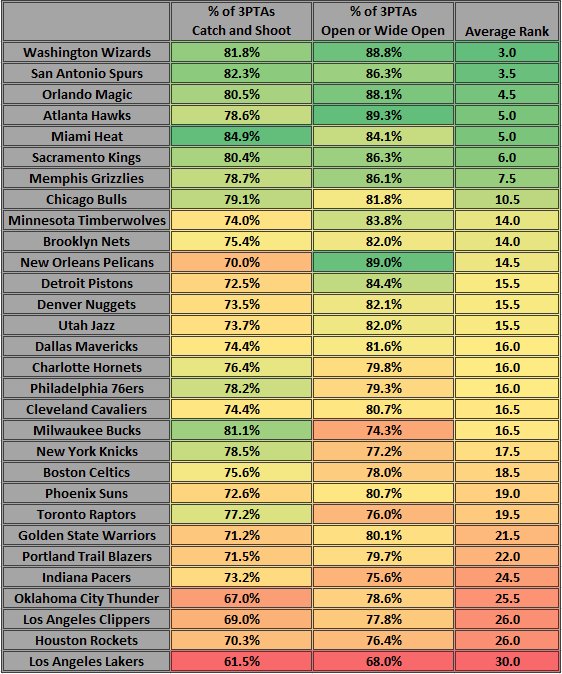 Yup, going by shot type and shot location, we got the best 3pt shots of any team in the league...obviously players like Damian Lillard, Kyle Lowry, and Stephen Curry depress their team's numbers due to the high number of off-the-dribble shots that aren't necessarily open looks. To display why the shots we got are considered better, here are the numbers league-wide. The average 3PT% on catch and shoot Js is 6 percentage points higher than for pull-up Js, and for open/wide open looks is seven percentage points higher than for very tight/tight looks.

Teams like the Wizards, Heat, and Magic would have shot more effectively if they weren't looking to meh shooters to hit a high number of threes.

Wall creates good opportunities from 3 that his teammates actually hit

Number 3 in corner 3 assists, number 1 in above-the-break assists, number 1 in total 3pt assists by a good margin, even though the guy who hit the most of those shots accounted for less than 21% of the total number of assists (as opposed to someone like CP3 or Draymond who got huge chunks of their assists from an exceptional shooter). (Shout out to Ish Smith btw!)

Players logged an eFG% of 61.20% on shots assisted or potentially assisted by John Wall last season per @NylonCalculus.

Like Sciria said above, Wall only trails two players in playmaking USG%. One is Clippers point guard Chris Paul ,who has two highly effective finishers (Blake Griffin and DeAndre Jordan) as well as an excellent (and prolific) shooter (J.J. Redick). The other is Russell Westbrook, who had Kevin Durant as his partner-in-crime until last July, and two great finishing bigs in EnesKanter and Steven Adams.

Who was Wall passing to last year?

Marcin Gortat is pretty underrated as a finisher but he doesn't get the same shots Adams and DJ get...and there isn't a shooter on the Wizards who hits 3s at the frequency and accuracy that Durant or Redick do..

This is actually a pretty incredible stat the more I look at our roster.

Basically, I say all of this to say, please do not forget to appreciate what we have here. We don't exactly have a good reputation as a fan base and honestly some of the conversations I see here make me think we do not appreciate the player we have.

It's so funny, I always hear people talk about athletes needing to appreciate that they play a game for a living and blah blah blah, but I rarely hear people tell fans they need to appreciate what they get to root for. I'm sure Cleveland feels a lot differently about LeBron after going through 4 years without him. Multiple top 5 picks and they couldn't even do what we did this year (end at .500).

If I was Wall, I'd probably do whatever I could to get out of here...plenty of teams still need great PG play, and Wall is one of the greatest. Even including last year's disappointment, this is the most playoff success the Wizards have had in what, damn near 40 years?

Like (I'm assuming) everyone else here, I'm hoping that a pretty disappointing offseason is not a harbinger of more meh play from the team, but even if the team disappoints again, it'd be nice to appreciate the only All-Star we've had since Gilbert Arenas, Caron Butler, and Antawn Jamison.