Wow. It's been a busy weekend. The news has been fast and furious, and we're starting to let it sink in.

This will serve as the open thread for July 4, the fourth day of NBA Free Agency. Also, I'll give a recap of what happened during the weekend:

TL;dr summary: We all saw Beal's re-signing coming. Now that it's done, the expectations for Beal will rise and I'm cautiously optimistic that he will meet them. Remember, a significant number of people thought John Wall was "not worth" the five-year, $80 million contract he signed in 2013, one year before he had to make it official. Now, I'd say most of us would think that he's underpaid based on these new salary cap rules.

TL;dr summary: The Wizards have solidified their bench rotation and have gotten a bit younger overall with their new additions.

With Burke's and Satoransky's arrivals, it appears that Ramon Sessions is gone in my eyes. Since Burke has just one year left on his contract and is a younger option, this move is essentially a one-year rental if things don't pan out. But let's hope it does.

I'll give my take on the Satoransky deal specifically. This is a low-risk, high-reward move, even with the amount of money being thrown at free agents right now. For the Wizards, they aren't using much cap space to sign a second-round draft pick who is looking like one of the best players in Europe right now. And for Satoransky, he waited four years before playing in the NBA so he could get a more lucrative contract than he would have received under the rookie scale.

This deal is also not too long in duration, so should he make a large impact over the next three years, he'll be rewarded handsomely with the NBA salary cap rising to even more ridiculous margins in 2017 and beyond.

Finally, as a reminder, the Wizards won't announce any of these signings until the moratorium is up on July 10 or slightly later.

Who did the Wizards miss out on?

As the saying goes, you win some, you lose some.

Who are the Wizards interested -- and are still pursuing?

This is subject to change very quickly, but:

My quick take: Mahinmi was signed soon after the story about Bourousis came out. So, it's less likely that they'll actually sign him.

Also, given that the Wizards have shored up their post and point guard rotation, a more logical area to address is the swingman or shooting guard/small forward positions. There isn't a real backup for Washington in that role besides Satoransky, and it remains to be seen if the Wizards are set keeping Otto Porter AND Kelly Oubre next season. I just don't see both playing in Washington long term.

We big adieu to two Wizards players from the 2015-16 season:

And of course, Happy Fourth of July everyone! 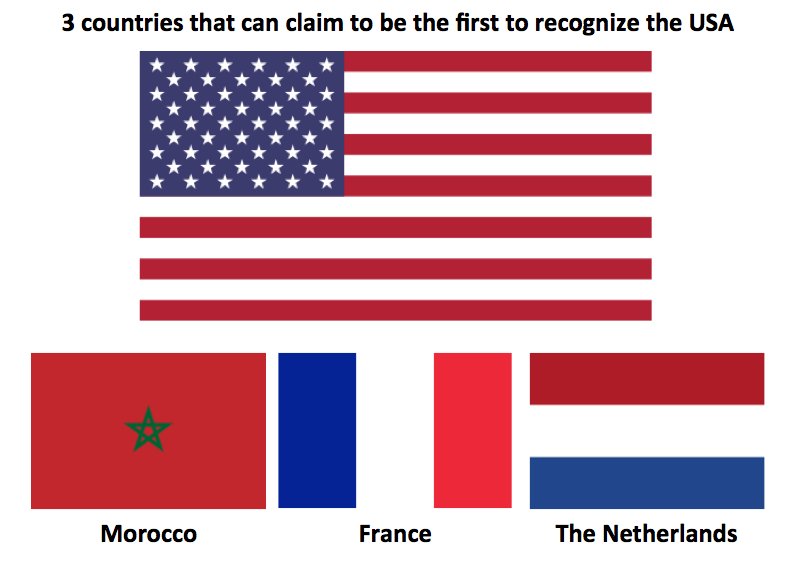 Yup, three countries claim to be the first to recognize the USA as the USA!

Today is July 4, the day that the United States celebrates its birthday! Here is a random fact I'll get to in a sec.

As Americans, we'll celebrate the United States' birthday on the date the Declaration of Independence was signed back on July 4, 1776, during the American Revolutionary War.

If you aren't American, you'll also know that the date the United States was internationally recognized was on September 3, 1783, when the Treaty of Paris was signed. That was when Great Britain -- now part of the United Kingdom -- recognized the USA as a separate nation.

Three countries can claim that they're the first to recognize the United States as a sovereign state. I'll let them fight over that title, but here they are:

1. Morocco - In the history books you read in grade school, the only countries that were significant in American colonial history include Great Britain, Spain, France, and the Netherlands. But the first country to claim diplomatic ties on paper with the USA is in the Middle East. Morocco signed an agreement with the USA on December 20, 1777, to establish relations because American ships were often in Moroccan ports to seek protection from pirates.

However, this wasn't a formal treaty and the Moroccan-American Treaty of Friendship wasn't signed until 1786. Though the treaty was signed 230 years ago, it is still in effect today and is the longest unbroken American treaty with any country. The Moroccan Embassy has a link to it the nations' shared history here.

2. France - The first nation to sign a treaty with the United States is France in the Treaty of Alliance on February 6, 1778. The French agreed to provide the Americans military support if the British attacked. And they did. Since the French joined the American Revolutionary War, they turned it into a European War since they declared war on Great Britain too. Without French support, good chance that history may be re-written.

3. The Netherlands - The Dutch also claim to be the first to recognize American independence according to their government. The "First Salute" of the American flag by non-Americans happened at Fort Oranje in Sint Eustatius on November 16, 1776. Sint Eustatius is located in the Dutch Carribean. The American government doesn't recognize it until 1782 when John Adams, who was a diplomat at the time, went to The Hague where he was accepted as such.

Regardless of what country you think should be the first to accept American sovereignty, it's still a national holiday today in the United States. Go out and enjoy the barbecues and the fireworks (and let's hope it's not a washout. Have a great Monday everyone!