Marcin Gortat is one, but not the only reason why this Pole loves the Wizards

We return to Poland and speak with one long time fan who is a fellow member of the Wizards blogosphere.

Share All sharing options for: Marcin Gortat is one, but not the only reason why this Pole loves the Wizards

Our Wizards international fan series continues as we RETURN to Poland! As you might recall, we spoke with Ken Rabin, a/k/a WarsawKen earlier this spring.

Recently, I had a chance to speak with another Pole Bartosz "Bart" Bielecki, who contributes on Truth About It, ESPN TrueHoop’s Wizards blog. Unlike Ken -- who moved to Poland from the United States -- Bart has lived there his entire life.

In our chat, we had a chance to learn what sparked his fandom of the Wizards, which goes beyond the fact that Marcin Gortat plays for them. We hope you enjoy!

BF: Thanks for speaking to us Bart. Can you tell us a little about yourself and how you watch the Wizards and the NBA regularly from where you live? 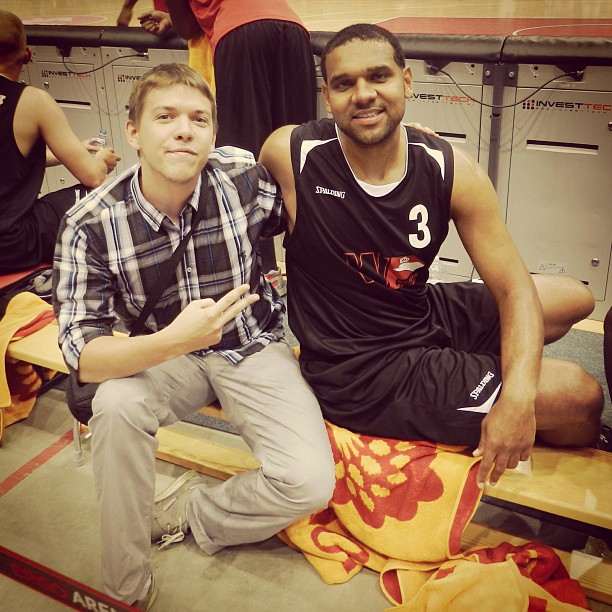 Bart: Thank you for having me. I'm a 24-year-old student from Poland where I'm doing a Master's Degree in Journalism and Communications.

Since 2014, I've written for multiple basketball websites including Truth About It, where I serve as their Polish Correspondent. At TAI I have translated several of Marcin Gortat’s interviews to the Polish media, and reported on his summer camps in Poland.

Last year I joined Szósty Gracz, a Polish NBA site, where I have my own weekly column about Gortat and the Wizards. I watch games on NBA League Pass. One of the major Polish TV channels has rights to broadcasting the NBA, but it's only about four games a week. Sure, Gortat is a Pole, but they rarely show Wizards games. Besides that, they have a terrible commentator, which many people can't stand.

I watch most of the Wizards' games live — especially the home games — which usually start at 1 a.m. Central European Time since we are six hours ahead of Washington. It became quite cumbersome once I started a regular office job a few months ago, and had to change my viewing habits somewhat.

BF: What Wizards moments have inspired your fandom for the team?

Bart: I’d be lying to you if I didn't say that the Wizards’ 2013 trade for Marcin Gortat was not a defining moment. Of course, that trade isn’t the only defining one.

Before the trade, I had some teams that I liked more than others, and the Wizards always were one of those teams. I started watching the NBA in the 2000-2001 season, just in time to catch Michael Jordan’s playing years. Although I can't recall those times very well, I know I kept rooting for him, as he was criticized for not coming back to the Bulls, and not playing as well as many expected.

I also rooted for Washington during the Gilbert Arenas era, especially during their playoff games against the Cavaliers. But my true, die-hard fandom for the team was sparked by the aforementioned trade. I followed Gortat's teams closely before, but never have I fallen so deeply in love as I have with the Wizards.

I may follow Gortat closely, but I'll give a slight edge to Bradley Beal over John Wall. The aspect of his game that I like the most is pure shooting, and that's what he does.

Beal's also quite athletic, and proved on multiple occasions that he can be an elite defender. When it comes to Wall, I love how good of a human he is, I felt really touched after the very emotional game against the Celtics that he dedicated to Miyah Telemaque-Nelson, and the even more emotional post-game interview. Wall is a very underrated player in this league, which somehow makes me like him even more.

Bart: Paul Pierce. I have always admired the Celtics over the years, so when The Truth replaced Trevor Ariza on the Wizards, I was truly happy.

Pierce represents the older generation of players which is a dying breed now. In Pierce’s day, stars focused on winning by any means necessary, with no friendships on the court allowed. That's partly why he had a very successful career and why he was such a tremendous locker room presence for the Wizards when it mattered most.

We all remember the "I called game!" shot to beat the Hawks in Game 3 last year's playoffs.

It left me in such awe that I couldn't sleep that night — the night before the Polish Presidential elections. The next morning, I was still thinking about that shot and voted Pierce for President of Poland. Gortat somehow got wind of it and tweeted it out:

This is crazy...!!!! Paul P. On voting cards for president in Poland :))) #dcrising pic.twitter.com/Vb7nRIcJkx

I even created myself a little memorabilia of that event.

BF: Where does Marcin Gortat rank among all Polish athletes?

Bayern Munich star Robert Lewandowski is undoubtedly the number one athlete. In fact, he's currently one of the brightest soccer stars worldwide, and soccer is by far the most important sport in Poland. Lewandowski is also the best paid Polish athlete.

When it comes to number two, I think it comes down to Marcin Gortat and tennis star Agnieszka Radwańska. Radwańska has been regarded one of the top tennis players in the world for a few years now, but she tends to win only minor tournaments, and found little success in the most known tennis tournaments like Wimbledon.

Gortat is well-recognized in Poland, he often appears in the media. Despite not winning an NBA Finals, his career has been very successful.

BF: What would you like to see the Wizards do on the free agency front, and should they trade their way back into the draft?

Bart: I don't think the Wizards should trade for picks, because they don't have enough assets to acquire one the top 10 picks (I consider Beal and Wall to be untouchable), and I value the remaining players (Otto Porter, Markieff Morris, Marcin Gortat, Kelly Oubre Jr.) to be more valuable than players drafted with later picks.

If I were Ernie Grunfeld, I would obviously offer Kevin Durant a 4-year max contract and see what he does.

Though I doubt KD leaves Oklahoma City this summer, I'd try to pursue another All-Star caliber player like Nicolas Batum, Al Horford or Hassan Whiteside (and trade Gortat if they sign Whiteside). Another option for the Wizards is to go after very solid players like David West, Ryan Anderson or Al Jefferson, to bolster their rotation behind Morris and Gortat.

I would offer a contract to either Ramon Sessions or Jared Dudley. I like Dudley more. However, he wasn't himself while playing alongside Sessions, who is a very capable backup for John Wall, but he doesn't make his teammates better. The team is also in need of a quality backup shooting guard. If the price is right, I'd try to get a player like Arron Afflalo.