The John Wall Era is well-appreciated in Manila

Share All sharing options for: The John Wall Era is well-appreciated in Manila

We spoke with Anton Tioseco, a Wizards fan from Manila, the capital of the Philippines. In our Q&A, we learned about what makes him a Wizards fan.

BF: Thanks for speaking us Anton. Can you tell us a little about yourself and how you watch the Wizards and the NBA regularly from where you live? 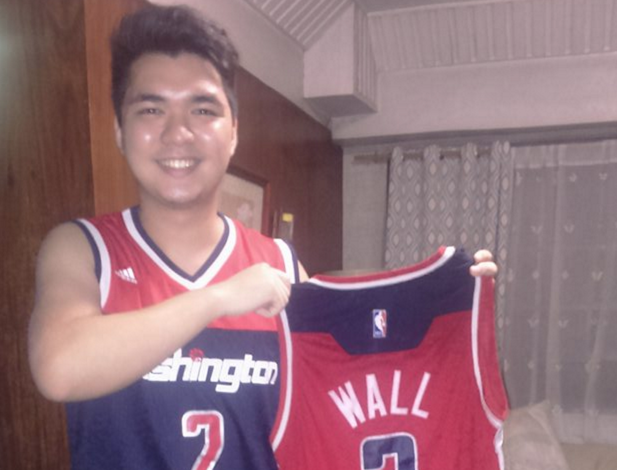 Anton: I am from Manila. Our country LOVES basketball so it is pretty easy to watch the NBA here. They regularly show games on both free TV and cable TV. We even have a special channel dedicated to basketball (Basketball TV/BTV) with around 80 percent of its content NBA related.

It is even easier to watch NBA these days with NBA League Pass. The main difficulty in watching is due to the time zone difference. Live NBA games show are broadcast in the morning, making weekday games difficult to watch. That said, the Internet somewhat compensates for that.

BF: What Wizards moments have inspired your fandom for the team?

Anton: I have never gone to a Wizards game in person, nor have I gone to the States. It is part of my "to-do" bucket list however. My Wizards fandom blossomed during the mid-2000's during Gilbert Arenas' heyday, but my favorite moments watching the team were during the Wall years.

The best games I have watched in full during the morning here would be Game 3 against the Hawks in the second round of the 2015 Playoffs (the Paul Pierce "I Called Game" win) and the Dec. 8, 2014 game against the Celtics (the win for Miyah game) that went into double-OT. Wall just took over in the 2nd OT and had that very emotional post-game interview with Chris Miller.

Anton: I am a relatively young and new Wizards fan, so my favorite Wiz player of all-time is still John Wall.

Anton: I personally liked Blatche's talent and skillset and I rooted for him to put it all together in DC and grow with Wall. As we all know, that didn't happen.

The news of his naturalization was mixed actually. Of course, there were people who were happy because Blatche is a proven NBA talent and would definitely help the team. Yes, his past with the Wizards wasn't great, but most of the negative sentiments were mainly about the fact that he didn't even have any connections to the Philippines. He never went to the Philippines in his life before playing in the World Cup. Filipinos are very passionate about basketball and have great pride and emotional attachment with the national team, but being attached to Blatche is more difficult because he had no ties with the country.

Most appreciated Blatche's stellar performance in the 2014 FIBA World Cup, but those negative sentiments still carried over a bit into future competitions. He had a relatively subpar showing in the 2015 FIBA-Asia Championships due to playing out of shape. This irked many Filipinos, questioning his commitment to the team and to the country.

However, he has shown up in better shape this time in preparation for the 2016 FIBA Olympic Qualifying Tournament. I got to watch him live when they played a tune-up game against Iran just last week, June 8, here in Manila. He played well in the 81-70 win and really displayed some passion and a connection to the crowd during the last few minutes of the game when the Filipino team was pulling away.

Manila will be hosting Groups A and B of the FIBA OQT and I feel like (along with good performances) playing in front of the home fans will go a long way in developing Blatche's connection with the Filipino people.

BF: What would you like to see the Wizards do on the free agency front, and should they trade their way back into the draft?

Anton: I was very optimistic coming into the 2015-16 season and, like all of the other Wiz fans I was ultimately left very disappointed with the turnout. However, I still really like the core of the roster and I still believe that, with the right coaching and steady improvement, we have the best shot at beating the Cavs in a playoff series among all the teams in the East. (I really felt like had we reached the 8th seed towards the end of last season, we had a fighting chance against the Cavs).

Plan A in free agency is definitely Kevin Durant (On an emotional level, I don't like this move because I want the Wiz to still be Wall's team, but I have to be objective about this and KD will definitely help the team. Plus, Wall has endorsed him). I want the team to also re-sign Beal. I feel like the max is too much for him, but the cons of losing him in free agency outweigh the pros so they should keep him.

A capable back-up PG is also important as the Wiz have really been killing itself the last few seasons every time Wall rests on the bench. Another pressing need is a quality backup big man. If Otto Porter doesn't develop into a capable stretch 4 in pinches or if  KellyOubre doesn't develop as a solid option at SF, then I really want a stretch 4 who can come in and maybe slide Markieff Morris into the 5 slot from time to time. I won't go into more specifics but in terms of other free agents, I just want the team to get dynamic players (preferably shooters and defenders) that would fit the mold of the team and buy into Scott Brooks' philosophy.

I also don't think the Wizards should rule out a trade for DeMarcus Cousins. I know that many Wizards fans have discussed this and how unfeasible it is at this point. But if I were Ernie Grunfeld, other than signing KD, this is the only other BIG move I would consider this offseason (just as long as they don't give up too much).

I feel like the 2016 NBA Draft class is pretty weak so I don't really want the Wiz to trade into this draft. But if they do find a player they like that would fit the team, why not? Again, as long as they trade, they need to do it at the right price.