Our fan spotlight series continues as we talk to Rory Donnelly, a university student from the United Kingdom. Rory has never lived in Washington, but adopted the city as his first American sports town and never looked back!

Share All sharing options for: American vacations and field trips made this Scottish university student a Wizards fan

Wizards fans have grown to love their team in various ways. I'm the traditionalist.

I lived in the Washington area throughout my entire life. I grew up in the late 1980's and 1990's following and rooting for all the major local teams in town, whether it's the Wizards, Capitals, Redskins, or the Orioles (there were no Nationals in the 1990's).

But I've become quite fascinated about Wizards fans who aren't just from the Washington area. I've been on a mission to find out how internationally based fans root for us. I had a chance to speak with Rory Donnelly, who is from Scotland, one of the countries within the United Kingdom.

Like most of the European Union, the most popular sport in the UK is soccer, where the Premier League reigns in England and the Scottish Premiership is king where Rory lives. Sports fans there will be more likely to wear Celtic jerseys than Celtics ones.

Despite that, Rory still manages to get his Wizards and NBA fix, which all rooted from visiting America in the past. So without ado, here's the Q&A with Rory and his story.

BF: Hey Rory, thanks for agreeing to share your story about your Wizards fandom. What do you do? 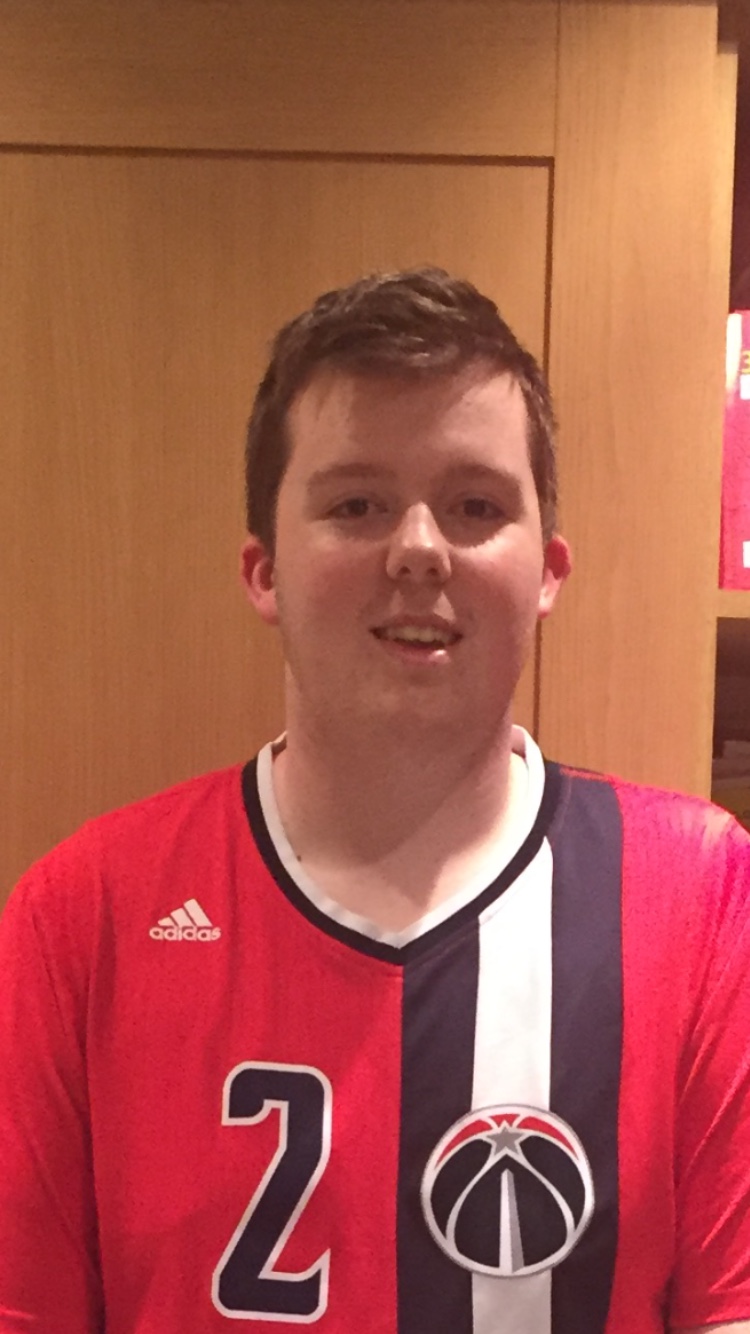 Rory: I’m a 19-year-old university student from the United Kingdom, specifically Scotland. I first got into American sports when I went on vacation to America. The first league I got interested in was the NFL and so randomly chose to support the Washington football team. (I’ll stay away from using the nickname) I believe that was back during the Jason Campbell years.

From there, I got into the NBA and figured it was easiest to support all the teams in the same city, so D.C. has become my American city of choice. I first started following the Wizards in 2012 and it didn’t take long for the Wiz to become the team I focused on the most.

In the last two seasons, I’ve been at university. Therefore, my schedule allows me to stay up late at night watching games. I spent six months in Toronto last year, so I was able to watch the games at a regular time. Unfortunately, the Wizards didn’t visit the Air Canada Centre until I was back in Scotland.

BF: What was your first memory of going to a Wizards game (if you've done so) and the best game you have seen?

Rory: The only Wizards game I’ve been to was a pre-season game at the Verizon Center in October 2013. I was on a high school trip to D.C. and we went to the game. It was an overtime loss to the Nets, but I remember it being the first time I was introduced to the Chick Fil A fourth quarter deal thanks to two consecutive missed free throws from Mason Plumlee.

The most memorable game i can remember watching is probably the 2OT win over the Celtics in December 2014. Wall carried the team in both overtime periods and refused to be beaten!

Rory: My favourite current player is John Wall or playoff Bradley Beal (if that's an option).

Rory: My favourite player is still John Wall, not really much competition there. But I did like Paul Pierce's play last season.

BF: Compared with some other countries in the European Union (ex. Spain, France, Lithuania), basketball doesn't seem to be that popular in the UK. How do you get to follow the Wizards and the NBA from Scotland?

Rory: The NBA is not very popular in the UK. The NFL has a big fan base here but it hasn't carried over to basketball,unfortunately. I have NBA League Pass so I get every regular season game.

It also helps that the time difference between Scotland and the Eastern United States helps because there is only a five-hour difference. Most Wizards games start at 12 or 12:30 a.m. and usually finish before 2:30 a.m. The tough ones to watch are the West Coast games, as they don’t start until 3:30am over here.

I watched about 60-70 regular season games in each of the last two seasons. We get all the playoff games on TV over here.

Apart from watching the games, there's also Wizards Twitter to keep up with. Bullets Forever is the main source of information along with the other blogs and reporters like Jorge Castillo and Chris Miller. It gives me somewhere to see other people's options because I have yet to find another Wizards fan over here!

BF: What style of basketball would you like to see the Wizards play next year?

Rory: I like Scott Brooks, but  I hope his hiring isn't purely an attempt to lure Kevin Durant home. I like the idea of the fast-paced game to make the most of Wall’s strengths. Major changes are needed to the roster in order for that to work.

Assuming KD2DC doesn’t happen, Ernie Grunfeld needs to get Wall some help. Without some help it doesn’t matter what style the team plays, we’ll end up being .500 or so again next year.

I would love for the Wizards to look for someone like Jimmy Butler. The rumours of unrest in Chicago would make it worth a shot. Trading Beal and pieces or picks could be worth it to give Wall an All-Star to play with. A hypothetical backcourt Wall and Butler could be as good as the Warriors' Splash Brothers of Stephen Curry and Klay Thompson.

This will be my first season without Wittman running things so I’m interested to see how it goes!

Thanks to Rory for chipping in. And as always, if you're interested in being highlighted in our international fan spotlight, click here!