The NBA Finals window has opened for the Wizards

The Eastern Playoff picture has changed dramatically over the past week, and that has left the Wizards with an opportunity to make their first Finals run since 1979.

Share All sharing options for: The NBA Finals window has opened for the Wizards

When the NBA Playoffs began two weeks ago, there wasn't much optimism about Washington Wizards' chances to make it out of the first round, much less the NBA Finals. The team limped into the postseason with a 13-15 record after the All-Star Break and were set to face the Toronto Raptors, a team which had dominated them for the past two seasons.

The roster had significant concerns: Bradley Beal had yet to become his old self after his injury, it looked like Nene would be limited by another bout with foot injuries, Otto Porter couldn't possibly be ready for playoff basketball, and the bench wasn't dependable. Many of the national talking heads didn't give them a shot, and even most of our own contributors (including myself) were picking the Raptors to take this series. But even if they managed to steal the series from Toronto, the remaining teams in the Eastern Conference playoff picture were a murderer's row of Wiz-killers.

At the top of the ladder sat the Atlanta Hawks, who went 3-0 against Washington when they played their starters this season. Mike Budenholzer had turned his Atlanta team into a Spursian juggernaut that charged hard to a 60 win season and looked like they might be only team with a chance of knocking out the whoever came out of the Western Conference bracket. Surely, Budenholzer would have been licking his chops to face a hapless Randy Wittman and the inconsistent Wizards.

Just below them sat the Cleveland Cavaliers, Washington's fiercest rival who had simply annihilated them in what could be considered the worst Wizards game of the season. LeBron James, Kyrie Irving, and Kevin Love were a triumvirate of basketball gods who had been tearing through the league ever since they took that fateful bowling trip. LeBron was hungry to bring a title to Cleveland and the Hawks appeared to be the only team with a chance to stop him from getting there.

The Chicago Bulls were the least feared of the teams above the Wizards, but the reemergence of Derrick Rose made them look like a team that could easily win in a seven-game series. Jimmy Butler's incredible season suggested that Bradley Beal wouldn't be able to get the best of him this time around, especially with how he'd played recently. The Wizards were primed to make an unceremonious exit early in the postseason.

My how things have changed... 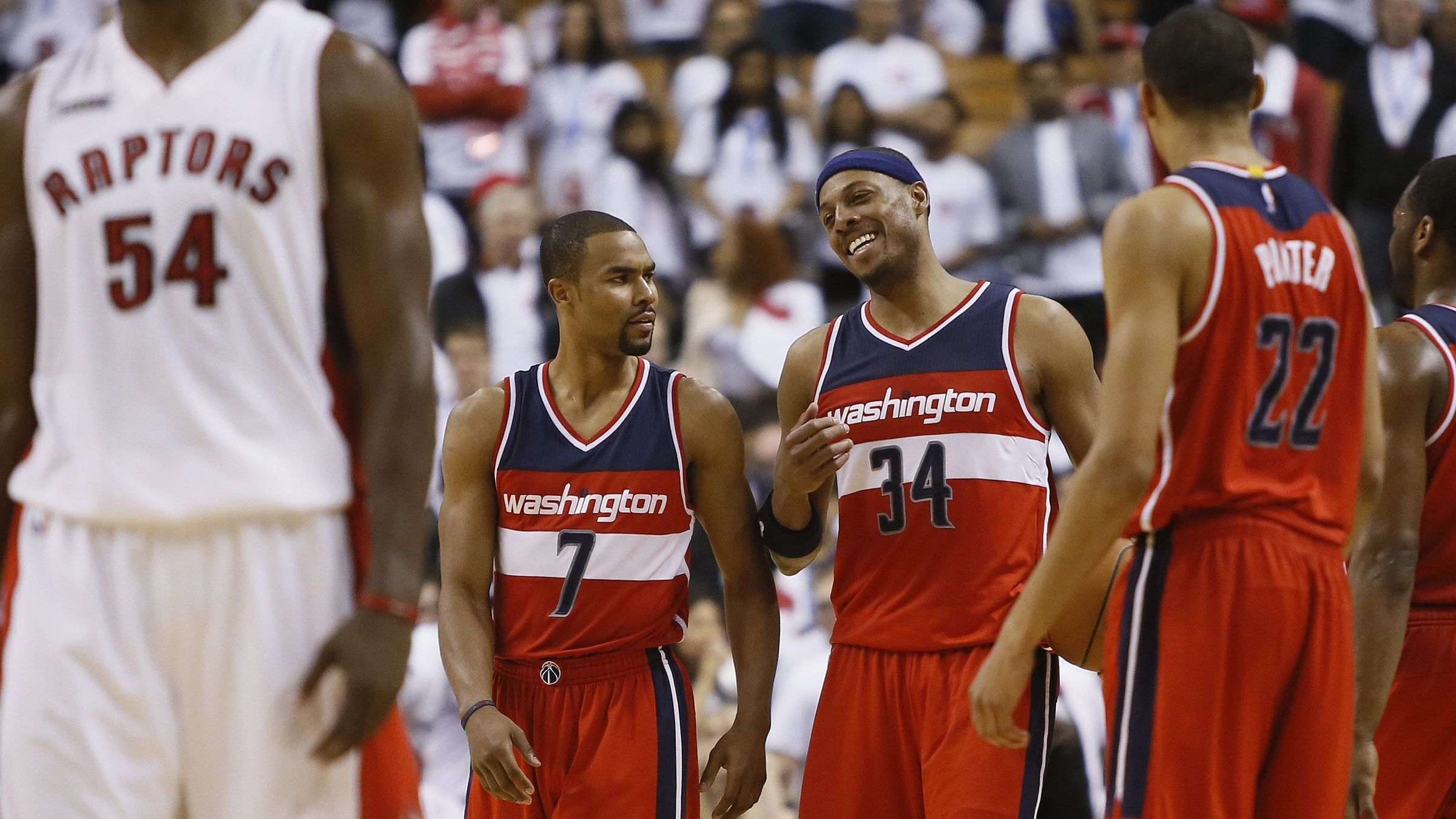 Fast forward two weeks later and suddenly Washington has more momentum than anyone could have predicted. Masai Ujiri and the Toronto Raptor fans made an enormous mistake in Game 1 by riling up Paul Pierce. The Truth reminded everyone that you DON'T FEED THE TROLL. After Pierce almost single-handedly won Game 1 for the Wiz, John Wall and Bradley Beal combined for 54 points to put away Toronto in Game 2. The Polish Hammer, Marcin Gortat, rewarded the home crowd with a 24 point and 13 rebound performance in Game 3 to all but seal the series for the seal the series for the Wizards. Game 4 turned into a victory lap. The stunned Raptors had nothing left for Washington, who celebrated their sweep at home by draining 3's with no mercy all night long. The Wizards had completed the first seven-game series sweep in franchise history and had done so in a dominating fashion. 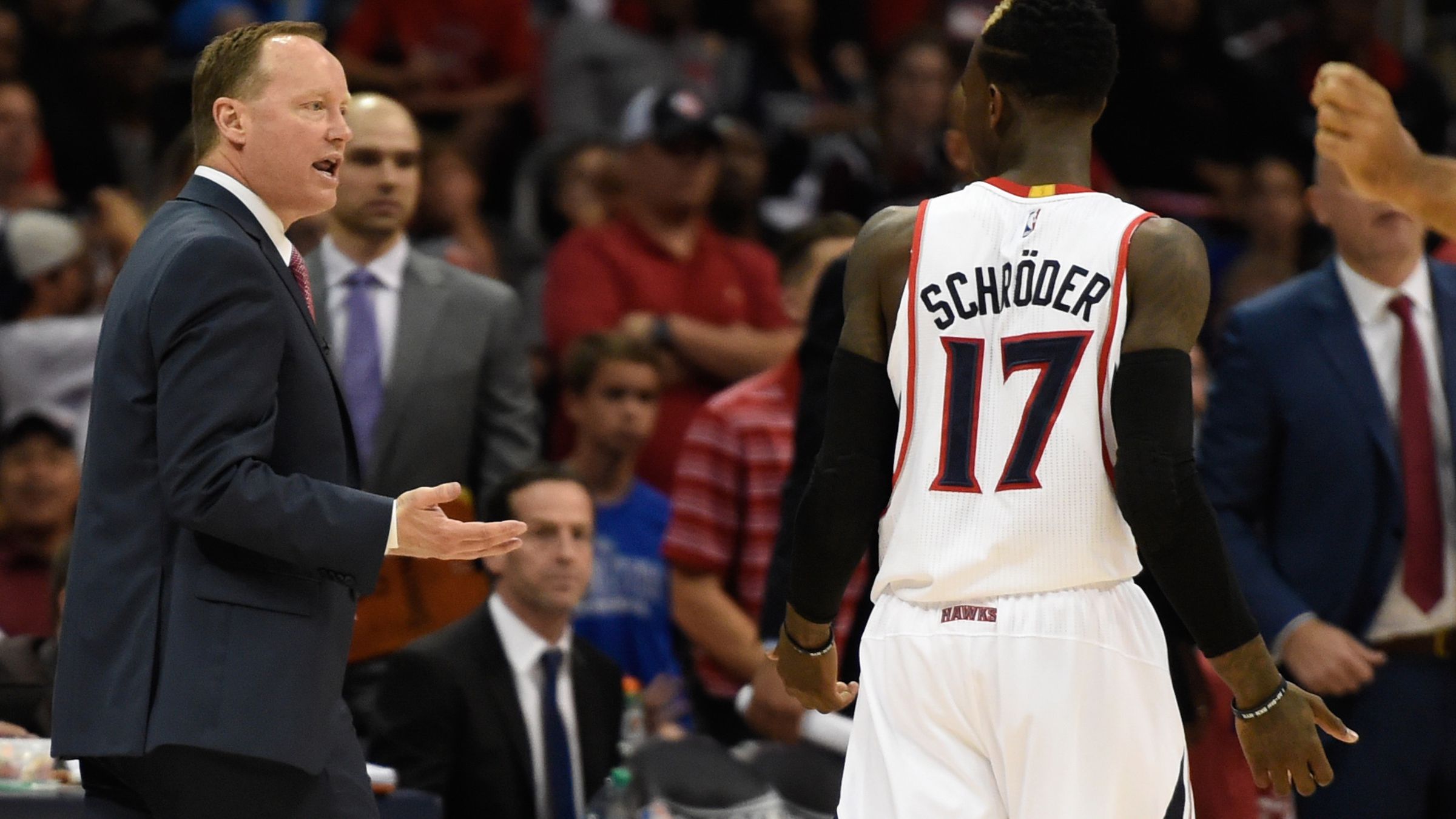 Now, as we look to the rest of the Eastern Conference, the mountain that once seemed so daunting now looks significantly more manageable. The Hawks appeared surprisingly human against the eighth-seeded Nets. At times during the series, players like Deron Williams and Alan Anderson took over games and gave Atlanta all that they can handle. The Hawks bench played very poorly, most notably Dennis Schroder. The Hawks had a -42 point differential when Dennis was on the floor. He averaged almost as many turnovers as he had assists per game and was a liability from long range. Kent Bazemore and Pero Antic deserve their share of the blame as well, as they were invisible offensively. Their starting unit is still potent enough to put the fear into Washington, but both Al Horford and Paul Millsap are battling through injuries that still clearly give them discomfort. If they struggle and Kyle Korver has a cold shooting series, it could spell disaster for Atlanta. The Hawks are still a phenomenal team, but Brooklyn showed that the cracks are beginning to show and Washington may just be able to take advantage of that to steal the series.. 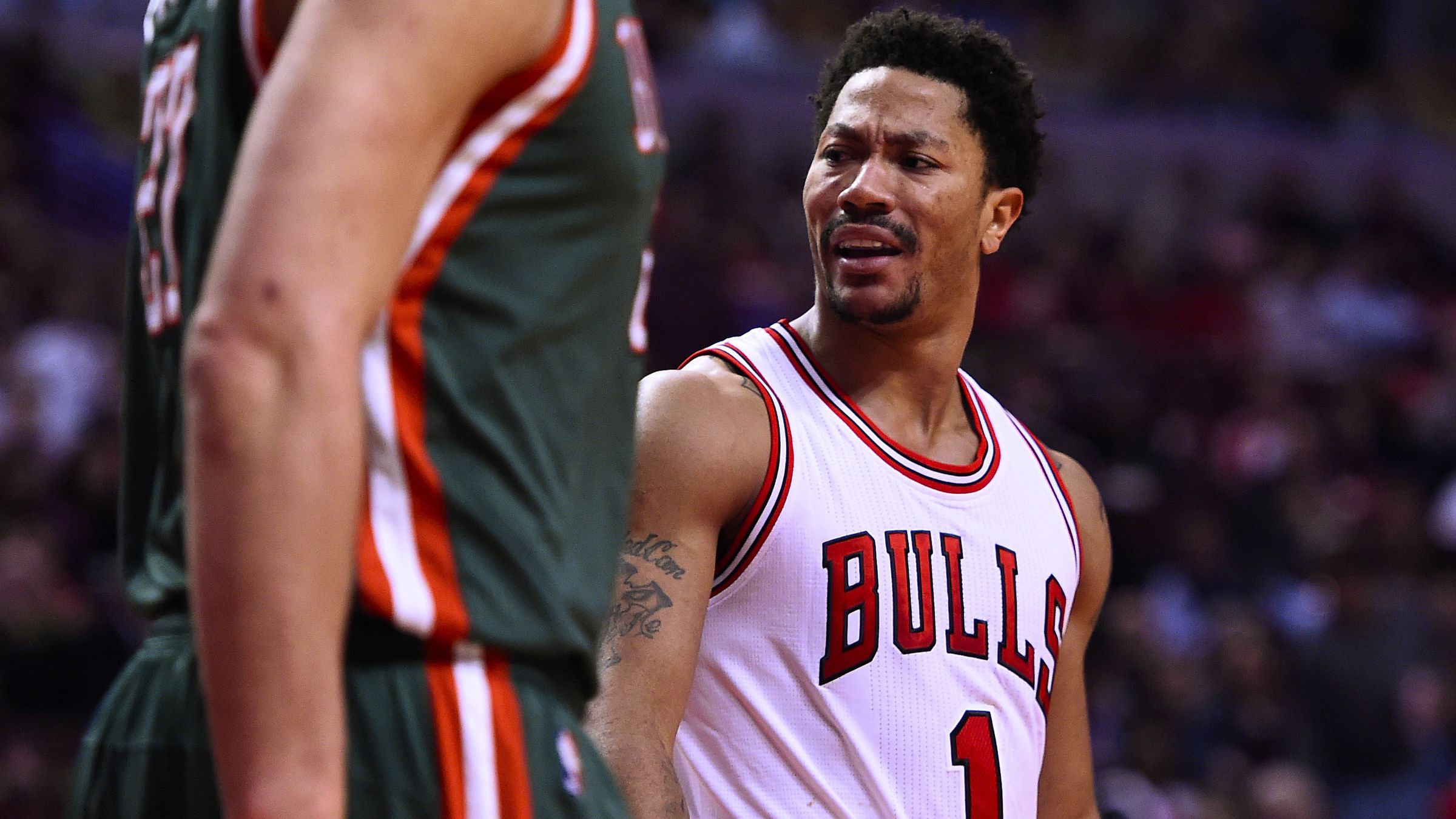 If the Wizards make it past Atlanta in the second round, we will be treated one heck of a Eastern Conference Finals. Awaiting them in the ECF would be either the recent rival Chicago Bulls or the long-time rival Cleveland Cavaliers. Either way, we have some serious bad blood against these teams. Cleveland is the favorite to win that series, but if the Bulls pull off the upset Washington would match up well against them.

No Washington fan needs to be reminded of the beat-down the Wizards gave Chicago in the first round of last year's playoffs. This year probably wouldn't be too different. Derrick Rose scared everyone in the East when he had a strong first three games in his series against Milwaukee, but then was dreadful in Games 4 & 5. Not coincidentally the Bulls lost those two, before Rose came back to Earth and delivered a solid performance in Game 6. Derrick Rose will continue to have off-games in a series against the Wizards, which will allow them to steal key games from the Bulls. Another factor to consider is that Rose has been unable to take care of the basketball. He's currently averaging 4.3 turnovers in the postseason. This will play right into the hands of the Wizards, who are at their best when they can get opportunities for transition buckets. While Jimmy Butler is still the best player on the Bulls roster, they will live and die by the play of D-Rose. If the Wizards can take him out of his rhythm, I don't see Jimmy Butler being able to carry the weight of the Bulls offense by himself for seven games. 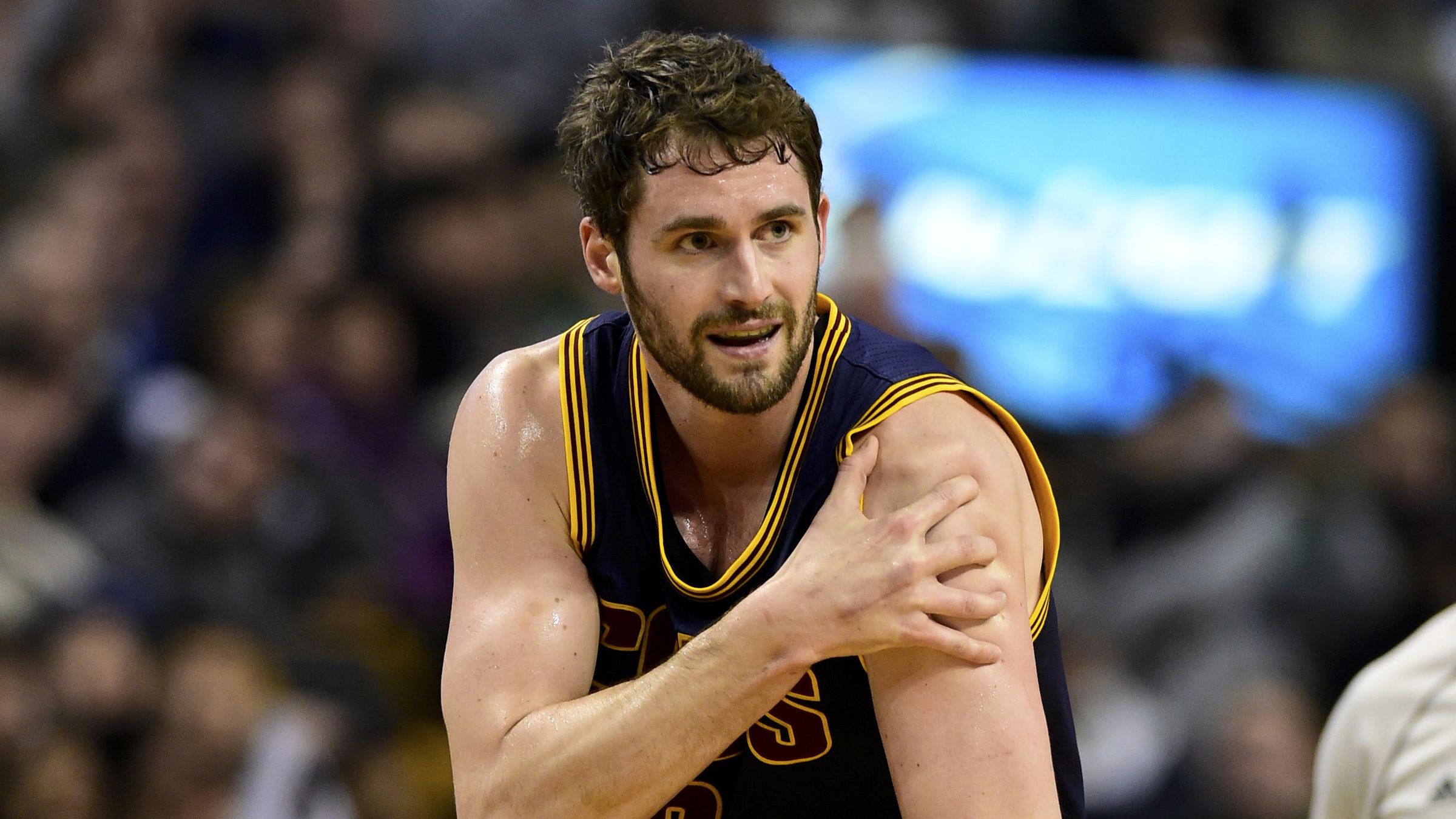 Beating Chicago for the second year in a row would be incredible, but there's no denying that nothing would be sweeter than denying LeBron James and Kyrie Irving's first run to the Finals. Cleveland looked unstoppable as they sailed through their series with the upstart Boston Celtics 4-0. They showed off their well oiled offense but this time it was also paired with a surprisingly stingy defense that held the Celtics to just 94.5 points per game. Unfortunately for them, things got a little too chippy in the series finale. Kevin Love's arm was ripped out of it's socket by an overeager Kelly Olynyk, officially ending Love's season. This could be catastrophic for Cleveland's offense. While Love is not scoring nearly as much as he did with Minnesota, the threat of him shooting creates spacing and driving lanes for Kyrie Irving and LeBron James. Tristan Thompson and Timofey Mozgov won't be able to replicate that offensive threat. Any team with LeBron James on it will be a tough out in the playoffs, but Washington's defense will have a significantly easier time dealing with whatever Cleveland throws their way. Oh, and did I mention Paul Pierce LOVES playing LeBron James? This could potentially one of the most exciting playoff series in Wizards history, and there's a good chance they could take it.

This year is a rare opportunity for Washington. They have momentum, other contenders are faltering at the right time, the House of Guards are both playing well, and Paul Pierce is the playoff boogey-man. Plenty of things can still go wrong. If John Wall can't stay hot or if Randy Wittman gets severely out-coached, there's a good chance they don't even sniff the Eastern Conference Finals. But if the Wizards can play with the same level of execution and intensity that they displayed in Toronto, they may just surprise everyone and represent the East in June.

Note: The author of this article may be completely delusional about the Wizards Finals chances. Please adjust your expectations accordingly.