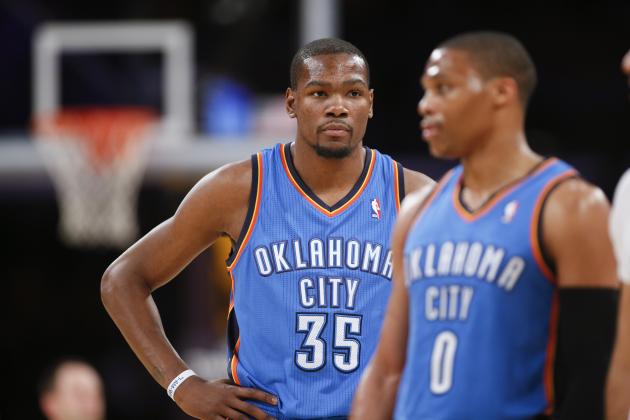 Man...What a season it's been.

From the Cavs streaking right before All-Star Break to the Atlanta Hawks playing peek-a-boo to the whole Eastern Conference you could say this season has been a good one. But more recently the main headliner for the NBA has to be it's best player Russell Westbrook busting out as a primary candidate for the Most Valuable Player Award.

With numbers like that you can't help but ask one question...

Are the Thunder fine without Kevin Durant?

The Thunder are 5-2 since Durant went out with a foot injury and every game since Westbrook has had a double-double or triple-double. When Kevin Durant hits free agency in 2016 teams are going to break the bank with him due to the fact that he will be the best player on more than 90% of the NBA. But as of right now, he isn't playing like the best player on his own team.

The Wizards, on the other hand, haven't seemed to find their footing yet with such an impressive start to the season. Scoring droughts and poor offensive execution seems to be a norm for Wizards fans like myself. Durant would be just the piece the Wizards need to contend for a championship where as the Thunder are looking fine right now without him. With all the attention to Westbrook, Kevin Durant is becoming what he has feared his entire life, the 2nd place man.

With me being a fan put aside, you can say that this whole #KD2DC movement may soon become a reality. We've seen how Oklahoma City has responded to Kevin Durant before when he wasn't meeting expectations.

We are here with open arms Durant.

Does the success of Westbrook push KD even more to come to DC?