Martell Webster Defines His Life Outside Basketball Through Music

Martell Webster doesn't care what people think of him. Talking with the charismatic small forward, he frequently mentions his lack of concern for people's expectations for how he's supposed to behave as a professional athlete and for all the trappings that go along with that lifestyle. The more he talks, though the more you can sense his intense desire to be taken seriously in his newest endeavor in music and to defy expectations for his abilities. "Expectations where here's some athlete that thinks he can rap," Webster says of playing his music to others.

Of course, he knows what people will say. "A ball player dabbling in music? How novel!" Shaq, Chris Webber, Kobe, they've all done it, as have many less known players to varying degrees of success and quality. And this is by no means limited to players, as anyone who has been treated to the musical talents of one James Dolan can attest.

But Webster wants his music to be judged on its merits and takes special pride in the compliments he said he's received from people who make music their life. He beams when he talks of sharing his creations with D.C. area artist Phil Adé.

Webster, dressed in compression tights, gym shorts and a Bruce Lee T-shirt, came into the Vox Media offices in Washington, D.C. to talk about A.R.T (Anybody Relates to This), the new album he recorded under his stage name Sui Generis, and to show us the video for the first single, "Disposition." Martell is animated with an infectious enthusiasm. He gesticulates with his hands, while laughing and flashing a big smile, occasionally embellishing his monologues with verses from his songs and anecdotes from his life in basketball and music.

After 10 years in the NBA, Webster knows his value as a basketball player. He was heralded for success at a very young age, starting at Seattle Prep and in 2005 becoming one of the last straight-from-high school lottery picks selected in the NBA draft. Basketball success came early. Finding his voice as a musician has been a longer process, one that took years before he was comfortable sharing anything publicly.

Throughout our discussion, he mentions the doubts that people have when hearing yet another NBA player making music, and how he wins them over with his abilities.

Martell grew up Seattle without his biological parents: his mother went missing (presumed to be murdered), and his dad wasn't in his life. His grandmother who helped raise him, was protective of the kind of influences that entered into young Martell's life.

"What's associated with hip hop and rap?"  Martell asks rhetorically. "That's a lot of drugs. She didn't want me to go that route so she sheltered me away from that."

He found a way to explore his interests, sneaking off with his cousin to listen to new tunes. "Hanging out with him, I was able to listen to all this stuff." Webster explains. "That's where my ear for hip-hop came. Kris Kross, e40, Bone Thugs-N-Harmony, Jay Z. It opened a gateway."

His cousin and friends would work on their amateur music in their garage. Seeing people actually create something had a lasting impact on Webster.

"Hey! They're making music. I thought you only hear this on the radio. I had no clue what was going on but I loved it."

Though he may have been too bashful to start writing music then, he finally starting to get into it in his first season in the NBA.

"I was writing ever since I was able to make a beat," Webster explained. "It was a way for me to see where I stood with it, and see if it was something I wanted to pursue as a hobby. It wasn't great, but to me it sounded great, because it was like, ‘I did that'."

Moving to Minnesota to play for the Wolves, he increased his involvement in music, talking to producer friend Charles Hopper (who would produce much of A.R.T.) back home and learning the technological tools of the trade. Gradually, he accumulated equipment in his home studio and was urged by Hopper to put something together for public consumption. Webster demurred: "I kept making music, just never really having the confidence to release it and say, ‘Yeah I can definitely make a mixtape and put it out.' Not yet." 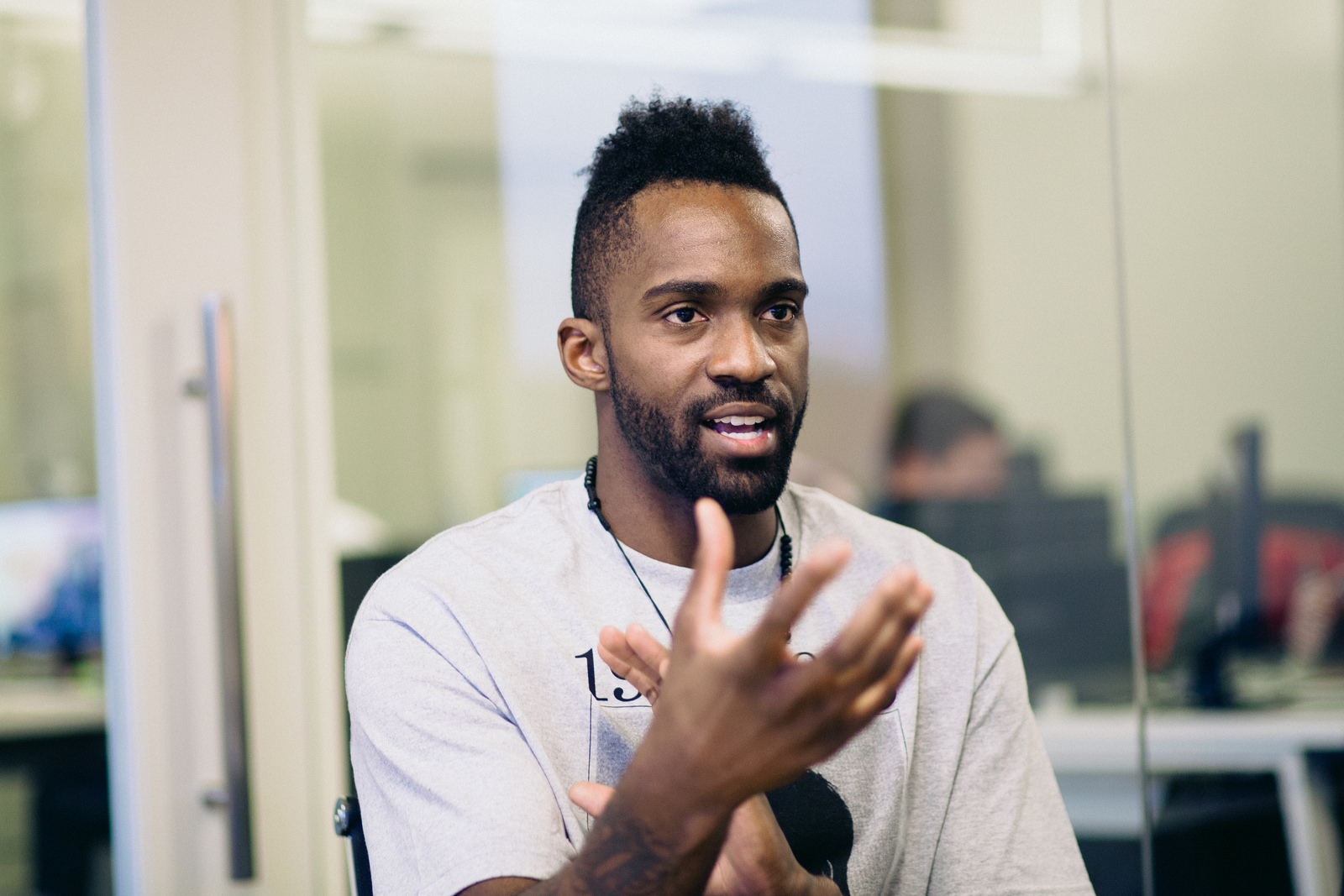 It wasn't until he came to Washington, however, that he embraced the idea of actually making something to put out to the public. He was introduced to a Portland hip-hop producer named Neill Von Tally, who opened Martell up to a whole range of sampling that he hadn't worked with before.

Von Tally was the first person outside of Webster's group of close friends that Webster let hear his music. "So I started spitting for him, and he was like, wow I didn't expect that."

We'll have to wait a bit to pass out own judgements. Martell's album's release date is not set, but we can expect to hear the full album in the next few months.

The writing process for the album continued through Webster's second season in Washington, which saw him struggle with recurring back issues that led to the third surgery of his career.  He didn't seem the same joyful, smiling persona he was in his first year in Washington, and his play on the court wasn't on the level that earned him a four-year contract extension with the Wizards.

Webster acknowledged that he wasn't in the best place mentally or physically. "There's an internal struggle in anything you may do in life," he said. "You are going to go through some type of adversity, and for me my minor setbacks were my back, which has always been a problem for me. I was having chronic back issues, it just put me in this element. I was essentially in minor depression, I fight so hard to make sure that I am healthy, so why is this happening to me?"

Part of this is expressed as Webster goes into verse again, talking about how others can't understand that his success in life didn't come without sacrifice:

yo, everyone's happy to hear it
Happy you're there
Dog you done made it, look at this mess you created
We're about to kill it this year, all of this love from your peers
Then they just eat it right up but they don't know all of the tears that I shed over years

But creativity can sometimes come from dark places and Webster felt that his struggles spurred his songwriting. NBA players have a lot of downtime. Time between practices, time between shootarounds and games, time on the road. Webster filled this time with writing out lyrics, typing into his iPhone notepad while on the team plane or wherever else inspiration struck to express his feelings.

Those feelings are in part the expectations he felt were placed on him for coming into wealth and fame at such a young age. "Now that I've come into some success people think I'm going to care about all of these things I truly don't care about. You're going to buy drinks at the club. Buy a Ferrari. That's what everybody's doing.  For me it's like ... Damn. This is what I have to deal with? I really don't care about any of that stuff."

His financial success can come with a feeling of obligation on the part people he knew before he was a millionaire professional athlete.

"People using you. You help them out. They ask how's your grandma doing. But really it's really about: can you help me out?"

Webster first met his biological father at a family reunion just weeks after he had been drafted in the lottery by the Portland Trail Blazers. He found it overwhelming. "There were so many questions I had for him," Webster said. "Why now? Why are you coming into my life? So I kind of just shut him off, and just told him to go back home."

Only in the past several years has he been able to get to know his father and, in the process, get to know himself. His obsession with making music this past decade has made more sense to him now that he knows his father is a musician. "It's in my blood," he says.

As we finish our conversation, we led Martell to a space at Vox headquarters where a projector screen is set up to play his video to a crowd of employees. If Martell is nervous to show his video to a room full of strangers, he certainly doesn't show it. The only concern at this point is to actually get the video and sound to work for the presentation.

If anything, his confidence seems to grow as the video starts to play.  A beautiful vista of the San Juan Islands in Washington appears as Webster and collaborator Von Tally rap over a stilted beat and a piano samplesong from 1940's loops. The music is credible and the visuals are impressive, the work of people who take their craft seriously. The video is very well received by those in attendance.

Whatever reservations Webster has about showing his work to others have receded. He says most of the players on his team have heard his stuff and have given him positive feedback. I ask what his old school coach Randy Wittman's reaction would be to hearing his music. Webster lets out a big laugh, and approximates Wittman's response: "Aww, are you shitting me?"

As always with music, you can't please everyone.