The Wizards' superstar has already arrived

Who is the Wizards superstar of the future? Who has struggled this week? Is Jan Vesely still alive? This and much more in the weekly Wizards Sunday Summation.

Share All sharing options for: The Wizards' superstar has already arrived

This week's news was mostly dominated by one player. A player who is a hero in D.C. and has captured the imagination of it's fans. His mere presence ignites the districts passion for basketball in ways that we haven't seen in decades. The player's name is chanted throughout the Verizon Center in his presence and still whispered in his absence. He is seen as the potential savior of Washington D.C. hoops.

I'm talking of course about Kevin Durant. Who did you think?

Durant is a phenomenal basketball player and human being. A 5-time All-Star and reigning MVP, he has also established himself as one of the nicest people to ever walk the planet Earth. His resume certainly cannot be questioned. However, KD is a player who has never suited up for the Wizards, nor has ever played collegiate basketball in the DMV area. Durant is someone who plays halfway across the country (approximately 17 hours away) and has thus far, given us no real reason to believe he'll be coming back. He should not be the reason the D.C. area takes notice of the Washington Wizards.

This is not a Kevin Durant problem. This is a Washington sports fan and media problem. The excitement and coverage that Wednesday night's game generated had to be one of the biggest spectacles (in the regular season) surrounding the Wiz in the last decade. I'll even admit I was part of the problem. Durant is a superstar, but he is not yet our superstar. We have someone much more worthy of our immediate attention.

John Wall is our superstar. He's starting in the All-star game this year, an MVP candidate, and leading our team that is competing for a #1 seed. Durant cannot claim any of those accomplishments this year. John should be the reason the Wizards sell out games and get extensive coverage. We shouldn't have to wait for Kevin Durant to make the Wizards relevant, because John Wall has already done it.

This was a quote from John Wall after learning of his selection to the All-Star team:

"What's next out there for me is MVP. That's my next, ultimate goal," he said. "My main goal is to bring a championship back to D.C. I feel like if I don't bring a championship to D.C. my NBA career isn't complete. That's just how competitive I am and just how much this city means to me."

Wall's entering his prime, and he has progressed fast enough that both of those goals could become a reality sooner than we think. He is currently 4th in SB Nation's MVP race, and the Wizards have a decent shot to win the Eastern Conference crown. Even if it doesn't happen this season, Wall's game will continue to evolve. However, the biggest thing to take away from that quote is the commitment to winning in Washington. No matter what Durant decides in 2016, we can rest assured that our superstar will be here until 2019.

So stop looking for a savior Washington, he's already here. 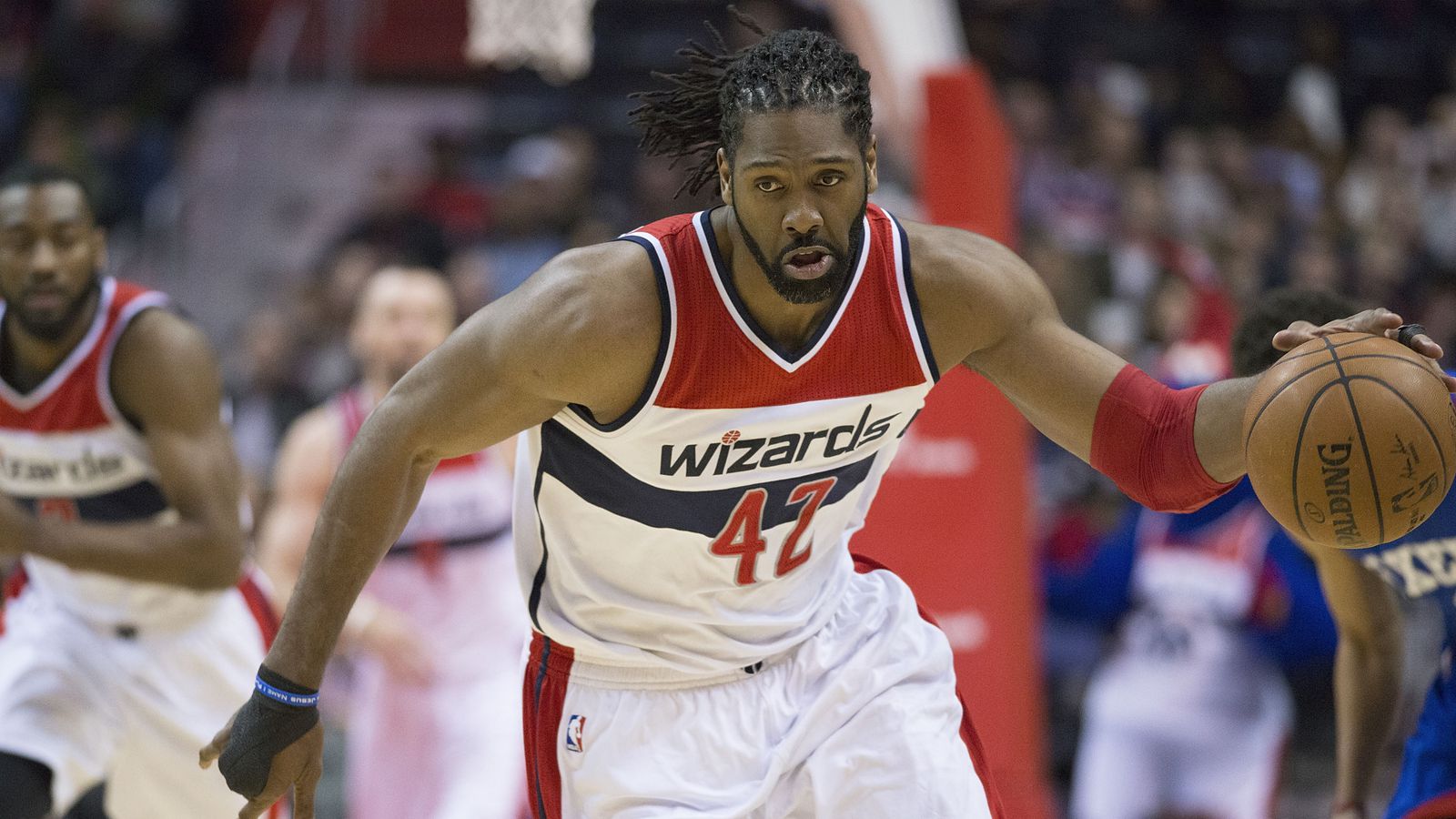 Last week. many of you took exception to the fact that I picked Kris Humphries over Kevin Seraphin in the "Trending Up" section. Well, you Seraphin fans are going to have to wait another week. This week was really between John Wall and Nene, but I gave the nod to Nene since I sang Wall's praises in the paragraph directly above this one.

Nene saw more action than he's used to this week. The big Brazilian hadn't played more than 30 minutes since his foot injury earlier this season, but he managed to play 34 minutes on Wednesday against OKC and was even our high scorer (he shut down Serge Ibaka too). Nene averaged 17 points a game this week, which is a very solid week offensively for him. He filled up the stat sheet in different ways each night, the most interesting being his 4 steal game against Philadelphia on Monday. However, the biggest reason to get excited about Nene's recent play is he has started to develop his three-point shot. There's still plenty of work to be done, as he's only hit 1 of 5 thus far. But this could be a great way for him to extend his career. #Pray4Nene 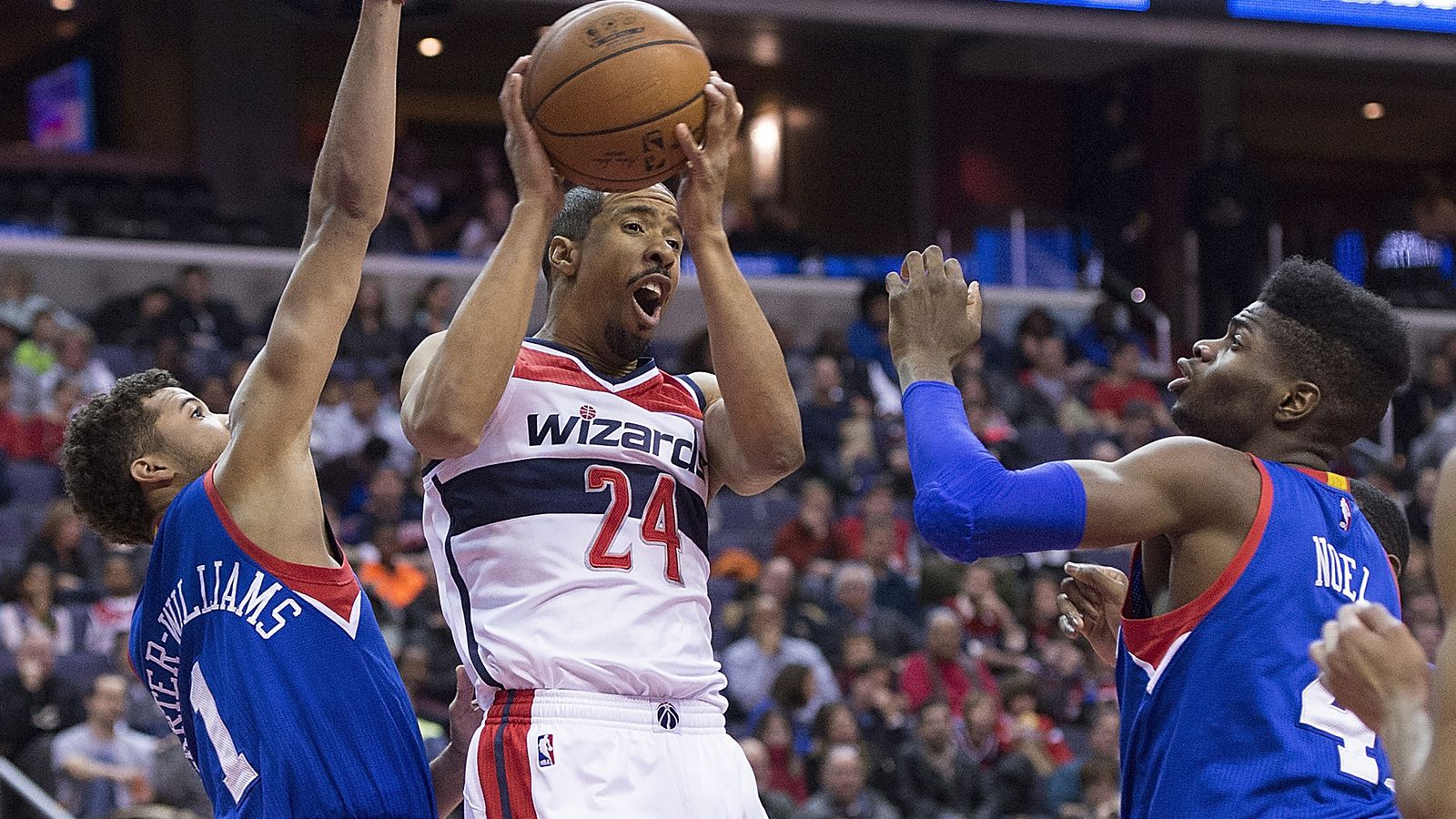 The name here could easily be Marcin Gortat, who has been in a bit of a slump recently. This was especially evident last night when Marcin had very little going for him offensively. But Andre Miller failed to get the bench going in the OKC and Portland games, which ultimately put too much pressure on the starters. Over three games this week Miller averaged 2.3 assists paired with a paltry 1.3 points per game, that is not the offensive spark this bench needs. Miller is an old vet who plans to be in the league for the foreseeable future, but his slower pace is a stark contrast to the fast break happy Wizards when John Wall is on the court. He needs to figure out a way to keep this bench productive or he will become known as a liability. 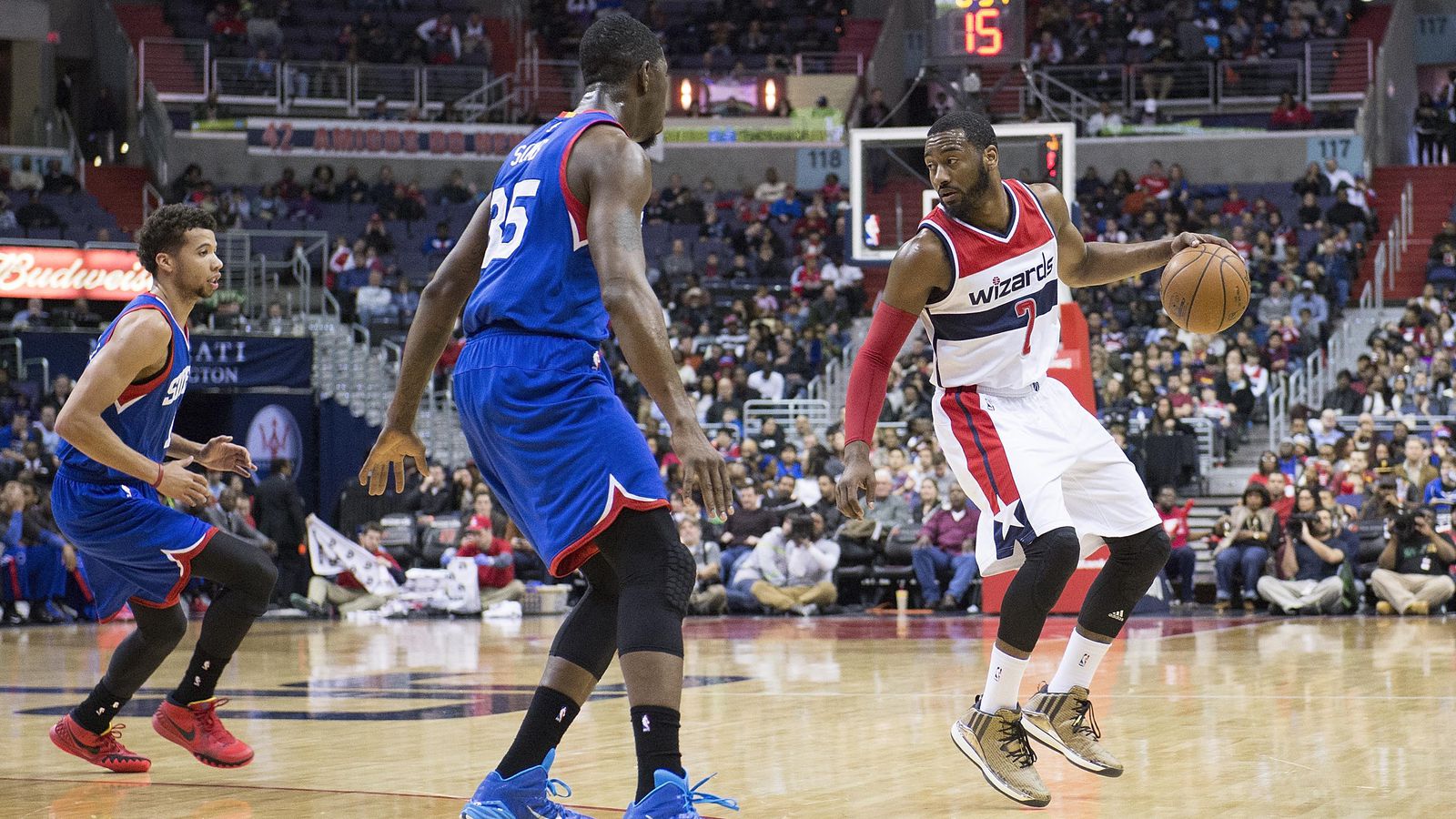 The week started easily enough for the Wizards. They completely dominated a hapless 76ers squad and held them to their namesake with 76 points while scoring 111 of their own. Washington struck quickly by jumping out to a 27-14 lead in the first quarter and never really looked back from there. Marcin Gortat had a monster game, he notched 20 points and a pair of blocks in 29 minutes of action. Kevin Seraphin was the one to steal the show however. In 19 minutes of play Seraphin scored 14 points with 9 rebounds and continued to impress off the bench. At on point, he dunked the BEEJEZUS out of the ball on the entire Sixers squad. Due to the lop-sided score even Garrett Temple got in on the action, scoring 8 points and hitting two three-pointers to boot. Nothing raises morale like a blowout win. Read the game story here. 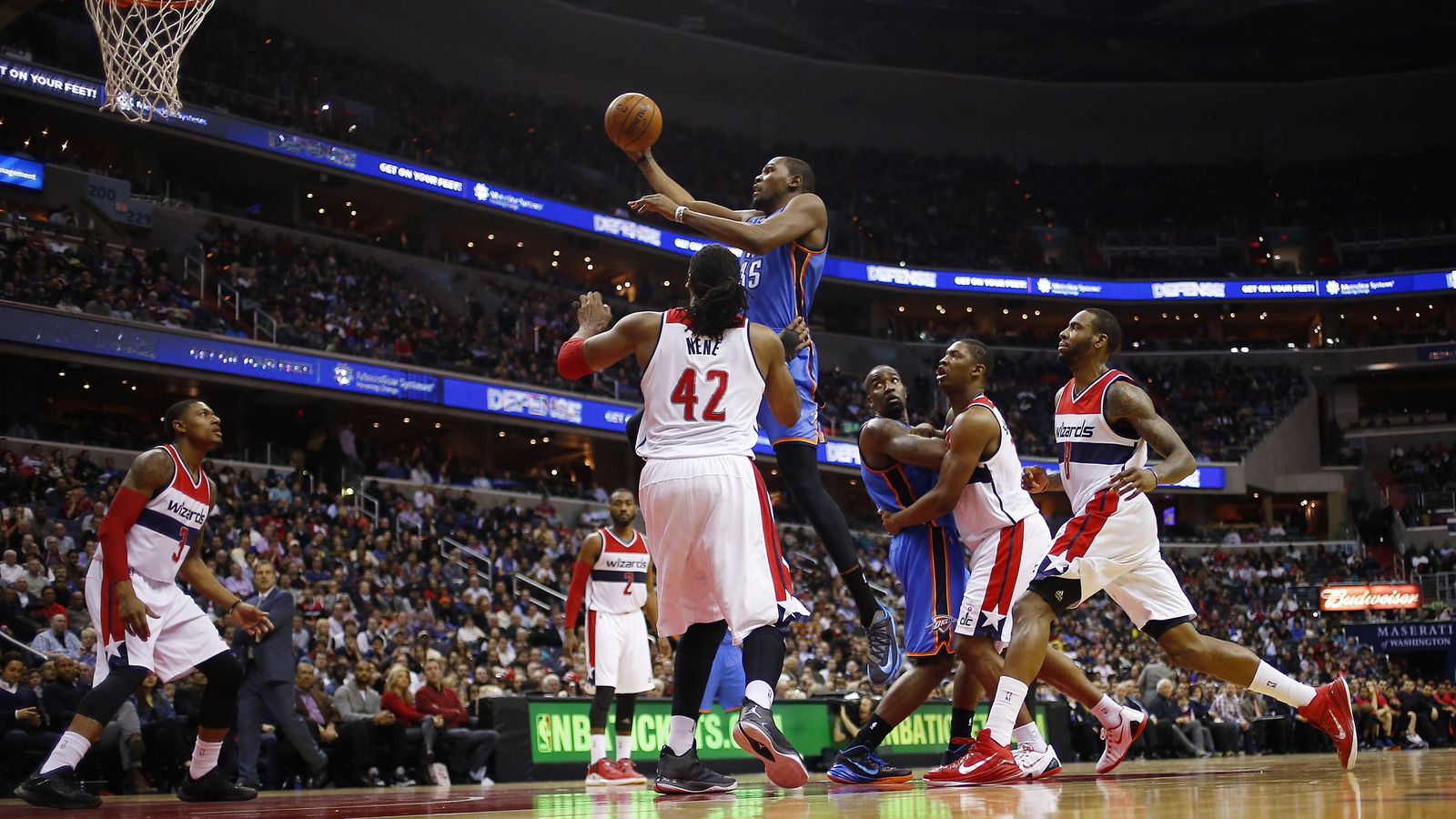 Wednesday night put the Wizards in a completely different scenario. They had the prime-time ESPN game against the playoff desperate OKC Thunder. Unless you live under a rock, you might have heard that Kevin Durant came into town as well. The Wizards played a competitive game, but due to a head-scratching defensive lapse in the waning seconds of overtime were not able to win the #KD2DC bowl. Durant and Westbrook combined for 66 points and reminded the league that when they're both healthy, OKC is one of the league's best. John Wall had a phenomenal game as well with 18 points, 13 assists, 4 steals, and 6 rebounds. While a W on national TV against your most sought after recruit would have been nice, the Wizards have nothing to be ashamed of from this game. Read the game story here. 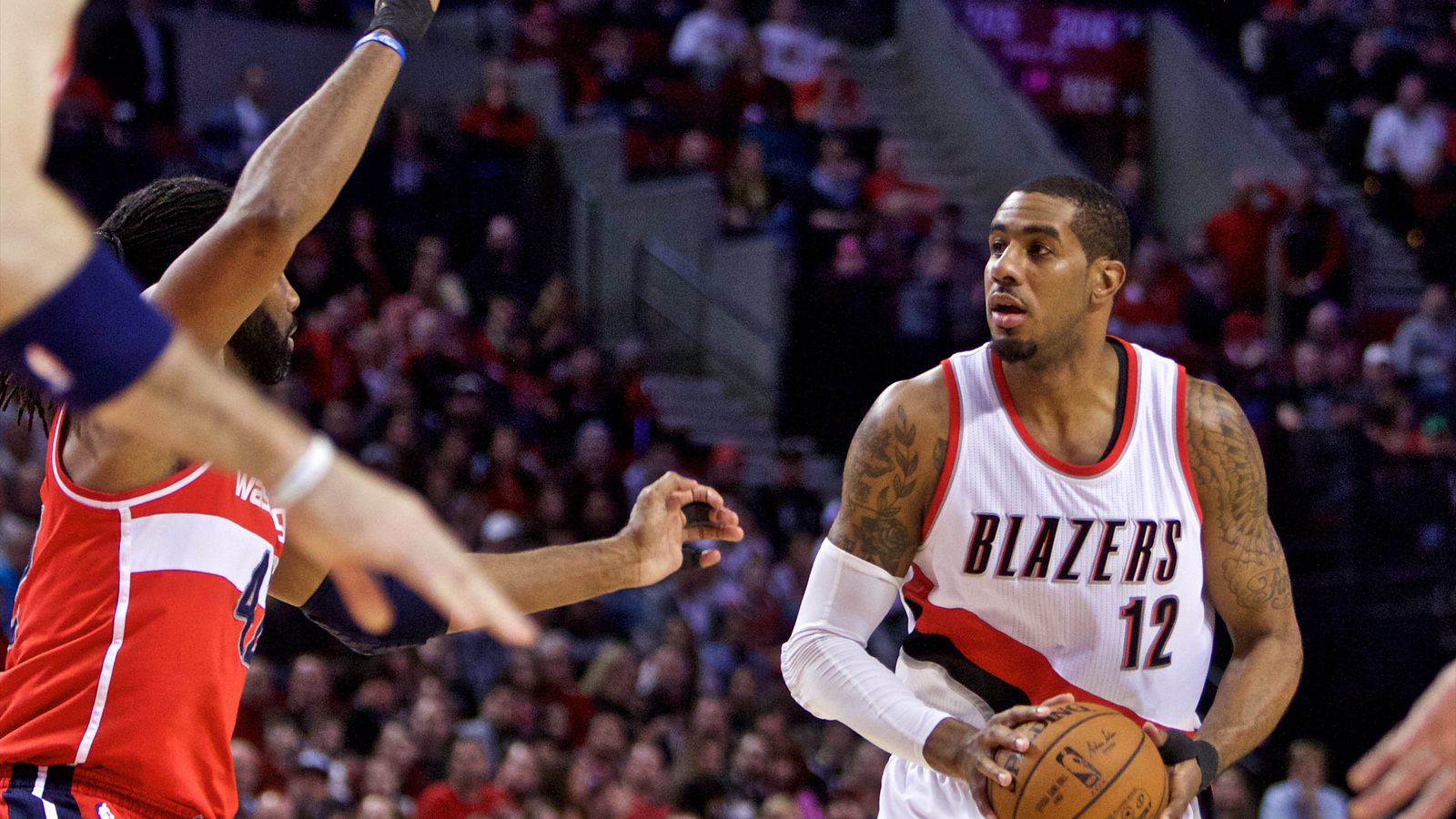 Last night the Wizards lost a close one against the Portland Trailblazers, despite having the lead late. The Wizards struggled to make stops down the stretch, with a foul by Marcin Gortat on Lamarcus Aldridge proving to be especially costly. Aldridge surprised everyone by making a game-time decision to play despite needing surgery on his left thumb. If his thumb was bothering him you couldn't tell as he scored 20 points while playing more than anyone else on the Blazers. John Wall and Paul Pierce led the way for the Wizards with 25 and 19 points respectively. Wall also kept things interesting late with some clutch free throws and drives to the basket, but without defensive stops the game was already out of reach. It's a shame Washington couldn't pull this win out, as this is only the 4th time the Wizards have lost back-to-back games this season. Read the recap here.

The Wizards will spend a majority of the upcoming week away from the Verizon Center, although they aren't facing the most quality of competition. However two of the four games will be on national television, which will raise the stakes despite not playing high profile teams.

For tonight's game the Wiz will be traveling to Denver to take on the Nuggets on NBATV. Denver has struggled mightily as of late, mired in a 5-game losing streak and reeling from Ty Lawson being arrested for suspicion of DUI. Unfortunately for them, their season is all but lost at this point. The Wizards cannot let their guard down against any Western Conference opponent, but without Ty Lawson I don't see Denver being very competitive.

After a day off the Wizards will play the Kobe-less Lakers on Tuesday night at 10:30. Kobe Bryant will likely miss the rest of the season with a torn rotator cuff that he suffered during Wednesday's loss to the Pelicans. Without Kobe, this team is in the hands of this man:

While some may argue that the Lakers are actually better without Kobe, even at their best the Lakers have been playing uninspired basketball this season. This should be another easy win for the Wizards.

After (hopefully) dispatching the Lakers, Washington will head straight to Phoenix for the second game of a back-to-back. The game will be broadcast on ESPN (the 4th ESPN broadcast in a month) starting at 10:30. The Suns have picked up steam at just the right time, and kept a firm grasp on the 8 seed while holding Oklahoma City at bay. They are currently 7-3 in their last ten games and gaining ground on San Antonio and the rest of the West. This is a desperate team and they will give the Wizards all they can handle. Washington always seems to play well on national television and hopefully will continue the trend here.

The Wizards will close out the week at home against the Toronto Raptors. Despite starting out as an early favorite to win the East, the Raptors have been slumping recently. A 4-6 record in their last ten, they even needed a heroic effort by Kyle Lowry to get them past the lowly 76ers on Friday. It's tough to say where the Raptors will be mentally when to come to the Phone Booth on Saturday. They will be on the second game of a back-to-back having faced Brooklyn the night before, so the Wizards may catch a fatigued Raptors squad. That's fortunate for the Wiz because the Raptors are still very much in the hunt for Washington's #2 seed in the East at only a game back.

In Case You Missed It: 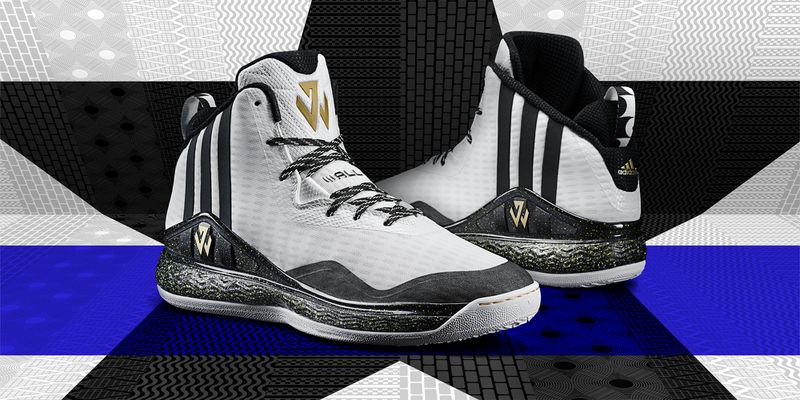 Kevin Durant walking off the court at the Verizon Center.

It looks like the Chinese Basketball Association is just the right pace for Andray Blatche.

We're still not sure what was going on here. Kevin Seraphin's twitter is a bizarre place.

This comes from the Wizards vs. Blazers recap from last night:

While I don't agree on all of these points, there have definitely been times where I have gotten to this level of frustration with Randy Wittman. I like your conviction LezBoules, but go easy on ol' Randy will ya? He's no Phil Jackson but I think he's coached a fine season. Just my opinion.

This wraps up the first edition of "Sunday Summations". If you have any suggestions or requests, let us know in the comments section! This weekly column is for you guys, I'm here to serve.