As we reach the halfway point in the season, we take a look at which players are doing well, and which ones are struggling.

This time last season Washington was 19-20 (coming off of a loss to Detroit in the Wiz's 3rd attempt to get over .500) and considered a pretty big disappointment in an historically weak Eastern Conference. While they obviously turned things around enough to secure the 5-seed, most would agree that a 44-38 record (12 games back from the first place Pacers) in the East last season wasn't exactly a huge accomplishment either. The Wizards would need to make significant improvements in order to be considered a contender. On paper, the Wizards had a solid off-season. Shoring up the bench with big men and replacing a huge hole left by Trevor Ariza with future hall of famer Paul Pierce were all good moves, but not really moves that make you ready for a championship run. Washington seemed poised for a 4 or 5 seed and probably a second round exit this season. At the very best, they might have gotten an Eastern Conference Final berth if they could avoid facing the Cavaliers early.

Flash forward to present day, the Wizards are in the midst of one of their strongest seasons in the history of the franchise. They currently have a 28-13 record and are the 2-seed in the top-heavy Eastern Conference (with no Cleveland in sight!). There's no doubt this Wizards squad is much stronger this season than last. But what changed? This is a roster with 4 of their 5 starters back from last season, and the same ol' mid-range jump-shot-lovin' Randy Wittman at the helm. Where did these extra nine wins come from? Well, they came from certain players giving this team an added bonus where we might not have expected it. Let's look at the top three Wizards players who have exceeded our expectations this season. 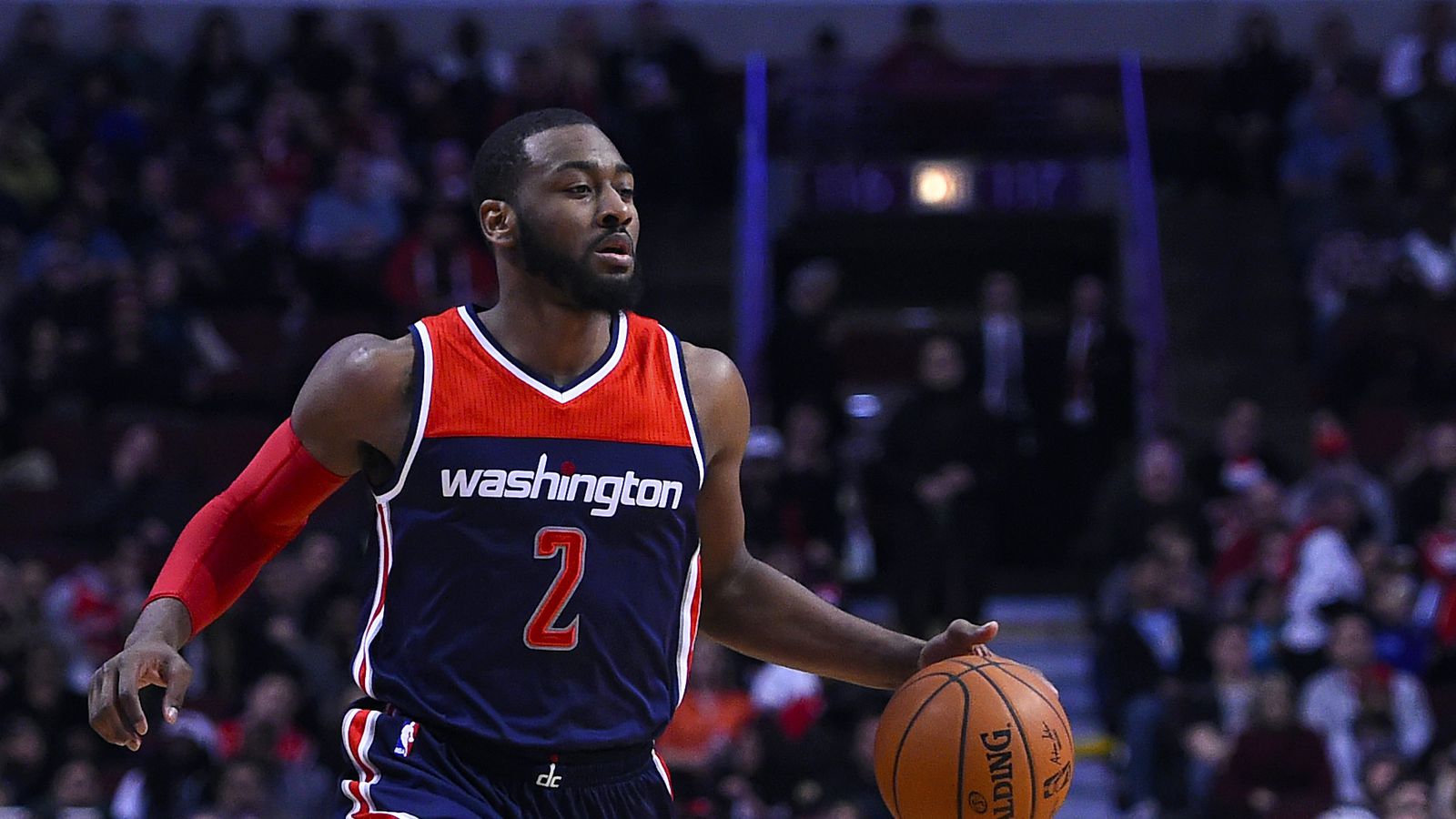 Depending on who you talk to, John Wall's career year actually isn't that big of a surprise. He finally has a winning team surrounding him. Full of experienced veterans mentoring him and a sprinkle of young talent who he can depend on, this Wizards squad is one John Wall can functionally grow in. The most noticeable upticks in his production come in the steals and assist categories: John is #2 in the league in assists (10.0) per game and #3 in steals (2.07). These numbers, combined with his solid play during the Wizards nationally televised games, have raised his national profile. In turn, fans currently have him second to only Lebron in the All-Star voting. Even John Feinstein has to admit that John Wall has turned in an impressive season thus far.

So while many Wizards fans might not be surprised that Wall is finally being recognized as a superstar in this league, aren't we a little surprised at how fast it happened? Last season was the first time anyone really began paying attention to his ascension. John Wall's name now comes up in serious conversations about the best point guard in the league, and is even considered a potential MVP candidate. John has become the unquestionable leader of this squad, a squad that has very real potential to reach the Finals this year. At this point, JW could take us anywhere and I wouldn't be surprised. 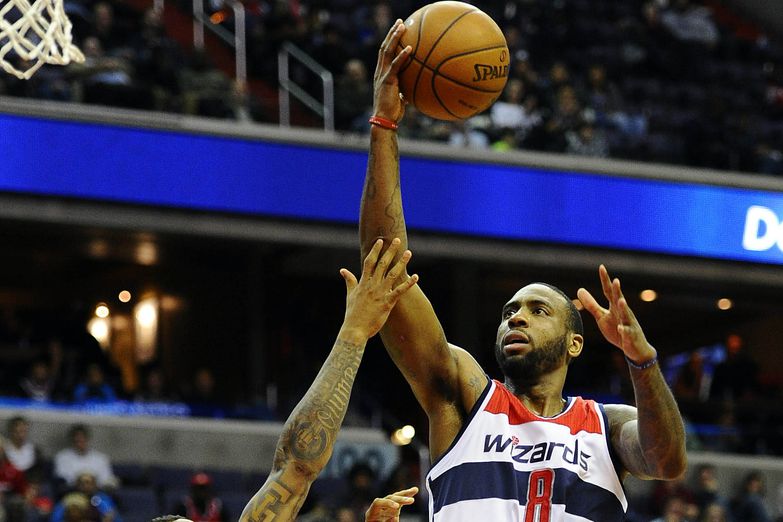 This is the most obvious player to point out on the Wizards, as we really had no expectations for Rasual at the start of the season. The 12-year veteran was a long shot to even make the team, playing behind the likes of Xavier Silas, John Lucas, and Damion James in the preseason. But Rasual Butler edged them out in what was considered an unexpected move, considering our then desire to have another guard on the team. He was thought to be a bench warmer or a filler of minutes in garbage time, anything after that would be considered a bonus. Now, Butler has made Ernie Grunfeld look like a genius. With 47% accuracy from deep Rasual Butler is third in the league in 3P%, behind only Courtney Lee and Kyle Korver (who is having one of the greatest shooting seasons of all time). His production has even usurped Otto Porter as the first SF off the bench.

Butler is currently playing a quality 22.5 minutes per game and is a steal for the price we're paying for him. Rasual just locked up a guaranteed contract with the Wizards worth the veteran minimum of 1.4 million dollars for the rest of the season. He's worth every penny, and probably quite a bit more. The day will come where Butler comes back down to Earth. After all, he's 35 and shooting at an unsustainable rate. We just have to hope that doesn't come before the postseason. For now, let's enjoy the ride. 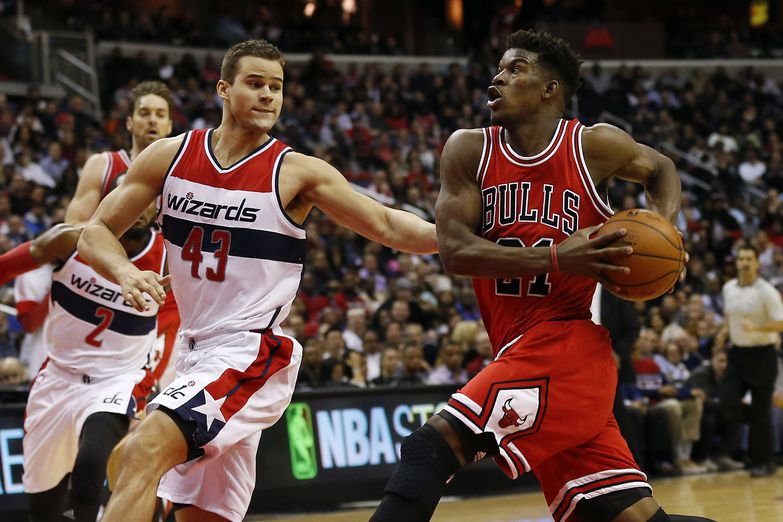 Kris Humphries had a slow start in Washington. Wittman seemed to prefer Drew Gooden early in the season. Fortunately for Kris, his hustle on both ends of the court was rewarded by starting in Nene's place during his bout with plantar fasciitis. Humph started 15 games, and was trusted enough to start even after Nene had returned to limit the big Brazilian's minutes. Over this stretch, Humphries averaged 8.2 points and 7.3 rebounds per game (including one beauty where he notched 20 rebounds against the Lakers.) His ability to step in during this time was huge and the Wizards managed to go 10-5 while missing their second highest-paid player.

Humphries is no longer starting, but he's still hustling off the bench and providing quality minutes. He cannot finish at the rim nearly as well as Nene, but he can provide the same offensive spacing with a fairly potent mid-range jumper. He shoots 47% from mid-range, while Nene shoots only 42%. He is also a stronger rebounder than Nene, which is a trade off for the decreased production offensively. Kris has a firm grasp on the backup PF position, and isn't going to let go anytime soon.

Unfortunately, there is another side to this coin. The team as a whole has impressed, but there are still a few players who have not lived up to expectations. The good news is that outside of the following three players, the rest of the team has played solidly. I'm sure plenty of other teams in the league would love to have this problem. 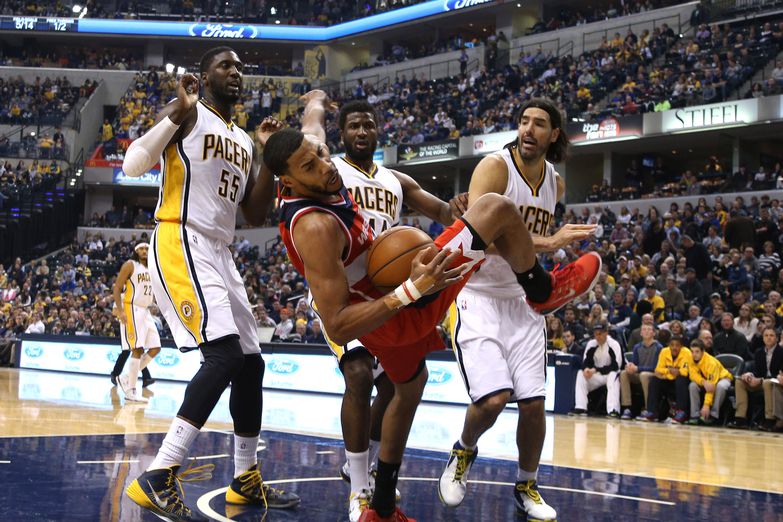 This one might not be totally fair. Garrett Temple began the season starting at the two spot and I don't think anyone expected much of him. He took the starting position and ran with it, shooting 52% from 3 pt. range and scoring 13.8 PPG for the first 5 games of the season. At Bullets Forever, we hailed him as the new Trevor Ariza. THE HYPE WAS REAL!

Unfortunately, it soon became evident that Garrett Temple's production was just a mirage. He would start another 8 games for the Wizards, but his numbers absolutely plummeted. Temple abruptly began shooting 12% from three and only scored 2.6 PPG. Temple's shots started looking a lot more like this:

Since Temple has been placed back on the bench, he has reverted back to his old role of a situation player. It's somewhat sad to see, as Temple seems like a genuinely great human being. Hopefully he'll get another shot to prove himself with us or another team. 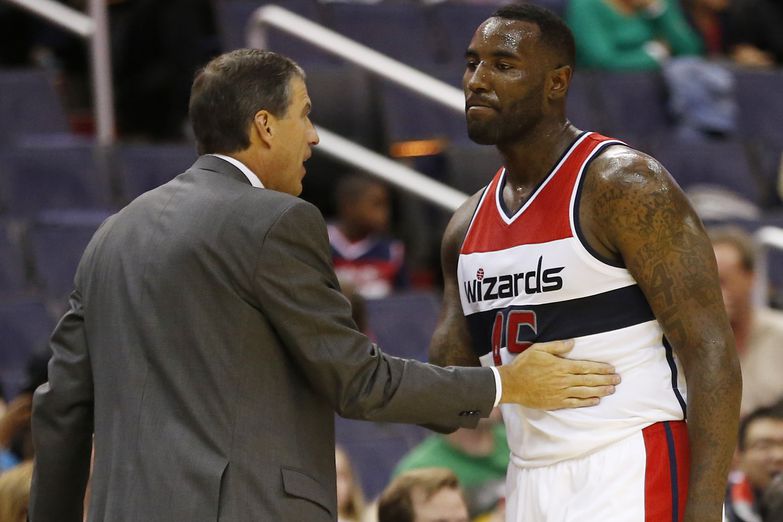 Dejuan Blair came to the Wizards this past off season as yet another competent big man to solidify the bench. He had just finished up a season with the Dallas Mavericks, who had played San Antonio tough in a 7 game series in the first round of the post season. Blair played 13.5 minutes a game in that series and held his own. He seemed like a good fit for Washington and it was assumed he would get a chance to carve out some minutes in Wittman's rotation. For whatever reason, Blair has never really gotten that chance. Blair has only played more than 5 minutes three times in the entire season (each one was a blowout loss), and has only played about 65 minutes total. It's a shame to see a young player in Dejuan who had been productive in Dallas and San Antonio waste away on the bench for Washington.

There seems to be no animosity between Blair and Wittman. When asked directly why Blair isn't getting more playing time, Wittman simply said "I can't play all of them." Fair enough, Randy. It's great for the Wizards to have such depth with big men, but for Blair it's a tough situation. With no playing time it's awfully difficult to progress in this league and he's on the books for another 2 years after this current season. The bright side of this for Blair is that he could potentially be a valuable trade chip for a future Wizards trade. Other than that, he would need to wait for an injury or prove himself in practice to carve out more time in games. 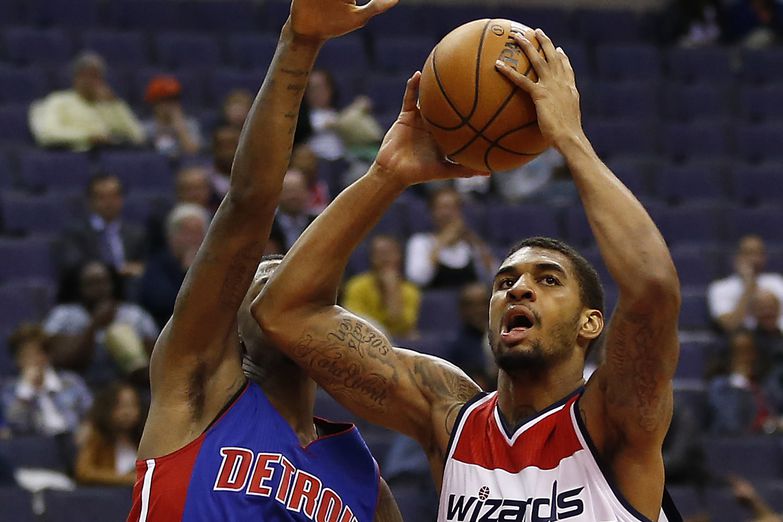 After Glen won the MVP award for the NBA Summer League, expectations were high for the second year man. GRJR was primed to be the backup shooting guard behind Garrett Temple and eventually Bradley Beal. He got most of his run during the same 5-game stretch at the beginning of the season where Temple shined. Unfortunately, Rice had the exact opposite trajectory as Garrett Temple during this stretch. Rice shot 1/7 from long range and only scored 11 total points in about 40 minutes of game time. Then during the blowout loss to the Toronto Raptors on November 7th, Glen Rice Jr. seemed to get into a disagreement with Coach Wittman. (Coincidentally, this was the game Temple began his fall from grace as well). Glen Rice Jr. would never enter another game for the Wizards.

Two weeks after the incident with Wittman, Rice was sent to play for the Fort Wayne Mad Ants in the D-league. On January 7th, the Wizards waived Glen Rice Jr., who was then picked up to play for the Rio Grande Valley Vipers back in the D-league. Glen did himself no favors fighting with Randy Wittman, but it is still a shame to see such potential wasted. Hopefully, he will be able to redeem himself elsewhere. For now, let's just remember the good times.