How John Wall can shake the long two habit

The Wizards' point guard shoots too many jumpers, but how does he go about improving that problem?

Share All sharing options for: How John Wall can shake the long two habit

This is our second Summer Checklist piece where we break down an area of weakness each player on the roster can improve. Previously: why Bradley Beal needs to step it up defensively.

Let's start with a statement: John Wall needs to chill a bit on long two-pointers.

You've heard a variation of this line from so many writers without the necessary context to explain it. There are reasons Wall takes a lot of these shots despite not being great at making them, and it's more logical than "Wall's being stupid." Every action has a reaction, every change has unintended consequences. We've been over this.

Still, the facts are the facts. Wall shoots poorly on long two-pointers, yet takes a ton of them despite his speed. Thus, the biggest jump Wall can make is in being more selective with those shot attempts.

But how? Let us explain. 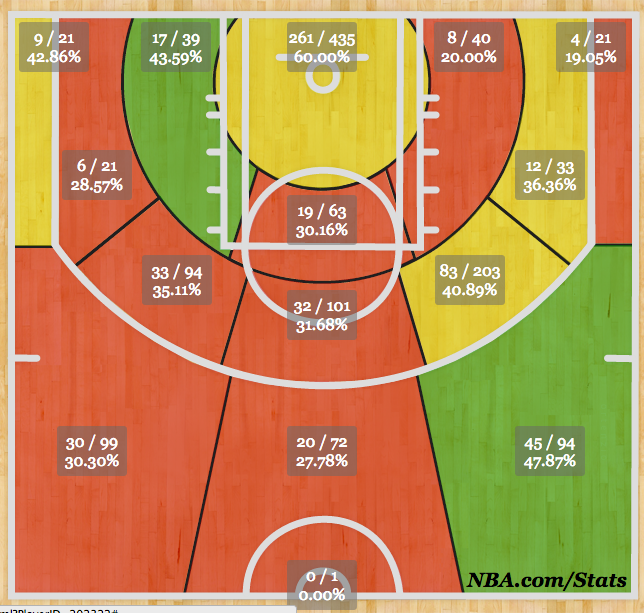 That's an improvement in some respects, but there's still a ton of red and some very large numbers in the mid-range area. Many of those attempts happen for valid reasons -- keeping sagging defenses honest, becoming a perimeter threat to open up driving lanes, avoiding shot-clock violations -- but that's still too many attempts. A Wall jumper comes in place of a Wall drive or one of Wall's patented crosscourt whip passes to the corner. Sometimes, those aren't available, but sometimes, they are or have the potential to be if Wall made a better decision.

"That shot's going to be there every time for me, so I don't have to take it every time [it's there] and I definitely don't need to take it early in the shot clock. If I can get the ball back later in the shot clock and there are like 14 or 12 seconds left, I can take it then," Wall said. "But [it's better] to just move the ball and get some flow into our offense."

I spent a couple hours on Synergy and logged Wall taking 271 two-point jump shots out of the pick and roll from Nov. 20 (the day after he said that quote) to the end of the playoffs. Of those 271, a whopping 72 percent came in the first half of the shot clock. Some of those were opportunistic attempts. Some of those were with horrific spacing, like this.

But others were rushed decisions with other options available. Note this play, for example.

Or this one, which was one of the few times Wall pulled up in the final half of the shot clock.

Or this one, when Wall broke the Wizards' patented Hawk set to shot a contested 17-footer.

Wall pulls up far too often in these situations. Worse, he's so often looking for his jumper that he misses more obvious attempts to drive. Wall takes a big step into his jumper, the kind of one-two arrangement that some feel takes too long against fast NBA defenders. He's essentially taking the space the defense gives him and stepping into it so far that the defense is able to close. In the process, he has to regather himself to drive, which means opportunities like these are missed:

As Wall came off the screen, he took a large step to set up for his jumper rather than a smaller step to commit to a drive. He essentially telegraphed his intentions. And because of that, Nikola Pekovic hangs way back, knowing that Wall won't come to him to open the pass to the roll man even though he should.

Wall has another annoying habit that I'd like to see him fix. Rather than going off ball screens in a straight line, he sometimes circles out before making a decision. That allows the defense to recover and forces him to pull up instead of actually getting to the tin. Here's the best example I can find.

If Wall cuts through that Gortat screen in a straight (or at least a straighter) line, maybe he gets into the lane, collapses the defense and finds the open man. Instead, he goes backwards and bananas into the move, which only helps him step into a long two-point jumper that misses. When you do things like that, you limit your options. A player really trying to break down the defense doesn't take that indirect a route around a screen.

We've constantly stressed that Wall's long-two habit is a symptom, not the problem. Lots of factors play into the symptom, including team dynamics, coaching and game situation. But so do Wall's own habits, which can always be improved to ensure his rise to stardom continues.