The Professor has shown that he can take care of the ball and make the right passes, but as he ages, he should be more willing to do something he hasn't done much in his career.

Andre Miller is at the twilight of his long NBA career. However, he has remained an effective ball handler, passer, and even a sometimes-solid scorer. However, Miller took the vast majority of his shots at the rim, where his shooting percentage has been declining. In order to keep defenses honest, can Miller be a more reliable shooter from midrange and from three?

It's not really in his nature, but perhaps he should be open to it.

Miller's shooting is declining from close to mid-range, but improving from the perimeter

However, once you look at Miller's shot performance chart, it does not paint as bright of a picture with his shooting at the basket: 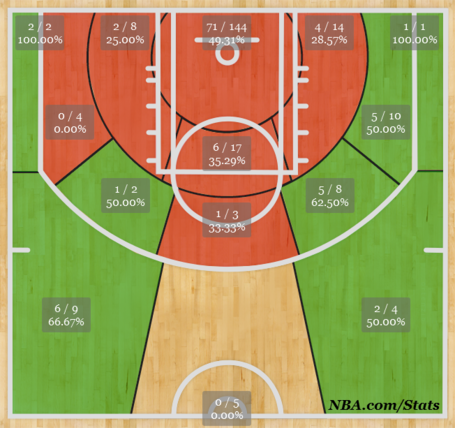 Miller's field goal percentage came primarily from shots at the basket. However, he also made his shots at a rate of 49.31 percent, below the league average. As a point of reference, Wall made 60 percent of his shots (261-of-435 attempts) at the basket.

There is something encouraging from this chart however: Miller made many of his perimeter shots and three pointers at an above average rate.

This got me a bit curious. How was Miller's shooting in previous seasons? Here are his shot performance numbers based on distance from NBA Stats from the 2009-10 through 2013-14 seasons:

From looking at this, I'm seeing a few trends. First, Miller's shooting from 10 feet and below has dropped gradually over the last five seasons, and it has actually dropped quite drastically from 10-14 feet from 48.15% in 2009-10 to below 38% in each of the last two seasons. At the same time however, his shooting from further away, including from the three point line has improved over the last five seasons, especially from the last two seasons.

Miller's shooting more near the basket, but less from the perimeter

Here is Miller's shot distribution chart from the 2013-14 season: 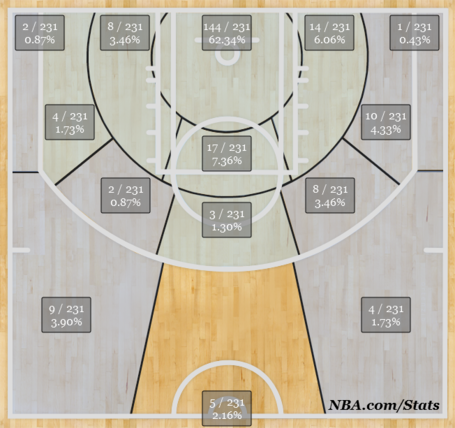 Miller is taking the majority of his shots at the basket, but let's see how his shot distribution was over the last five seasons:

This shows a puzzling trend. Miller has been taking a higher proportion of shots close to the basket and up to 14 feet away, where his performance has been declining. Yet he's also taking less shots from 15 or more feet away, where his shooting percentages have gone up over the years. This is most notable with Miller's shooting from 15-19 feet away where he took nearly 25 percent of his shots in 2009-10, but not quite 11 percent of his shots in 2013-14. Still, his percentages have actually improved from that range over that time.

Miller should take more perimeter shots when he is open

I also looked at every one of Miller's threes from the 2013-14 season, both from his time with the Nuggets and the Wizards. For the entire season, Miller made 11-of-21, or 52.4 percent of his threes, which is a career high for efficiency. While 21 shots is a tiny sample size, it also shows that Miller was wide open when taking his three pointers. Below are just some examples, which were all from his time in Denver.

On November 5, Miller made both of his three point shots against the San Antonio Spurs. First was an open look he had from the left key: 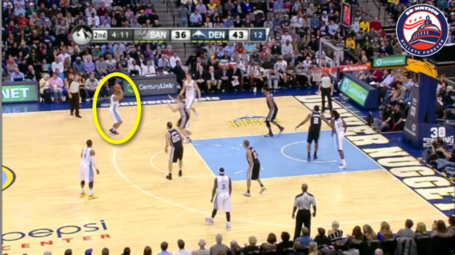 His second three-pointer was from the left corner after Ty Lawson drew the defense while driving to the basket, which is not unlike many of Wall's passes that turned into corner threes: 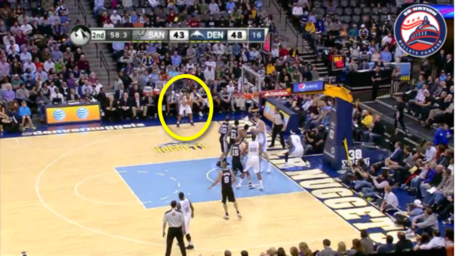 On Dec. 1, Miller made another corner three, this one from the right side against the Toronto Raptors after Nate Robinson drew the defense. 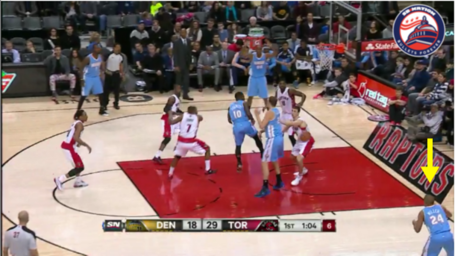 Miller made all these shots in the flow of of the offense. None of these shots were desperation attempts to avoid a shot clock violation.

Speaking about avoiding shot clock violations, here's another wide open look Miller had when playing against the Wizards on Dec. 8. He did not make this shot, but Washington's defense did not consider him a threat: 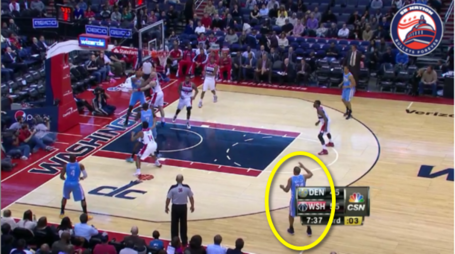 It's clear defenses aren't respecting Miller as a shooter. There were times when Miller made them pay when he had open looks and was able to get into a set shot.

Though the Professor did not take many threes throughout his career, his shooting efficiency from deep improved even before he was traded. Thus, why not fire away a bit more often this season?