The Wizards finally signed the player many wanted them to take in the 2009 draft, but how will DeJuan Blair fit into the rotation?

Share All sharing options for: DeJuan Blair: No Wes Unseld, but still useful

The second round of the 2009 draft found the Wizards in a familiar position: having traded their first-round pick for a veteran, they had an opportunity to use their pick to acquire cheap talent. DeJuan Blair, a tough, elite rebounding forward projected to go in the first round, fell to a Wizards team that desperately needed the qualities he possessed. Instead, the organization decided to go in a now-familiar direction, selling the pick for cash considerations.

Five years later, another Wizards squad had a chance to grab Blair. This time, Ernie Grunfeld went for it. And for the privilege, Blair will provide a tough, offensive rebounding force who will captivate Wizards fans with his hustle and attitude coming off the bench despite his limitations as a defender and shooter.

As an undersized interior player with limited athleticism and shooting ability, Blair has had to prove he could hold his own against bigger, more athletic players. Suffering through knee problems in high school, Blair still managed to lead Schenley High School to become the first Pittsburgh City League team to win the AAAA (big school) state title since 1978. He found success down the road at the University of Pittsburgh, becoming one of the best rebounders in the country while earning first team All-American honors. Blair excelled using his strength against taller competition, as when he bested Big East Player of the Year Hasheem Thabeet and No. 1 Connecticut by scoring with 23 rebounds while delivering this brutal takedown.

During his first two seasons, Blair started for the San Antonio Spurs before gradually falling out of favor with Gregg Popovich. Blair signed with the Dallas Mavericks last season for the league minimum and had a resurgence coming off the bench. Nowhere was this more evident than the in playoff series against his old team, during which he provided huge production in limited playing time, including two double doubles and a clutch steal on Tony Parker to help secure a Mavs victory in Game 6.

Most of Blair's scoring comes around the basket. He serves well as the roll man on the pick and roll, moving with surprisingly fluidity for a player of his size. His considerable bulk and strength enable him to set solid screens and create space under the basket. These attributes also serve him well on the offensive glass, where he is among the best in the NBA. In 2010-11, he led the league in offensive rebounding percentage. Last year, he ranked 10th among players who had played at least 800 minutes.

Nonetheless, Blair's smaller stature and limited leaping ability hurt him when he tries to score near the basket against taller players, as demonstrated here against Atlanta's Al Horford.

In 2013-14, Blair had his shot blocked 46 times on 393 attempts (11.7 percent), far above the league average of 5.6 percent. In response, he has developed a floater that allows him to shoot over the outstretched arms of taller defenders.

Another drawback to Blair's game is that he offers little that will stretch the floor. In 2014, Blair took a mere 23 shots from outside the paint, connecting on only six of them. Unless he suddenly develops a 15-foot jumper, his shooting will do little to provide spacing for the Wizards. 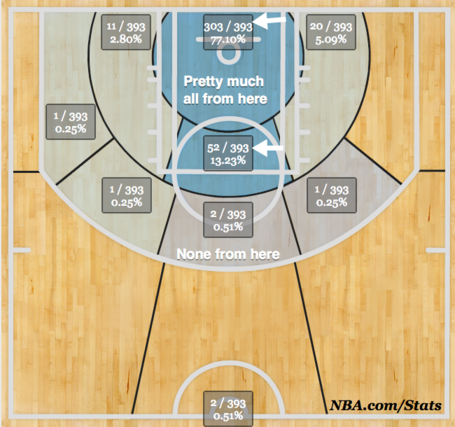 Blair also struggles with some facets of defense. His height and limited leaping ability make him an inadequate rim protector, as opponents made 55 percent of their shots at the rim against him last season. His 0.6 blocks per 36 minutes is similar to other inferior rim protectors like Tristan Thompson and Greg Monroe. Blair doesn't have the quickness to guard forwards who pull him out to the perimeter, which also hurts him in the pick and roll.

However, Blair does excel at using his long arms and quick hands to disrupt the opposing team's offense. His 1.8 steals per 36 minutes was one of the best among big men and was at a level similar to quick guards like Eric Bledsoe and John Wall. In this year's playoffs alone, he managed 12 steals in just 81 minutes.

Nonetheless, due to his size and lack of athleticism, Blair will never be a strong overall defender. In his seasons with the Spurs, they allowed more points with him on the court than of; last year, the Mavs' defense was equally bad whether Blair was in the game or not.

Last year, a post on Mavs.com asked a provocative question: "Can Dejuan Blair Be the Another Wes Unseld?" We know that despite some superficial similarities, the answer is an obvious no. Wes Unseld was a rookie of the year, MVP, a Finals MVP, and a stout defensive player. Blair is a nice third or fourth big who brings energy and rebounding off the bench.

Nevertheless, Blair will provide enough nights of great per-minute production that he might help the Wizards win an extra game or two and may become a fan favorite in the process. That may not make him Wes Unseld, but given the Wizards' previous depth problems and his low cost, that's not bad either.