The corners have never been a significant source of offense for Paul Pierce. Will that change playing alongside John Wall this season, or will he buck the trend of elite corner three-point shooters in Washington?

Share All sharing options for: Will Paul Pierce adapt to Washington's corner-centric offense?

This is our fifth Summer Checklist piece where we break down an area of weakness each player on the roster can improve. Previously: Bradley Beal | John Wall | Marcin Gortat | Nene | Otto Porter.

By far the most interesting subplot heading into the season for Washington is their outlook on offense as Paul Pierce and Otto Porter take over on the wings. The Wizards just lost their most frequently-used spot-up shooter to free agency in Trevor Ariza. Right behind him is Martell Webster, who is currently slated to miss at least the first month of the season with a back injury. John Wall has exactly 104 minutes of game experience with his two new wings, which should tell you all you need to know about how the first month of the season might look.

Chemistry is a two-way street in basketball. It was so easy to spot on this team last season because of the roster continuity, but all of that went out the window this July when Ariza departed for Houston. Players may have a good idea of what to expect from Wall -- that he likes the corners and is lightning quick -- but until you experience his speed firsthand, or you're on the receiving end of those passes, you'll likely never going to fully grasp it.

Ariza became so good once he figured all of that out. He always filled his lane on the break and knew exactly what Wall's intentions were in transition. It's almost like they were in sync with one another.

And it wasn't just in transition either. Few players were as instinctive as 2014 Ariza when it comes to drifting into the corners to provide an outlet for a ball handler when he gets into the lane. Watch how he sneaks behind Dwyane Wade and right into Wall's line of sight:

Pierce isn't being brought in to fill Ariza's shoes. He's a different player that brings entirely new things to the table, and that's a good thing. Clearly this style of play last season wasn't enough for an above-average offense. A big part of this season's success will correlate with how well their new additions mesh.

But there has to be some give and take. Wall now isn't confined to just setting players up into the corners, but Pierce has to be more willing to spend time in those sweet spots. Per Nylon Calculus' shot chart from last season, he developed into a above-average shooter from the left corner, but the number of attempts just were't there. 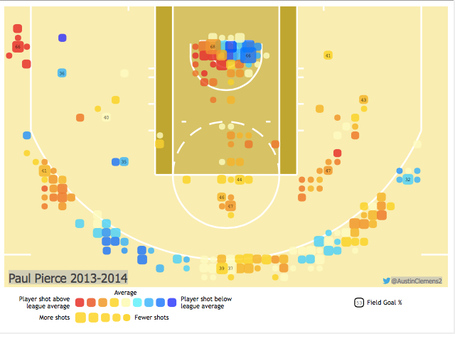 That's where the problem lies. Washington uses those areas of the floor better and more frequently than most teams, and it isn't all by design. A lot of these opportunities are a spur-of-the-moment type thing when plays break down or when Wall is sizing up a defense. Stationing a threatening shooter like Pierce is a necessary evil even if he isn't totally comfortable there. If John gets the help defender on Pierce to bite on the pick and roll, game over. No one throws that skip pass over the top of the defense better and the ball will arrive in the shooter's pocket before the defender can even make his way back.

None of this is to say Pierce has to drastically change his game. Playing a lot of 4 last year meant more time at the top of the key than the corners, and that'll naturally change a little bit. He'll command more attention from the opposition than Ariza ever could and he'll instantly clean up the late-game offense.

But it'll be interesting to see if there is a drop-off in three-point shooting this season and how much of that has to do with losing Ariza and Webster.