The Wizards' second-year forward is being counted on for big minutes this year. To make the most of them, he has to be ready to attack at all times.

Share All sharing options for: Otto Porter's aggression can't have an on/off switch

This is our fifth Summer Checklist piece where we break down an area of weakness each player on the roster can improve. Previously: Bradley Beal | John Wall | Marcin Gortat | Nene.

Everything that could have gone wrong for Otto Porter last year went wrong. From a lackluster summer league performance shortened by a hamstring injury to missing training camp and the beginning of the regular season with a right hip flexor injury, the Georgetown product's rookie campaign stalled before it could ever get into gear. These setbacks, combined with an already-tight roster situation at small forward, a weak second unit and Randy Wittman coaching for his job, gave Otto little chance to get the reps necessary for him to adjust to the NBA game.

The numbers, such as they were, were underwhelming. In 37 games and 319 minutes of play, Porter shot 36 percent from the field and 19 percent from three-point range, averaging just 2.1 points and 1.6 rebounds per game. Besides the numbers, Porter looked hesitant for much of the time he was on the court.

Though this problem seemed to improve as the season went on, the sample size is too small for any big conclusions. Porter rarely saw large chunks of playing time, getting over 10 minutes in just 15 games. Percentage-wise, even Bradley Beal, though he played significantly more minutes per game, didn't fare much better over the first few months of his career, shooting just 35 percent from the floor and 26 percent from three through the end of December 2012. Given that Porter missed critical training camp and preseason time, his struggles are understandable. But they are still struggles.

That means there's plenty for Porter to improve upon as he enters the 2014 season. "Don't get injured," "play more," and "make more shots", are obvious pieces of advice, but here's another suggestion: be more aggressive.

While Porter has the admirable trait of being unselfish, he needs to be more assertive if he's going to succeed on offense in the NBA. The player who at Georgetown had usage rates of 17 percent and 24 percent had a usage rate of just 15.6 percentlast year. Part of this decrease comes from not being the focal point of the offense, but it also arises from his lack of confidence with playing in the Wizards offense

Take this sequence from his first game against the Bucks. John Wall finds Porter in the corner for an open three, but Porter instead passes to Jan Vesely.

Later in the possession, Wall takes a long, contested two with Porter open in the corner. It's entirely possible Wall chose not to pass because he wasn't sure Porter would take the shot.

In this clip against the Utah Jazz, Porter finds himself wide open near the basket with perhaps a path to the hoop or an open shot. Instead, he waits for Wall to get to the corner so he can pass it to him for an open three. It may not have been the worst decision, but that pass would still have been available if he had driven to the basket. 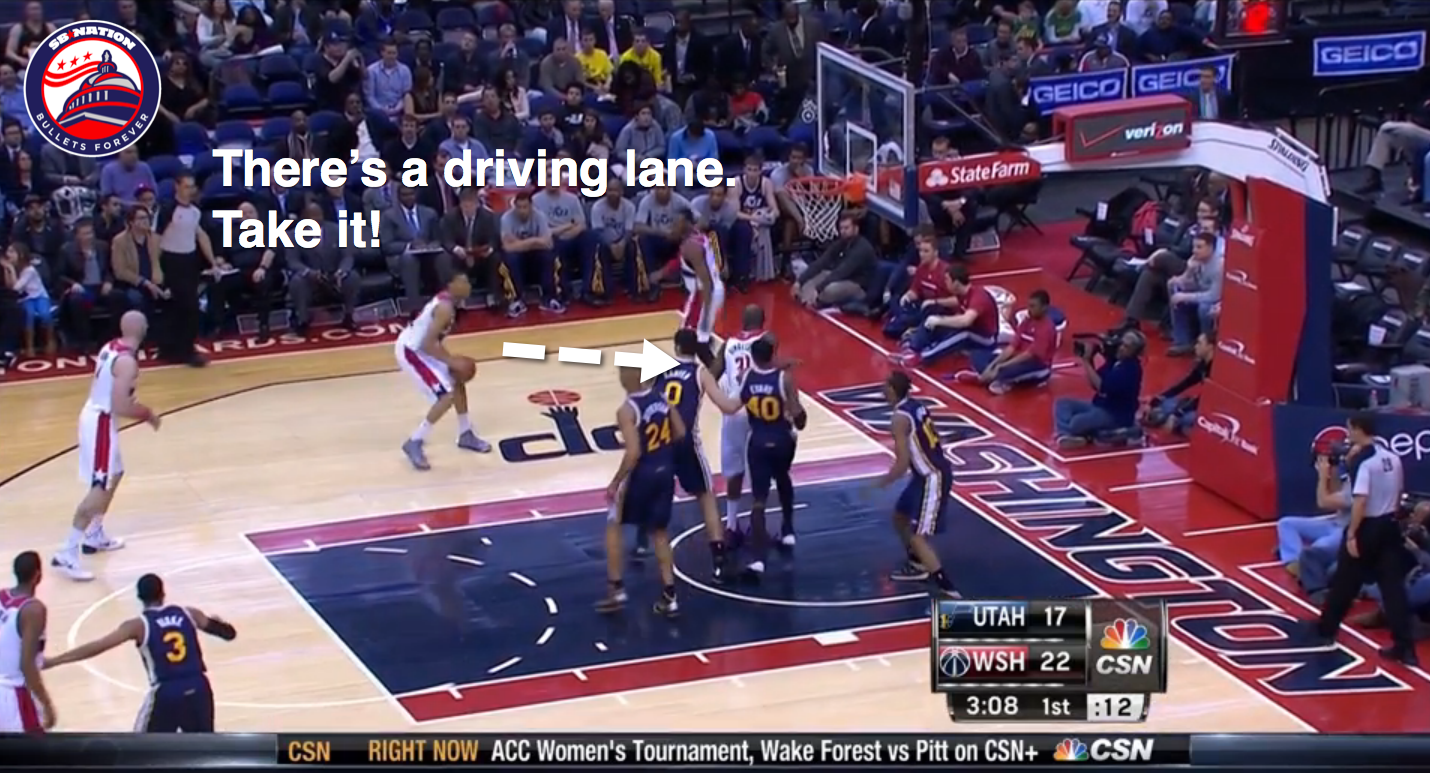 Porter can't operate as if his aggression has an on/off switch. It has to always be there.

Finally, here against the Rockets, he isn't ready to shoot, ultimately passes up an open three and is too slow to dribble toward the top of the key for a turnover. The NBA is too fast to take that much time to make a decision.

The good news: we saw a different Otto Porter in Summer League. He was decisive, confident and able to make plays spotting up, off the dribble and on the pick and roll. Though he won't be the centerpiece he was then, he'll have his opportunities in a second unit that doesn't have an obvious scorer.

Wittman has to put Porter in situations that enable him to use his talents, but it's on Otto to take the shots that are given to him and not force the issue when those shots aren't there. His understanding of the right times to attack and his efficiency when he does will be critical to being a key bench contributor for the Wizards this year.