Wizards set to have new court design for 2014-15 season

According to Zach Lowe of Grantland, you can say goodbye to the 'wizards' wordmark at center court.

Share All sharing options for: Wizards set to have new court design for 2014-15 season

Coming off their best season in decades, the Wizards are making some changes in their aesthetics this season. You've probably already seen that they're unveiling a blue alternate jersey for the upcoming season, the first time the team has had an alternate jersey since making the switch back to the red, white and blue color scheme the Bullets used to wear. Apparently, that won't be the only change we see on the court this season. 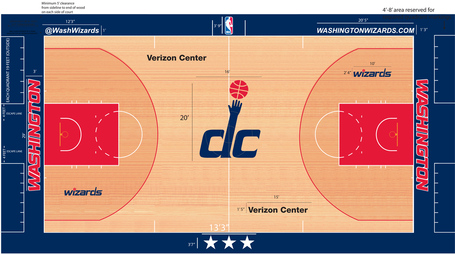 As you can see, the Wizards are reversing several elements of the court for the upcoming season. The color of the baselines have been switched to blue with red 'WASHINGTON' lettering. Also, the 'wizards' wordmark has been moved out to the corners of the court, in place of the 'dc' logo, which will now be occupying the center of the floor.

The other key change is removing the college lanes in the paint, as several NBA teams have done in recent years, leaving the lane completely red. Like Zach Lowe, I'm a bit worried about how the all-red lane will look at the Verizon Center, but it seems to work for the Mystics quite well (though they do have the WNBA wordmark in the paint that helps to break up the red a bit more). All in all, I'd say it represents an upgrade, particularly because the 'dc' logo is now at midcourt.