The NBA Playoffs started in April. The Wizards passed a major test when they were down a man in Game 4 of their first round series against the Bulls.

The Washington Wizards' first round playoff series against the Chicago Bulls was dominant,. In fact, they beat the Bulls at their game: defense. Washington won the series, 4-1, and made a lot of pundits eat crow:

But which game could I pinpoint in that series that was more noteworthy than the rest, and why?

It's easy to point at Game 5 because the Wizards punched a ticket to the second round. However, I'm going with Game 4, which they won, 98-89 at Verizon Center on April 27.

After a 100-97 loss to Chicago in Game 3, at home nonetheless, Nene, was suspended before Game 4 due to getting in a scuffle with Jimmy Butler. Then in Game 4, we saw team owner Ted Leonsis wear a Nene jersey (as you can see above), and fans also had quickly made "Free Nene" T-Shirts:

With Nene out, many believed that Washington would likely lose Game 4 because he proved to be a nightmare mismatch for Joakim Noah. A Game 4 loss would even up the series to two games a piece, and perhaps get the Bulls to be in position to win the entire series against the lesser-experienced Wizards.

Trevor Ariza went bonkers from three, and Washington's defense from the start set the tone on how this game would go.

Instead, the Wizards' team defense was as good as ever, which helped them get to an early 14-0 lead, and it set the tone for the game. Mike Dunleavy, who had a field day in Game 3 with 35 points could only score 6 points in this game. Taj Gibson did score 32 for the Bulls, but he was the only player who was able to provide efficient scoring for them. It wasn't enough when the rest of the team was shooting a combined 35.5% from the floor while committing 16 turnovers, which turned into 29 Wizards points.

Who was the star in Game 4 on the offensive end of the floor? It was Trevor Ariza. who also had his best game in the playoffs, where he scored 30 points and made six three pointers. Here is his shot chart below for the game: 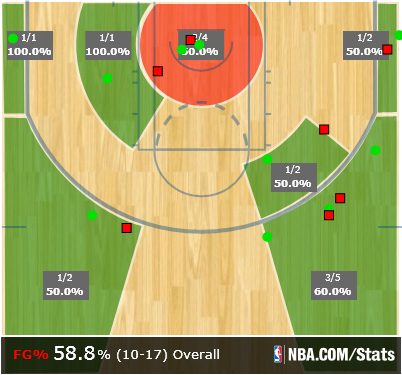 Toward the end of the game once the outcome of the game was not in doubt, we heard the fans yell a chant. The fans let it be known that the Big Brazilian was not forgotten:

Now that we have talked about this game, what makes this game a pivotal moment?

First, this game was a moment where the Wizards were missing one of their most important players in the low post, yet they still won anyway, and in convincing fashion. Second, this game was a rallying moment for the fans in attendance, in particular when the "Free Nene" chants were going on. Seeing Leonsis wear a Nene jersey in support of his suspended player was definitely a classy move indeed.

Last, but not least, this game also happened to be the Wizards' only home win during the NBA Playoffs. Even though the Wizards advanced to the second round and won two games in their series against the Pacers, both of those wins were on the road, not at home. For whatever reason, the Wizards could not take care of games at Verizon Center as well as other teams. That gave them a 22-19 home record in the regular season, worst among all NBA Playoff teams.

Finally, let's get to a what-if scenario here. If the Wizards did lose to the Bulls in Game 4, could they still have won in the first round of the Playoffs? Given how challenged the Bulls were offensively, and how well the Wizards were playing on the road, it wouldn't surprise me to see them win Game 5 anyway. But could they then finally get a home win in Game 6 or clinch a series by only winning the road games? Share your thoughts in the comments below.

To view more pivotal moments from earlier in the Wizards' 2013-14 season by month, click here for our StoryStream.