The John Wall Effect will be tested

The Wizards' point guard is especially good at finding open three-point shooters, but who will emerge as his top targets now that Trevor Ariza is in Houston and Martell Webster is injured?

Share All sharing options for: The John Wall Effect will be tested

In many ways, the 2014-15 season is shaping up to be the biggest test of the John Wall effect.

We coined that term last year to illustrate the idea that the Wizards' point guard inflates the three-point percentages of his surrounding teammates. It's proven over multiple years: Wall has a knack of turning average three-point marksmen into good ones and good ones into great ones.

For whatever reason, Wall loves kicking the ball out to open three-point shooters. Wall pulled off the rare double duty of ranking No. 1 in the league in both corner and wing three-point assists last year. He had 22 more corner assists than the second-ranked player (LeBron James) and accounted for more by himself than the Kings and Bucks did as a team. Overall, Wall had 51 more three-point assists than the second-highest player in the league, a gap wider than the difference between the second-highest (Goran Dragic) and 12th-highest (James Harden) finisher. Nobody in the league is better at sucking defenders to him and finding open shooters. It's his patented assist.

The question for 2014-15: which shooters will be receiving those kick-out passes?

Two of Wall's most frequent targets aren't around, at least not initially. Trevor Ariza was on the end of 165 of Wall's assists last year. He's now in Houston. Martell Webster was the finisher for another 79 of Wall's helpers last season. He's likely to miss time with a back injury. Combined, those two converted 34 percent of Wall's total assists during the regular season.

They also represented the two most natural spot-up shooters on the team, especially from the corners. Ariza took 180 corner threes last season, while Webster took 133. Ultimately, they were the ones who became used to camping in that spot, waiting for Wall to penetrate and being ready for the kickout pass.

Both also became adept at running with Wall in transition, a must because of his speed. Over 11 percent of Wall's assists were for transition threes. Nearly half of those (42 out of 90 to be exact) were to Ariza, and another 15 went to Webster. (The other 33 were mostly to Bradley Beal). Overall, the Wizards made 153 threes on the break last season, hitting them at a proficient 41 percent clip. Webster and Ariza combined to hit 60 percent of those attempts at a combined 43-percent clip. (Stats via Synergy Sports Technology).

That's a lot of numbers that illustrate the same point: Wall benefited from having Ariza and Webster spotting up for his passes. Both were willing to stand in the corner and wait instead of needing to control the ball. Both were willing and able to keep up with Wall on the break. Both ultimately learned to be proficient from the wings as well as the corners.

Now, Wall no longer has them.

Three men primarily stand in their place, and none of them play like Webster and Ariza. Paul Pierce is a good three-point but he hasn't traditionally been the spot-up-in-the-corner-and-wait guy. Here's his shot chart from two years ago, the last time he primarily played small forward. 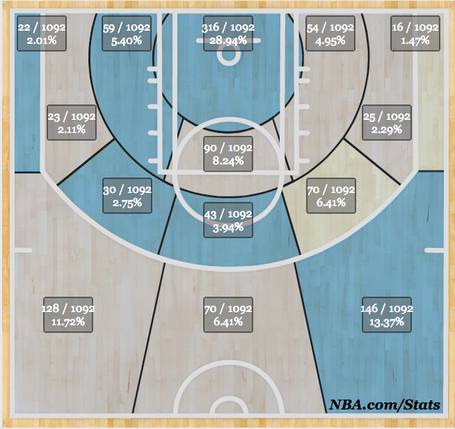 And here's his shot chart from last year, when he played mostly at the 4. 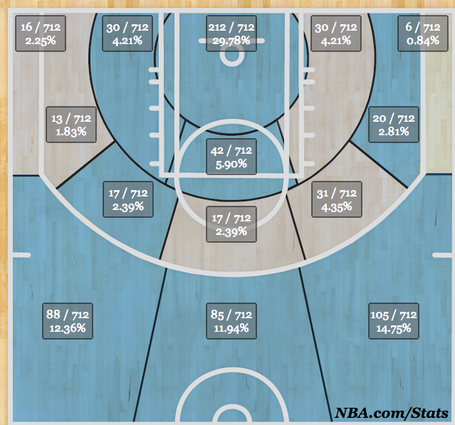 There are very few corner three attempts in there. Instead, Pierce prefers the top of the key, either on pick and pop action or offensive rebounds. This is by design of course: he's not in the corner often because traditionally that's where teams place their offensively-limited players. He's also not nearly the runner Ariza was in transition, though he has always been adept at trailing the break.

Will Pierce's distribution change in a different offense? Perhaps. Doc Rivers' Celtics did not shoot a ton of corner threes, and Pierce was obviously placed out on the floor in Brooklyn because he was playing power forward. Here, he'll surely spend more time in the corners to take advantage of Wall's skills. But Pierce, while certainly willing to adapt slightly to maintain his longevity, has played a certain way for many, many years. It's asking a lot to expect that he'll get his points in a dramatically different manner.

There's also Otto Porter and Glen Rice, who are more likely to change their games to tailor to Wall's strengths. Porter can run with Wall and, at least initially, will be offensively-limited. But Porter also seems most comfortable in the mid-range area, where the Wizards used him during Summer League. We don't have a good read on Porter's three-point range because we've rarely seen it in game action, but it certainly needs to improve to reach Ariza's level last season. Rice offers more potential, especially in transition, but he also fancies himself as a mid-range player to some degree.

On the surface, it certainly appears that many of Wall's best three-point toys have been taken from him in an attempt to improve other parts of the roster. This is one reason why I think the Wizards should use that last roster spot on another wing shooter that more traditionally fits the 3-and-D mold.

Still, Wall and the Wizards have a history of figuring this out. It didn't look like there was enough shooting two years ago, but Webster stayed healthy and Ariza eventually became an elite shooter thanks to Wall and some tinkering from the coaching staff. Wall is going to run a ton of pick and roll with Nene and Marcin Gortat, and in those circumstances, someone will be camped out in the corner. Wall has a history of pulling defenders to him and hitting whoever that is in the right spot. Any player will shoot better on wide open shots.

There are also other schematic ways to free shooters. Pierce's addition means he and Beal can switch positions, with Beal in the corner and Pierce as the secondary ball-handler. That keeps both players in more comfortable spots and provides the added advantage of placing the Wizards' most dangerous remaining shooter in the offense's most dangerous spot. Wizards bigs can also continue to backscreen wing defenders on skip passes like these to open up looks.

Yes, it'll be a test for the John Wall Effect. Yes, the Wizards currently lack a traditional 3-and-D wing. But if history is any indication, the Wizards will figure it out.