Our panel with Christy Winters Scott and Andy Livingston continues. You can read part one here.

On Thursday night, the Washington Mystics will play the Indiana Fever on the road at 7 p.m. in Game 1 of their playoff series. You can watch the game on ESPN2.

Here is part 2 of our Q&A in Christy Winters Scott and Andy Livingston. Here, we talk about the similarities and differences between the Wizards' and Mystics' rebuilds, which younger Mystics players figure to make a big impact in the future, and who is the team's biggest personality.

BF: The Wizards and the Mystics have rebuilt their rosters around youth. The Wizards have done so around John Wall and Bradley Beal thanks to winning three Top-3 picks in a four-year span. The Mystics however haven't been so lucky in the Draft Lottery, like in 2013.

Nevertheless, the Mystics have seven rookies and sophomores on their 2014 roster, most of whom play in the rotation. What similarities and differences have you noticed between the Wizards and Mystics' rebuilds? 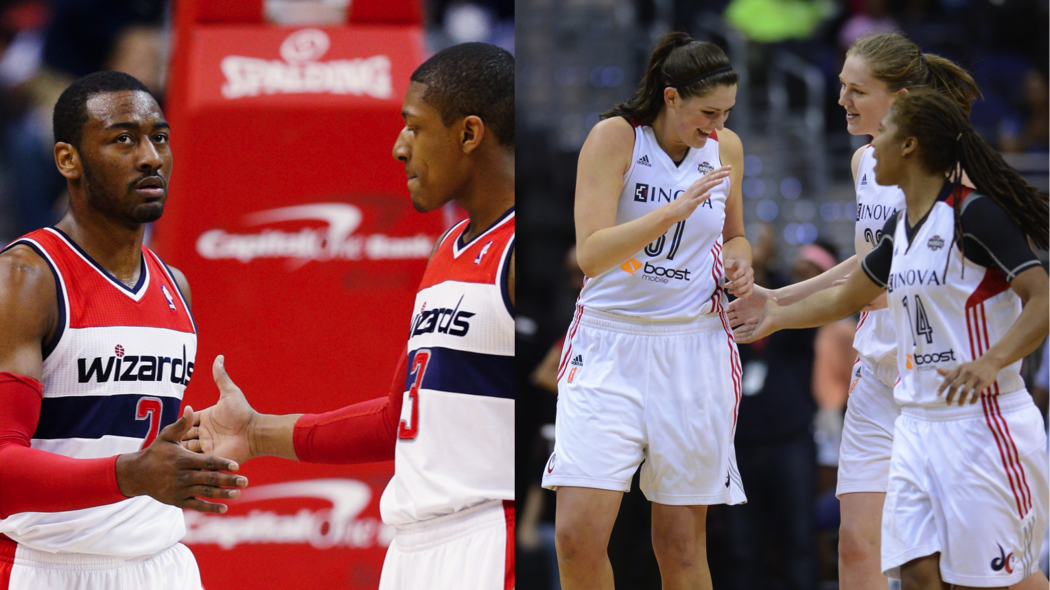 CWS: I think that there are several similarities between the Wizards and Mystics. Even though the "luck of the draw" has been interesting to say the least, the Mystics have been able to manufacture good chemistry between players. Let's discuss the trade of Crystal Langhorne to Seattle for the 7th pick, which brought Bria Hartley and Tianna Hawkins here to DC. Hartley and Dolson have tremendous, championship experience together, and Hawkins returns to her hometown.

Latta and Hartley remind me of Wall and Beal in terms of their fire and passion for the game. Not to mention their will to win. Wall and Latta represented both clubs at the All Star level. Both duos have the clutch gene, and the upside for all four is amazingly exciting to think about. When it comes down to it, the rebuilds for both teams have a great mix of youth and veterans. Paul Pierce and Kara Lawson bring league championship experience into the locker room. Kia Vaughn and Nene bring a strong defensive presence inside. Gortat and Meesseman give you the stretch four with great hands around the rim, and solid rebounding and defense. Overall, these teams mirror one another. Consistent post season appearances will soon be a common occurrence in the most powerful city in the world.

Andy: The difference between the Wizards and Mystics rebuilding is the amount of youth on the roster. The Wizards got two players in John Wall and Bradley Beal that instantly had a change on the floor and in the team culture. While the Mystics haven't gotten a number one game changer the way that the Wizards have, they have lined their roster with so much youth, that they'll have an ability to develop an entire team rather than one section of the lineup.

Albert: To me, the biggest similarity is that both teams have employed a "volume over precision" approach with prospects during the early stages of their rebuilds.  Beyond Wall and Beal, the Wizards have missed the mark when it came to developing other young players who weren't top-3 picks, except maybe Trevor Booker, but he's now in Utah. The Mystics' rebuild is far from over, and we still don't know who their core players will eventually be. But overall, since Mike Thibault arrived, they have developed their rookies and sophomores much more effectively than the Wizards have.

BF: Among the Mystics' rookies and sophomores, which player do you believe has stood out the most among that group so far? How good can she be in her prime? 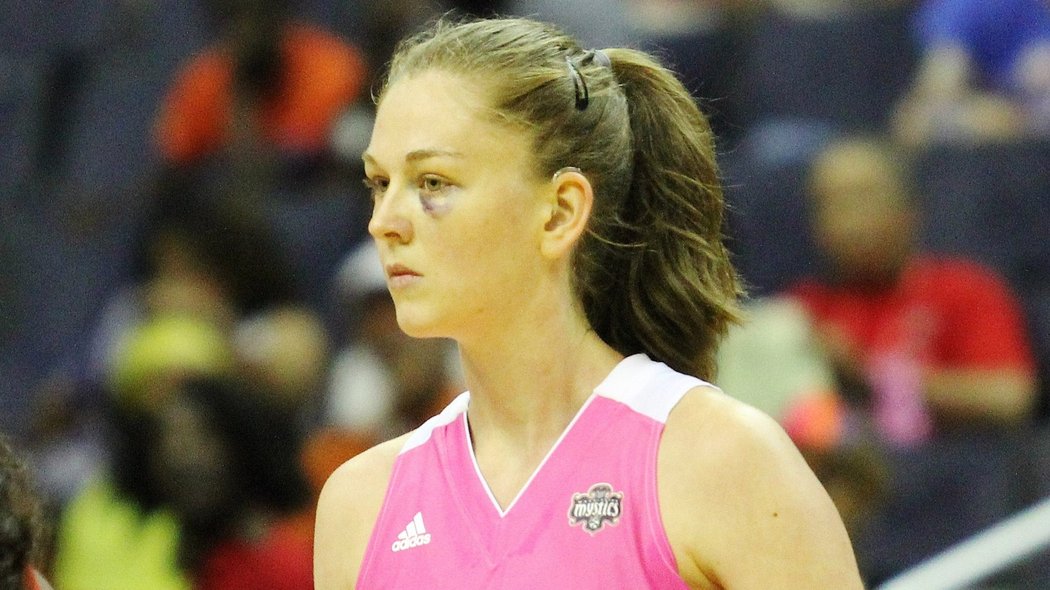 Mystics sophomore forward Emma Meesseman is one player who is standing out among the team's young core - Photo courtesy of Stewart W. Small

CWS: Bria Hartley as a rookie has been fantastic. She has her moments where she may go too fast, physically, or mentally ( with decision making), but outside of that, she has been impressive in terms of her poise and resolve on the court. In her prime, she could be a consistent All-Star. I spoke with Phoenix Mercury point guard Diana Taurasi about her earlier this summer, and she raved about her seamless adjustment to the league. She already has the nick name of "Baby Mamba" on social media. It fits her perfectly!

Emma Meesseman as a sophomore has had an increase in every single statistic this year. If there was a "Most Improved Team", she would most definitely be on it. She has played with a level of confidence that she lacked at times as a 20 year old rookie last season. While she showed flashes of what kind of player that she could be last year, now in her second season has been a more reliable scorer, rebounder, and defender. Not to mention a dead eye passer. Emma and Stefanie Dolson have a strong chemistry with one another that has been somewhat magical to watch this season. With that being said, Emma is only 21 years old, and will continue to add pieces to her game. Next for her will be to extend her shooting range out to the three point line. Total package player after that!

Andy: Emma Meesseman has been my favorite to watch, with her shooting and rebounding holding it down and while her defense has been spotty, her blocks indicate she has good instincts but is still raw. Putting her at the four-spot and pairing her with a more traditional center in Dolson could be the move to push the Mystics to the next level. Once Meesseman gets her bearings in the league and is able to be used effectively, look for her game to turn into Dirk Nowitzki type of performance.

BF: Though the Mystics rely heavily on youth, they still have some key veterans on the team. Starting point guard Ivory Latta is a two-time All-Star and has been a spark for the team since she arrived in 2013. What makes her stand out from the rest of the roster? 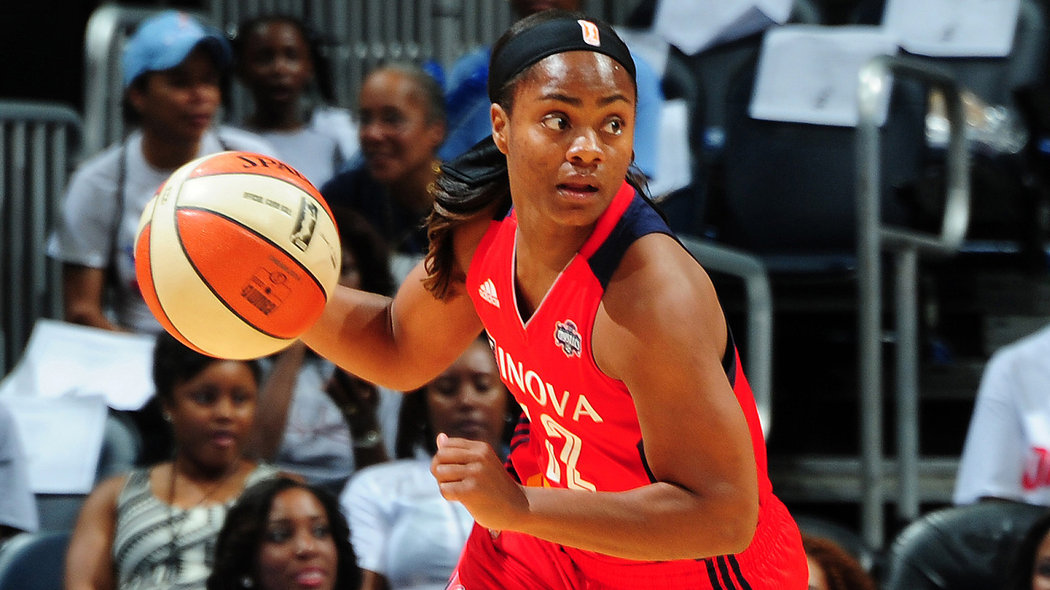 CWS: Her ENERGY. Ivory can instantly get the team back on track with her level of passion and competitive fire. In a recent game, the opposition had gone on an 8-0 run, and then she hit 2 back to back threes...It not only kept the opposition at bay, but it lifted the confidence of the Mystics team because she hit those clutch shots....in the third quarter...clutch shots are not only at the end of games, and Ivory knows that, and gives her team what they need WHEN they need it. That is why she has been recognized as a 2 time All-Star in her two seasons here in Washington. A phone call to Ivory was the first thing that Coach Thibault did when he was hired as the Mystics Coach/GM...for good reason.

Andy: Ivory Latta might be the only one who can shoot the lights out for the 'Stics. A FG% of 39.5 and a 3-point percentage of 37.7. Given the threat in the post of the Mystics front court, Latta gets the advantage that defenses are going to go closer to the hoop, which can give her the ability to pop at the top of the key and knock back threes. And she's the team leader in those three points percentage, although Bria Hartley and Kara Lawson's numbers flirt with Latta's percentage, they need that threat to stretch the floor.

Albert: I like Latta's energy too. She also shared a personal story about a breast cancer scare earlier this season, which was detailed in the Washington Post. I encourage you all to check this piece as well.

BF: The Wizards have some fun, yet professional personalities on the team. The most notable player we can think of is Marcin Gortat, who is known for responding to fans on Twitter and joining in on other teams' huddles. Are there Mystics players who also are known for their personalities? 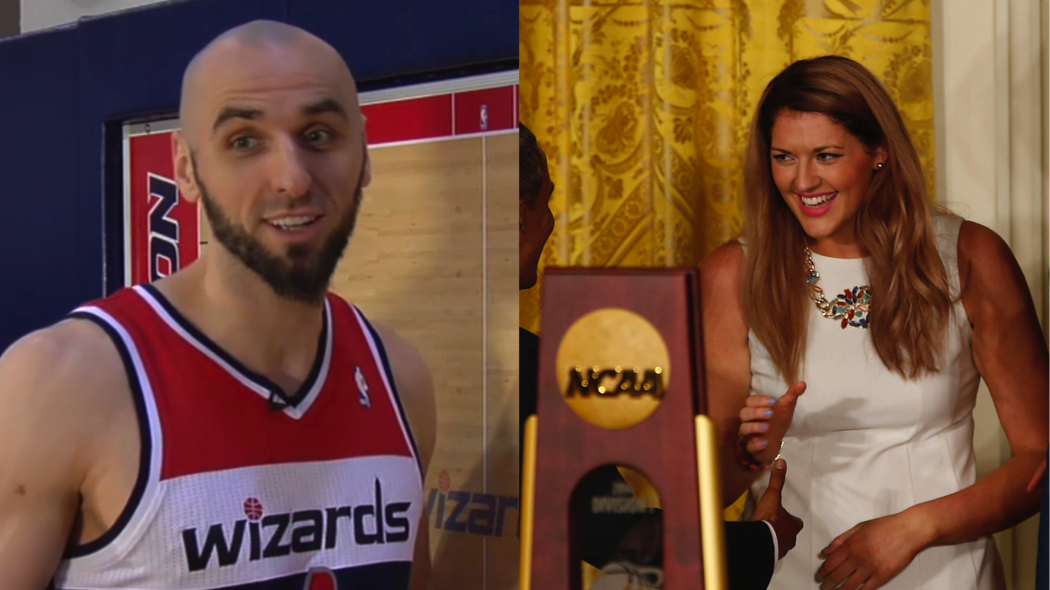 CWS: Absolutely! Ivory Latta may not join a huddle, but she will entice the crowd with a quick pregame "hype dance" before she hits the floor...and when there is a momentum swing for the Mystics, Ivory will be right in the middle of the pile jumping on her teammates, or "self talking" think Kevin Garnett...Stefanie Dolson, and Kia Vaughn are other players who do not have shyness as an issue. Dolson's well documented dance moves have caught the eye of President Obama, and Jimmy Fallon. Kia Vaughn has a comedic side, and it comes out at times during Mystics season ticket holder events.

If you cannot see the embed above, click here for the link from Monumental Network.

Andy: I agree, Dolson is probably the best fit for the outward celebrity. She dyes her hair purple, she falls off the stage at the White House [to celebrate UConn's 2014 national championship], and her Twitter avi is silly. She seems to have a good attitude about the whole process of being a rookie on a large platform and has a goofy side that has come out a bit, but will probably blossom once she gets more comfortable in the league.

Albert: I think Dolson stands out the most right now. Here are some more Dolson moments, where she sang Karaoke at a company picnic, and air fived herself during her first career start. But Latta and Vaughn also have their goofy sides as Christy and Andy mentioned.

CWS: I am honored and excited to have covered the Mystics since there inception to the WNBA. I appreciate being involved on a professional level with the game that I love so much. I'm looking forward to continued success for both the Mystics and the Wizards moving forward! Thank you for the opportunity to be involved on Bullets Forever!

Andy: Thanks for having me on!

Thanks again to Christy Winters Scott and Andy Livingston for helping us out here! You can follow Christy on Twitter @ChristyWScott51 and Andy @Elevator_Doors. For more on the Mystics' playoff series against the Fever, as well as the WNBA in general, please check out SB Nation's Swish Appeal.