We had a chance to speak with Comcast SportsNet's Christy Winters Scott and Impose Magazine's Andy Livingston to help give us a preview on the Washington Mystics' 2014 WNBA playoff series against the Indiana Fever, and their team in general.

As we mentioned last weekend, the Washington Mystics made the WNBA Playoffs. They will play the Indiana Fever in the first round. Game 1 is on Thursday at 7 p.m.

Some of you may be following the team closely, but others of you may not know about this team that well and want to know how they're doing. So, I asked a couple of people who follow both the Wizards and Mystics basketball teams to help us out.

First in our panel is Christy Winters Scott. Winters Scott is one of the hosts and analysts on Comcast SportsNet's Wizards pre/post game shows. She is also the Mystics' in-game color analyst during their home games which can be seen on Monumental Network, or WNBA LiveAccess, the league's equivalent of NBA League Pass. On top of it all, she is also the head girls basketball coach at South Lakes High School in Reston, Virginia.

Next, we have Andy Livingston, one of the writers on Impose Magazine, and has also contributed to Wizards XTRA. He has also been regularly following the Washington Mystics, and helped SB Nation's Swish Appeal out with some pieces as well.

Finally, I'll chip on most of the questions here. I also have a more detailed preview on Swish Appeal which you can see here.

This post is the first in a two-part series. In this part, we will discuss the Mystics' strengths, weaknesses, and their chances of making a deep run in the 2014 WNBA Playoffs. The second part will be released Thursday.

Bullets Forever: What are the Washington Mystics' main strengths as they head toward the playoffs? What will they need to do against the Fever in order to advance to their first Eastern Conference Finals since 2002? 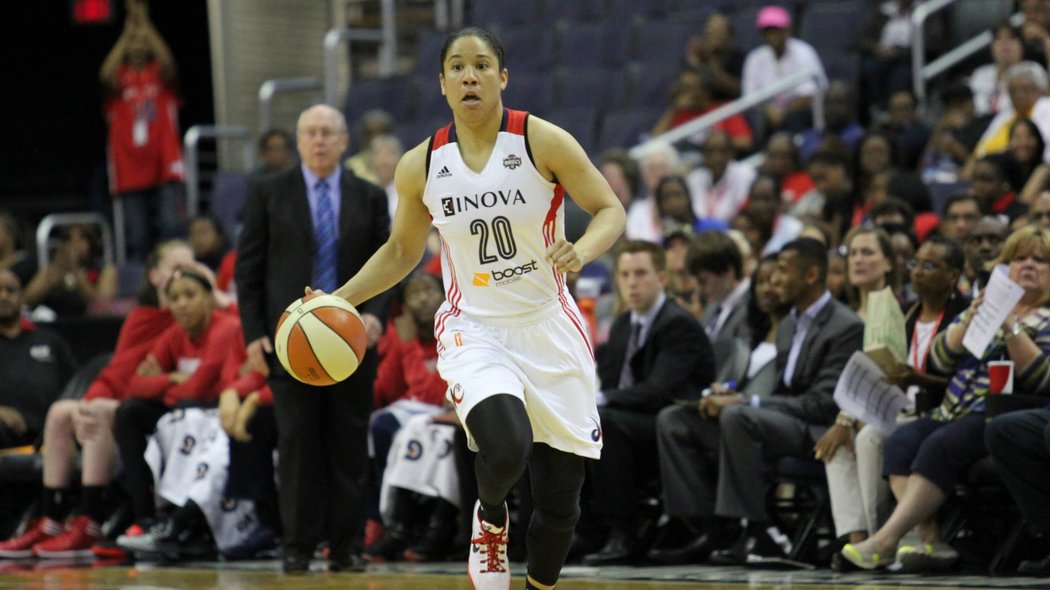 Christy Winters Scott: The main strengths for the Mystics is their defensive pressure. They have been in the top 3 all season in FG% defense (40%), and have won games on strong defensive stops. Versus the Fever, the Mystics will need to contain Tamika Catchings' paint points, and not give center Erlana Larkins second chance opportunities inside. Offensively, the Mystics need to keep great floor spacing in the 1/4 court, and look to get at least 10 points off of run outs from live ball turnovers.

Albert: I will start out by putting out the WNBA's Four Factors of Basketball on offense and defense for the 2014 season, along with pace, offensive, and defensive rating. This will lay out many of the points I will say from here on. This list is sorted by Defensive eFG%:

The most heavily weighted factor is eFG%, and the Mystics are second in the league on the defensive end, only behind the Phoenix Mercury.

The Mystics' defensive rating is also at 98.6 points per 100 possessions, third best in the WNBA. It's rare to see teams make over 50% of their shots against Washington - it's only happened 4 times. Even on offense, the Mystics have the highest eFG% in the Eastern Conference, so this team is able to make shots more efficiently than other teams, even though that is only part of the story on offense.

BF: What are the Mystics' main weaknesses that they will need to shore up when they play the Fever?

CWS: Offensive consistency... In the games that Washington has struggled, it has been because of their offense. Statistically, the Mystics have found tremendous success when they have at least three players in double figure scoring. (notably Ivory Latta, Emma Meesseman,  Monique Currie, and Bria Hartley). I feel that their offense has to thrive from their defense more. Also, slow starts have hurt them in games down the stretch of the regular season. Early offense needs to happen vs Indy.

Andy: The offense has been a weakness and that needs to change immediately. The 'Stics only have two players that average in double figures in points per game. Currie, Kia Vaughn and Hartley all need to step up, because Latta and Meesseman cannot handle the bulk of scoring alone.

Albert: The Mystics are a turnover-prone team offensively, which negates the high eFG% in the Four Factors to a good degree. Their TOV% is 16.28%, third highest in the WNBA. A high turnover rate isn't necessarily a problem if the defense can force even more turnovers. But the Mystics defensive TOV%age is a league worst 13.59%. This indicates to me that the defense isn't looking for enough opportunities to get steals, even if they don't allow opponents to score at a high rate. To be fair, it's really hard for a team to hold opponents to a low eFG% AND have a high TOV%.

To put some perspective, let's use the NBA and the Four Factors here. The Wizards had one of the NBA's top defenses in the 2013-14 season. They were 14th in Defensive eFG%, but were second in TOV%. The Bulls and Pacers were the best teams in defensive FG%, but they were also in the bottom half for TOV%.

BF: The Mystics haven't been successful on the court where they are 224-342 all-time. During their history, the Mystics also went through many failed coaching regimes.

However, current head coach Mike Thibault is considered to be one of the WNBA's best. In fact, he won the most regular season games in league history, primarily from his time with the Connecticut Sun from 2003-12. What makes his regime different from those in the past? 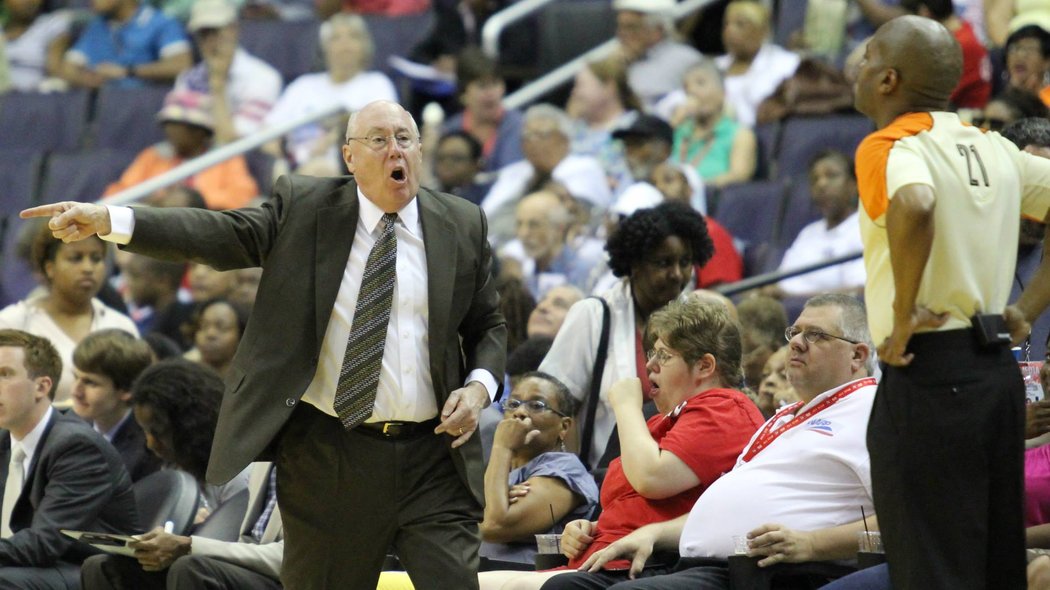 CWS: This will be the Mystics' fourth playoff appearance in six seasons. Coach Thibault has found success here in D.C. because he knows what he wants. And when he has it, he knows how to combine the right kinds of players. In his 12 years as a head coach in the league, he has only missed the playoffs two times while in Connecticut. (His teams won 16 and 17 games in the seasons without playoff appearances in 2009 and 2010, respectively.)

With that being said, he has been named the WNBA's Coach of the Year three times, including last season in Washington. He has a great passion for the game, and creates an expectation of winning with his team. Making the playoffs is good, but he wants to be great, and he does not expect for the team to be satisfied with simply making it to the postseason. He wants to win the whole thing.

Andy: Defense and rotation. It's nothing splashy, but Thibault has ten of his twelve players going for more ten minutes per game. They also have a killer defense that is limiting teams across the league and do not have a singular defensive star like Brittney Griner. He keeps legs fresh and emphasis stops, which works well with a team that features Stefanie Dolson, Meesseman and Vaughn, who combined for 86 blocks this season.

Albert: What sets Thibault's regime apart to me is Ted Leonsis. He has taken a more visible role as the Mystics' owner, in particular since Thibault was hired. They communicate on a a regular basis and appear to be on the same page. In the past, Leonsis has not been that visible with the team as compared with the Capitals and the Wizards. While Team President/Monumental Sports Vice Chairman Sheila Johnson still remains a visible and important figure for the Mystics, it's clear that Leonsis has now made his mark as well.

Thibault, also supports the Wizards as much as anyone. You can just see the knowledge and passion he has for the game whenever he gives a game preview here and here among numerous Monumental Network features he did for the team.

He is a former NBA assistant coach, where he was on the Lakers' staff when Magic Johnson was a very young player; to the Chicago Bulls when Michael Jordan was drafted; and to the Milwaukee Bucks, at the same time when Ernie Grunfeld was their GM, and when Ray Allen led them to the 2001 Eastern Conference Finals.

BF: This year, the East doesn't have a single 20-win team, but it is even from top to bottom, so the Mystics may have a good shot to make a deep playoff run. The East was the same way in 2004, when Thibault led the 18-16 Sun to the WNBA Finals. What similarities and differences do you see between the 2004 Sun and the 2014 Mystics? 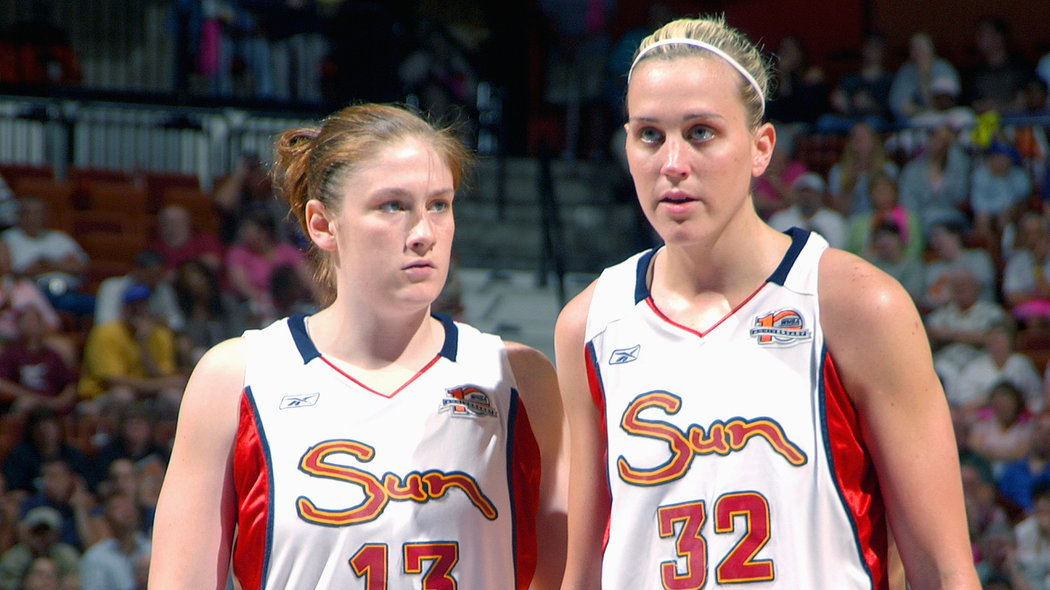 Lindsay Whalen (L) and Katie Douglas (R) were not top picks in the years they were drafted in 2004 and 2001 respectively. However, they were young core players on Mike Thibault's 2004 Connecticut Sun team that made the Finals. After that point, Whalen and Douglas developed into one of the league's best backcourts for several years. - Photo by Terrence Vaccaro, NBA

CWS: I think that the 2004 Sun team and the 2014 Mystics are similar in the fact that they both have/had a good mix of youth, and experience. Lindsay Whalen was a rookie, and they had Taj McWilliams-Franklin, who was a 9-year vet at the time. For Washington, Bria Hartley is a rookie starter, and Monique Currie is in her 9th season...The Mystics have 7 players who are in their first or second seasons in the WNBA. I feel that you need a little bit of both to be successful, and it seems as though Mike Thibault, the GM/Coach, feels the same way.

Albert: The Sun's and Mystics' records were similar on the surface. Then both the 2004 Sun and 2014 Mystics were among the Eastern Conference's best teams based on defensive rating. However, the Sun was the best team in intra-conference play (14-6) by a significant margin, while the Mystics were even with an 11-11 intra-conference record.

But I agree with Christy that the 2004 Sun team had a good mixture of veterans which also included multi-time All-Star Nykesha Sales, and youth which also included reserve third-year forward Asjha Jones. Lindsay Whalen played alongside fourth-year guard Katie Douglas as the team's starting backcourt, where they became one of the top perimeter duos in the league over the next several years until they were traded to other teams.*

*Douglas is once again a Sun player after signing a free agent deal in the 2013-14 offseason.

BF: We recently had an off-season series on pivotal moments for the Wizards' 2013-14 season. The Mystics' season isn't over yet, but is there one signature moment that helped define the current team's success?

CWS: I think the early season triple overtime victory over the L.A. Sparks gave the team an early dose of confidence. Also the fact that the Mystics had one of the best records in the East vs Western Conference teams...which did have teams with over 20 wins. Overall, with the youth of this year's team, I'm not sure that many had the overall belief that the Mystics could make back to back playoff appearances, but here we are.

Andy: I can't think of a singular moment and that maybe is what defines the Mystics this season. The dismantling of the New York Liberty where they held them to 46 points speaks to the defensive prowess of the Stics, but also speaks volumes about how bad the Liberty was this year.

Albert: For me, I would say that the Mystics had a critical stretch in July where they won six of eight games. In that time, they increased their pace of play, made a more concerted effort to go to the free throw line, and started making their three point shots at a higher level. I wrote more on it here.

In the second part of our panel, we will discuss topics which include similarities and differences between the Wizards' and Mystics' rebuilds, and who the biggest personalities are on the teams.