Will the Wizards remain a top defensive team?

We covered how losing Trevor Ariza in free agency could improve the offense, now we break down how the Wizards will look on the other end of the floor. Can Randy Wittman adjust to life without his best wing stopper?

Share All sharing options for: Will the Wizards remain a top defensive team?

Say what you will about Randy Wittman - that he may not be the right man for the job, that his offense needs to improve, etc - but give him this: He's become an increasingly adaptive coach on the defensive end.

He doesn't rest on his laurels, and he doesn't have a set system in place. There have been a lot of moving parts on his Wizards teams, and he's overcome some devastating injuries to several of his starters over the years. There's plenty of excuses he could come up with had Washington suffered a down year defensively. Whether it be Nene missing a month of the season or losing Emeka Okafor on the eve of the regular season, Wittman has made the necessary adjustments.

Now he faces the challenge of replacing his most consistent starter from a year ago in Trevor Ariza with a seasoned Paul Pierce. But this isn't a case of plugging Pierce into the role Ariza piloted and watching the team come apart at the seams.

It certainly wasn't the case last season when Gortat made a similar transition either. Washington went from a unit that walled off dribble penetration to a team that played much more conservatively in the pick and roll the following year. Check out the disparity in the amount of midrange shots the defense gave up in the last two seasons.

As such, both teams still finished in the top-10 in defensive rating. With Okafor, a lot was asked of him because he was so adept at timing his rotations and recovering swiftly to protect the rim. He zoned up high pick and rolls to prevent guards from getting into the lane, but jumped out on them and showed when the plays started below the three point line.

The Wizards tried using Gortat in that role early on, and he couldn't find that same balance. He jumped out on pick and rolls when he shouldn't have and often displayed poor technique in the process. 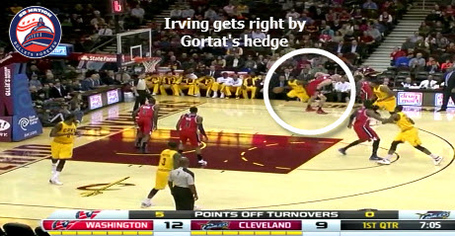 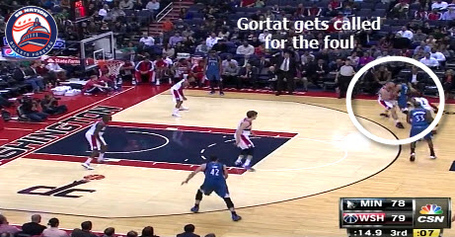 Not only were the Wizards hemorrhaging points at the basket, but they were getting killed on the boards, which set off a chain of other problems. Only four other teams posited a worse rebounding rate over the first full month of the season than the Wizards, and most of it was tied to Gortat getting strung out on the perimeter.

Wittman adjusted his scheme like a lot of coaches would have done, and sure enough, Gortat eased into his new role. Watch as he backpedals to keep with Al Jefferson's roll to the basket even before Gerald Henderson makes his move into the lane.

This may have rescued Washington's defense from falling off a cliff, but ask anyone who was the saving grace of this team, and Trevor Ariza will be the first to come to mind.

The numbers won't paint the whole picture for him. It won't show the number of times he played perfect denial defense on his man, mirroring his every move and forcing the offense into a different action. It won't show the way he slid his feet against the leagues' best isolation scorers, or how he constantly bumped them off their spots and into contested jumpers.

That's not something a boxscore can quantify. His role on defense seemed to only get talked up in crunch time or when he jumped into a passing lane. It's really defined by everything else: his staunch defense in pick and rolls, how he avoids getting caught up in screens by slithering his way around the opposing big, and using his length and athleticism to recover and contest.

These are the things that'll be missed the most, and it's hard to pinpoint how Wittman makes up for the loss.

How might the defense look with Pierce instead of Ariza? At the start of last season in Brooklyn, Pierce really struggled in his traditional defensive setting at small forward. However, once Brook Lopez went down with an injury, Pierce slid up a position and defended power forwards last season.

That change coincided with Brooklyn's defensive surged in the second half of the season. By leveraging their length on the perimeter to rack up turnovers, running shooters off the three point line, and being free to switch whenever they wanted on and off the ball, they saved their veterans the burden of fighting through screens.

Some of it was less noticeable and probably less impactful - like the switch between Pierce and Andrei Kirilenko, or the subsequent one between Kirilenko and Joe Johnson - but over the course of 48 minutes, it all adds up to shrinking the floor for the offense. Less movement by the defense means the offense isn't able to attack mismatches, and it means having to operate against a set defense.

No team defended players coming off screens better than Brooklyn. They held opponents to just 37 percent shooting on these plays per mySynergySports, and it worked because they had four guys on the floor capable of defending along the perimeter. All of their experience manifested itself in the way they rotated off less-threatening shooters and how they slid off their men to impede ball handlers.

The on-ball switches are obviously more apparent, and they have the same lasting effect of avoiding running smack into screens. But the results fluctuated more and were contingent on the players involved in the play.

In the play above, Kevin Garnett is able to slide step for step with Dwyane Wade here, but it's because he had the better angle, and there wasn't much room for Wade to go anywhere else. Luckily for the Nets, rarely was there an occurrence where they didn't have the upper hand, and it's because they had so many players capable of switching.

Washington doesn't present those same advantages for Pierce. They've pigeonholed themselves into a team that exclusively plays in big lineups and their backcourt's lack of size means they can only switch against very specific match ups.

And the coach hasn't been the biggest fan of switching, even if his team experimented with it earlier last season. But now he has a full offseason and training camp to install a system that caters to everyone. Pierce has over 40,000 minutes on his odometer, and the Wizards can ill-afford to see their investment flame out, especially if Otto Porter isn't ready for big minutes.

Like the past two seasons, it'll come to down to what Wittman sees on the floor. I don't think he'll be completely averse to switching this time around if it means reducing the wear and tear on Pierce's body. But he knows it can't be a regular occurrence with this team, and management took the necessary steps to swallow the loss of Ariza the way they saw fit. They gambled on two big men instead of scouring the market for possible wing replacements, hoping to bolster the last line of defense. Losing Ariza may result in ball handlers getting into the lane more often, but now the Wizards have the size up front to compensate.

We'll see if it pays off. Washington's defense may not be a sure-thing to finish in the top-10 this season, but don't count them out. Randy Wittman has earned the benefit of the doubt.