The Wizards' 2013-14 season ended in May. However, Game 5 of their second round playoff series with the Pacers showed them at their best. The win also showed that they weren't going to just walk quietly into the night when on the brink of elimination.

The Washington Wizards faced the top-seeded Indiana Pacers in the second round of the playoffs.

Even though the Pacers were shaky coming into this series, they ultimately beat the Wizards, 4-2. The part about this playoff series that disappointed me the most wasn't that the Wizards lost this series in and of itself. But they were unable to win any of their three games at home.

Just when people were about to write the Wizards off and call it a year, they won in dominating fashion.

After their Game 4 loss on Mother's Day, where the Wizards blew a 19-point lead and lost 95-92, things looked bleak. Not only did it look like the Wizards would lose the series, it seemed that they would lose the very next game. The Pacers just won their third straight game to get to a commanding 3-1 series lead.

Sure, Roy Hibbert had his troubles, including the first round, where he was about as ineffective as ineffective can be. But again, the Wizards couldn't capitalize ... at all with home games.

There still was a game left to play. Can the Wizards pull out a win while on the brink of elimination? On Tuesday, May 13, the Wizards dominated the Pacers 102-79 to bring the series back to Verizon Center. A quick video recap from the NBA's YouTube channel is embedded at the top of the page.

Leading the way was Marcin Gortat, who had 31 points on 13-of-15 shooting, while adding 16 rebounds. Here's his shot chart. The man was automatic at the basket and from close range: 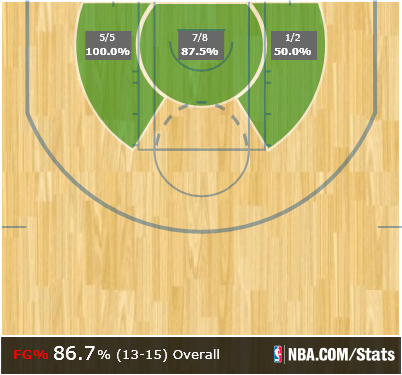 and here's a video showing all of his field goals:

John Wall's postseason didn't quite match his regular season performance, and this series in particular. But in Game 5, he scored 27 points and made 3-of-6 of his three pointers. Here's his shot chart (which includes a plot): 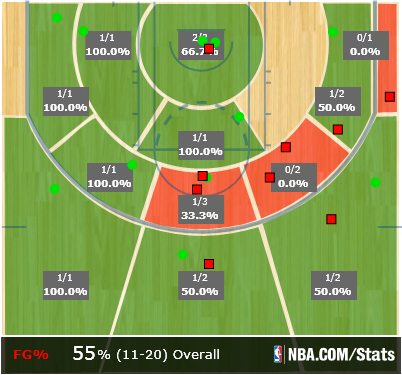 And a video of his shooting performance:

So, what made this game the pivotal moment in May?

Often times, a team being down, 3 to 1 in a best-of-seven series generally means that it's the end of the road. Especially after three straight losses, with the last two at home. The Wizards at this point were just asking to be put out of their misery. And let's say a team is down 3-1 in a playoff series and wins Game 5. Often times, it's a game where that team just squeaks by.

The Wizards happened to be in this exact situation in their 2008 playoff series against the Cleveland Cavaliers where they were down, 3 to 1. Before Game 5 of that series, then-owner Abe Pollin summoned the team to his office, where he said:

"I don't care about the series. I just want to win this game, just this one game. Go up there, and you guys win it for me.

In Game 5 of the 2008 playoffs, the Wizards won, 88-87, but they squeaked by, and they were losing for most of the fourth quarter. Caron Butler scored the game winner as you can see the video here...:

...but that win was one of those classic squeezers where the Wizards were only delaying the inevitable. And they were eliminated in Game 6 of that series getting blown out, 94-78.

This Game 5 had a much different tone to it. The Wizards, in particular Gortat and Wall, played with a very high degree of confidence, and the win was emphatic. It gave fans the hope, even the expectation that the Wizards would have a chance to not only win Game 6, but maybe even take this series in Game 7. I really felt that we could have done it.

And yes, the Wizards lost Game 6 of the second round, 93-80. At the surface, it appeared like this was a normal wire-to-wire win, and the Pacers were leading by double digits for much of the game, including the third quarter.

But Washington made a furious comeback late into the third and into the fourth quarter, and we saw this from 4:16 to 4:26 when Beal grabbed a rebound from Hibbert, and drained a go-ahead three:

I know that the Pacers came back from that point on, but even in Game 6, the Wizards still made this a game late, and if a basket or two more fell their way late, maybe we could have seen a Game 7.

Now, let's take a step back and think about a "what-if" here. If the Wizards lost Game 5, yes, the season would have been great overall, but do you think the optimism still be at the same level as where it is today? And I'll touch on Game 6 a little bit too. What if the Wizards managed to win that game? Do you think Washington could have pulled off Game 7 in Indy to earn a berth in the Eastern Conference Finals?

I'm of the mindset that the 2013-14 Wizards were more than capable of winning one more game on the road. After all, their road playoff record was 4-1, and they actually seemed to be more comfortable on the road altogether. So yes, I do think the Wizards would have made the Eastern Conference Finals if they won Game 6.

And that leads me to the end of this series of pivotal moments for each month in what was the 2013-14 season. For the other moments, click here for our StoryStream. Were there other moments that you believed were pivotal during the month of May win the Wizards-Pacers series?

And which moment do you think was the most pivotal throughout the season based on each month? Share your thoughts in the comments below, and a poll's attached!