The Wizards' center wore an interesting shirt, then gave a brief interview with NBATV where he explained his decision to re-sign with the Wizards.

Share All sharing options for: Marcin Gortat shows up to Orlando Summer League in appropriate attire

That is what Marcin Gortat wore to the first day of the Orlando Summer League on Saturday. Why was Gortat there? He lives nearby, and like us, he apparently can't get enough basketball.

(In case you're reading, Wizards PR folks: this gives us the right to wear any T-shirts we want to games next year right? That's what I thought. Cool. Just checking).

Gortat also spoke briefly to Matt Weiner and Kendall Gill at halftime of the 76ers-Magic game, which you can see here. He said "a few" teams expressed interest in him, but he liked the city and the team, so he decided to come back. He also said that while the Wizards would "love to have [Trevor Ariza] back," he understands that "it's a business" and believes the Wizards will "do the right thing." He also noted that a goal next year was to limit Nene's minutes to not "overload" the guy," which I found interesting. You'd need more frontcourt help to do that, but it's a very good goal.

The best part, though, was when he explained this famous photo.

"After [my last camp for kids], we had a celebrity game," Gortat said. "My team, we collected all sorts of different athletes, artists, actors, and we were playing versus the Polish army. The Polish army was kind enough to bring a few toys, and we were able to ride a tank."

And there you have it. 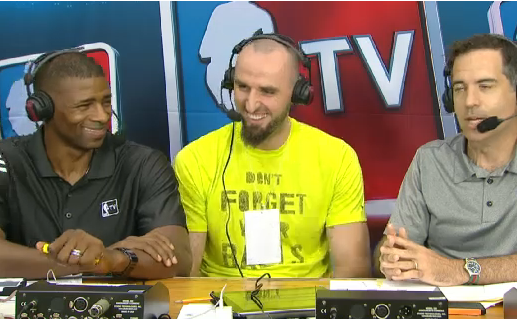