How Paul Pierce can diversify the Wizards' offense

The Wizards will probably shoot lots of mid-range shots again next year. Here's how their offense can get better even with the same shot distribution.

Share All sharing options for: How Paul Pierce can diversify the Wizards' offense

Remember all the fuss about the Wizards' mid-range-heavy offense last year? Of course you do. It was arguably the hottest on-court topic of the year, one that even made its way to Randy Wittman at one point.

As public opinion of good offense in the NBA swayed toward threes and layups, the Wizards hoisted more 16-23-foot jumpers than any other club. Despite the volume, the Wizards hit just 38.1 percent of such attempts, 20th in the league. If you're wondering why the Wizards had a below-average offense, that's why.

The issue is complicated by several factors. Wittman's defiant attitude toward any questioning of the team's shot distribution surely indicates he doesn't think it's as much of an issue as many of us do. At the same time, Wittman isn't the one hoisting the shots when better ones could be discovered. That's mostly on John Wall and Bradley Beal, each of whom took bushels of long two-point jumpers while hitting them relatively infrequently.

And we probably need to think deeper too on this issue. The structure of the roster plays a role, since the paint will be crowded as long as Wittman insists on playing two traditional big men for defensive purposes. It should also be noted that the strategy may be an example of the Wizards using game theory to their advantage -- if the league's best defenses are giving up the shot as a strategy, it could pay to have players willing to confidently take what they are being given.

Regardless, the question must be asked: will the Wizards ditch their long two tendency this year?

Surface-level analysis suggests the answer is no. The Wizards' best three-point shooter from last year is now in Houston. His replacement shot lots of threes last year, but had a more even distribution in past years when he was playing small forward, where he'll play in D.C. Their second-best three-point shooter recently had back surgery; his replacement in the rotation looked better in Las Vegas because he was able to show off his mid-range game. None of the new big men signed have three-point range either.

But there are two assumptions that must be challenged before we hop on board with that. The first: the Wizards need to trade in some of those mid-range jumpers for threes. To some extent, they do. They were 19th in three-point attempts per game and many of those threes came in transition.

But the bigger issue was the lack of scoring around the basket. Washington also ranked 19th in shot attempts inside of five feet per game and 26th in free throw attempts per game. When Wall was out of the game, the Wizards didn't have anyone that could challenge a defense off the dribble, and even Wall has much room to grow in this regard.

Even with the rising importance of threes, the basket is the most important area of real estate on the court. Getting to the basket collapses the defense and opens up many of those easier three-pointers. The constant settling of mid-range jumpers is ultimately an effect of not having someone that can threaten the heart of a defensive scheme.

Thus, the operative question is whether the Wizards are better equipped to create more efficient shots, not necessarily whether they can trade mid-range attempts for threes. I say "not necessarily" because clearly the gravitational effect also works the opposite way. Having good three-point shooters helps open up driving lanes just as much as driving lanes open up three-point shooters.

But here we must return to the important distinction that was also made in last Friday's piece: it's the threat of a shooter that opens up lanes for others. Here, Pierce has an advantage over the outgoing Trevor Ariza by virtue of being PAUL PIERCE. There were plenty of instances where teams did not respect Ariza even though he was proving to be a dangerous outside shooter, choosing instead to send his defender to wall off the lane. For example:

The Bulls overload the strong side more than any team in the league, but they would surely think twice about drifting that far off the weakside corner man if it was Pierce instead of Ariza. Otherwise, something like this happens.

That's the versatility Pierce offers as a threat. Whereas Ariza is mostly just a shooter (though he worked to become a better driver during his time in D.C.), Pierce is a shooter, driver and cutter all wrapped in one package. If the defense drifts off him to build a wall against the Wizards' guards, they risk a kickout pass that leads to more avenues to score than just a three-pointer.

Consider: a whopping 69 percent of Ariza's spot up possessions (as defined by Synergy Sports Technology) ended in a three, whereas only 48 percent of Pierce's did. Ariza was more efficient by this measure on spot-up opportunities, but he also had the advantage of Wall setting him up. Imagine how good Pierce will be with Wall as his teammate. Add in that Pierce is a better playmaker, and there's more for the defense to worry about on such kickout passes. 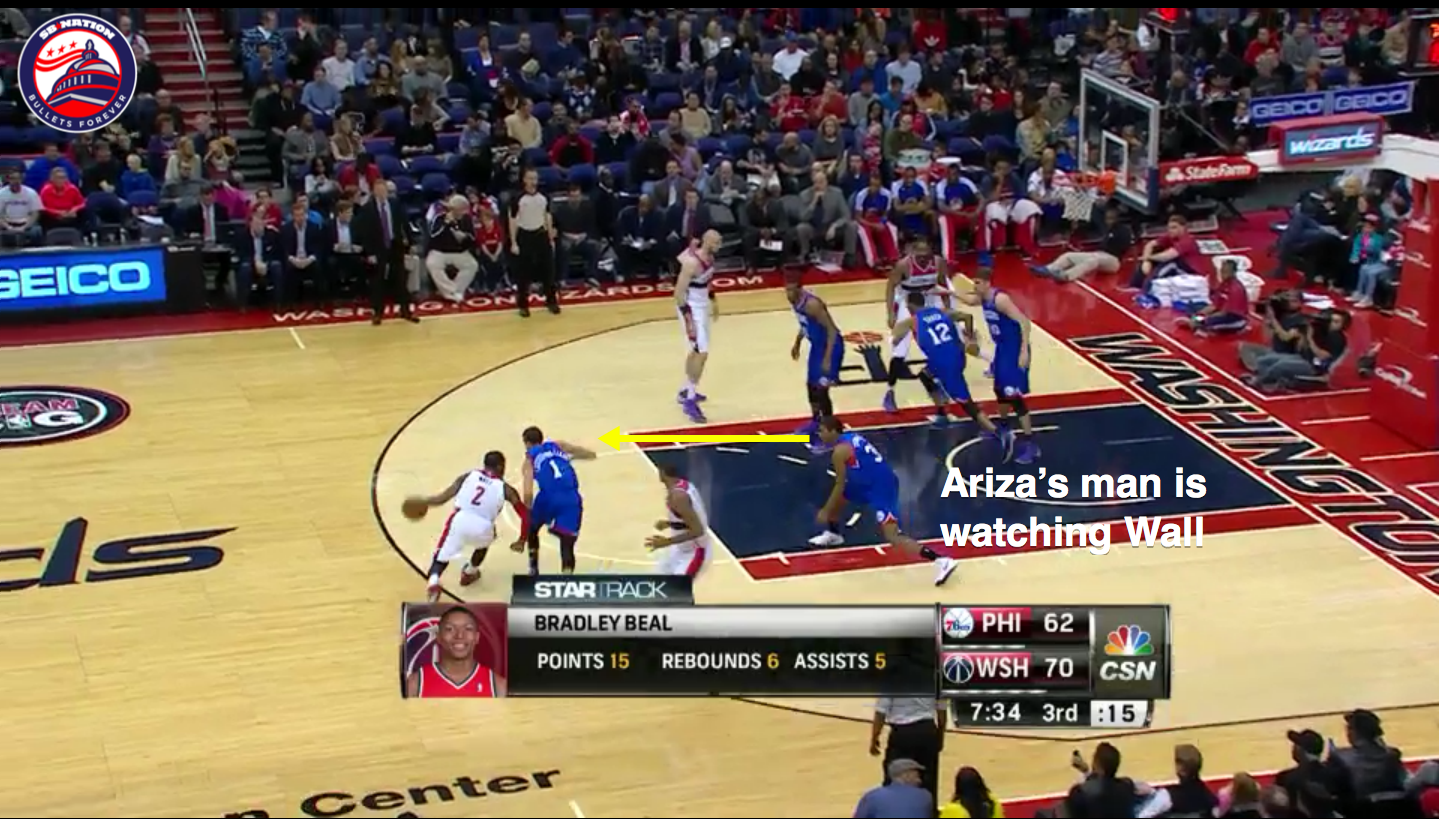 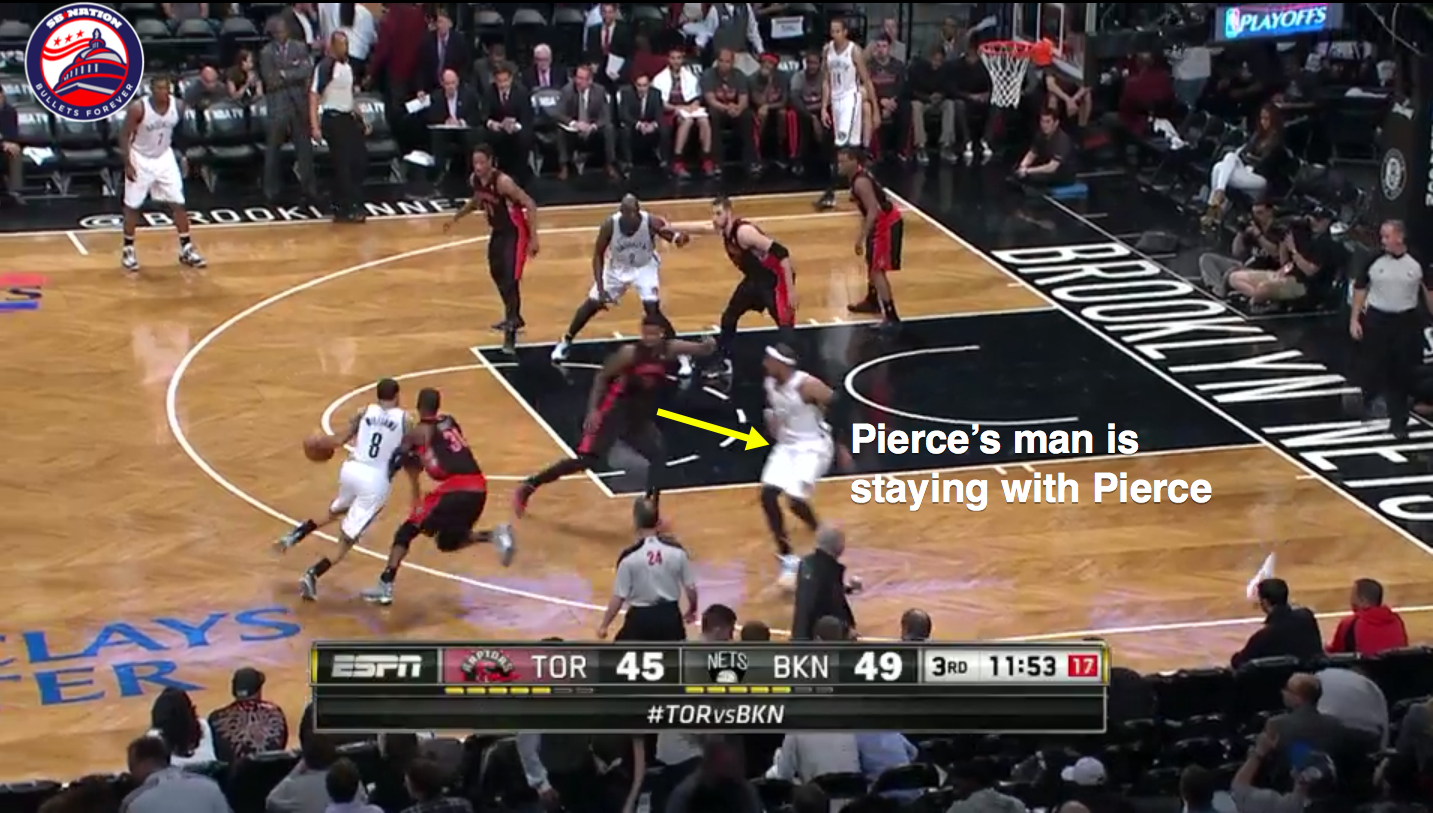 I chose these two plays because they are similar sets. In the first one, Ariza's man is ignoring him to act as another roadblock for Wall's drive to the lane. In the second one, Pierce's man stays with him, opening up a sliver of space for Deron Williams to get toward the hoop. The gravitational pull of Pierce helps Williams penetrate, whereas Ariza's tractor beam is non-existent.

This especially matters in D.C. because one of the Wizards' pet plays is initiated by a side pick and roll between the point guard and the small forward. Pierce will be so much better at executing that set than Ariza ever was.

There's a biiiiig caveat to all this. Pierce succeeded in this role in Brooklyn's unconventional style in large part because he was going against slower power forwards. It's hard for someone like Amir Johnson, for example, to help on the nail and close out properly on Pierce. He just doesn't have the foot speed, especially against Pierce's crafty spot-up abilities. Can Pierce still get to the basket and/or pull defenders away from the middle if he's going against the Jimmy Butlers of the world instead? That's a concern that better turn up positive for the Wizards' sake.

But that leads us to the second assumption: will the Wizards really shoot as poorly on mid-range looks as they did last year? Even if Pierce works out as advertised, those looks will still be there often for Wall and Beal. Last year, they each shot around 37 percent on those shots (36.6 for Wall, 37.2 for Beal). That's not great, especially given that they combined to take nearly 48 percent of Washington's mid-range jumpers.

But they're also both young, so ... what if they, you know, improve their jump shots? Many of their misses were wide open or open-ish looks, even if they were rushed. With more and smarter practice in the offseason, Wall and Beal can turn several of those misses into makes. How much more efficient would the Wizards' offense be if both took the same frustrating number of mid-range jumpers, but hit around 40 percent of them instead of 37? How much more would defenses cheat up to contest those shots, thereby potentially yielding driving opportunities? We don't know, but certainly that change would help prop up the Wizards' offense.

Time will ultimately answer these questions, but I think we can agree that expecting a major departure from the Wizards' mid-range ways may be expecting too much. This is the same head coach and two key three-point shooters have been subtracted, at least to start the season.

But there's also some rays of hope that the Wizards' offense can improve despite maintaining its despite this sub-optimal shot distribution patterns. Here's hoping those subtle changes can lift the Wizards to new heights.