Signing Paul Pierce accomplishes many goals at once

The Wizards stunned the basketball world by getting Paul Pierce, and it was a great move because it serves multiple purposes.

Share All sharing options for: Signing Paul Pierce accomplishes many goals at once

The Wizards' front office likes to pride itself on making moves that nobody sees coming. That doesn't always hold true -- the team's interest in Jan Vesely in 2011 could not have been more easily telegraphed -- but goddamn it certainly does in this case. I'm still stunned that Ernie Grunfeld and company landed Paul Pierce after losing Trevor Ariza to the Rockets.

There's a lot to think about here, so let's walk through it.

A validation of relevancy

The Wizards so badly wanted to make it to the playoffs last year to the point where many (including I) understandably worried about whether they had the wrong priorities. The Wizards' thought process, though, was they had to be good before becoming great. The only way they'd ever have a chance to sign free agents was if they were perceived as a team on the rise.

Lo and behold, they made the second round, saw their two young guards break out and are indeed perceived as a team on the rise. Note how Pierce himself talked about the Wizards last March, even before the playoff run.

"They're good," Paul Pierce said of the Wizards after the Nets failed to make a field goal over the final 6:22 and allowed Washington to close the game on a 14-3 run. "They're coming into their own. They're growing up right before our eyes.

"You've seen their struggles over the years, and John Wall has matured as a player, obviously, becoming an All-Star this year and taking on more responsibilities and becoming a leader for this ball club. That's what the Washington Wizards have been waiting on, and you're seeing it."

Of course, it'll take more to be a DESTINATION than seeing a former great at the end of his career sign on, but it's still a major statement. Pierce wanted the Clippers and would have settled for the Nets, but he could have gone anywhere. That he chose the Wizards says a whole lot about how the team is perceived. 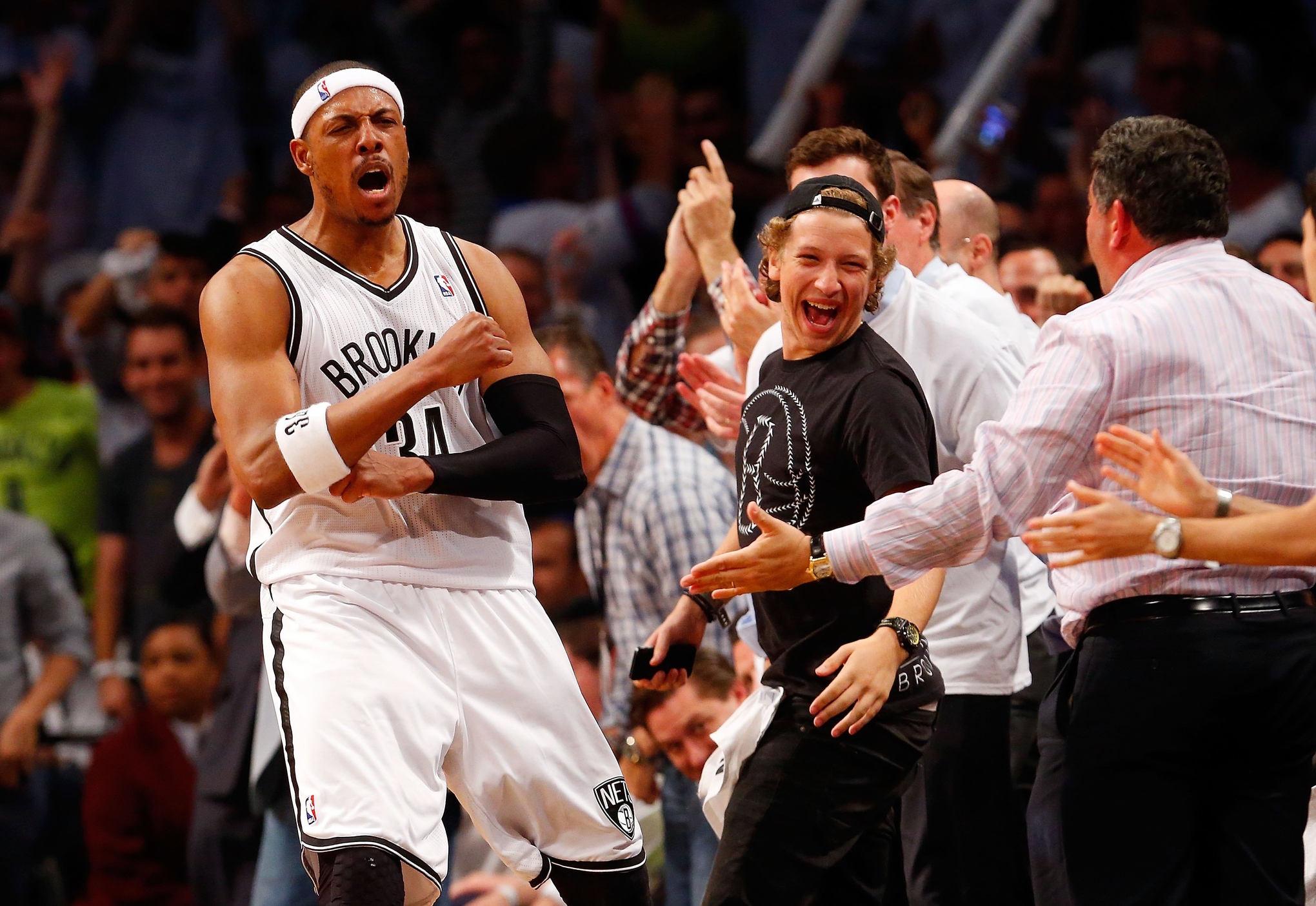 The on-court fit is good, but not perfect

First, the obvious: Pierce had a lot left last year. You never know when older players completely lose it, but Pierce now takes great care of his body and knows how to optimize whatever gifts he still has left. He should still have a lot left next season.

He's no longer a primary option offensively, but he doesn't have to be with John Wall and Bradley Beal initiating so many sets from the perimeter and Nene still being Nene in the post. Imagine a scenario with Wall and Marcin Gortat running a pick and roll with Beal and Pierce spotting up in the corners. That's deadly. And Pierce is an adept spot-up player that no longer needs the ball in his hands to initiate plays. That was a big part of his evolution over the past few years.

Pierce's clutch play is also a huuuuge reason for this signing. You don't need me to tell you how painstakingly awful the Wizards' crunch-time offense was at times last year. You also don't need me to tell you how many times Pierce has come up big in huge situations throughout his career. A 1-3 or 1-4 pick and roll with Wall and Pierce immediately becomes the Wizards' bread and butter set play late in games. Both players can take advantage of a sliver of daylight to get what they want.

I'm also confident that Pierce can run with Wall, even though he's not as athletic as Ariza. Trailing threes is a Pierce specialty, and you know Wall will set him up for those.

There are some concerns defensively. The Wizards will definitely miss Ariza's ability to switch onto any sort of primary option, which became more valuable as Marcin Gortat slowly picked up the system. Pierce expends great effort on that end, but he's lost quickness and can't check the top wing options as well as before. It's unclear who the Wizards will use for that role going forward. No longer does Randy Wittman have the luxury of using Ariza on anyone.

It'll also be interesting to see where Pierce plays. One big reason for his strong season in Brooklyn was that he played so much at power forward, allowing him to take advantage of slower defenders. When he played at the 3, he wasn't quite as effective. Wittman would be smart to use Pierce at the 4 as much as he can, but it also goes against his ethos and it will force Otto Porter into action. How will Wittman find that kind of time? (One obvious answer: when Nene is injured).

Obviously, you know about the leadership angle too. Pierce certainly provides an excellent example for Wall, Beal and Porter, and that's a huge element of this signing. 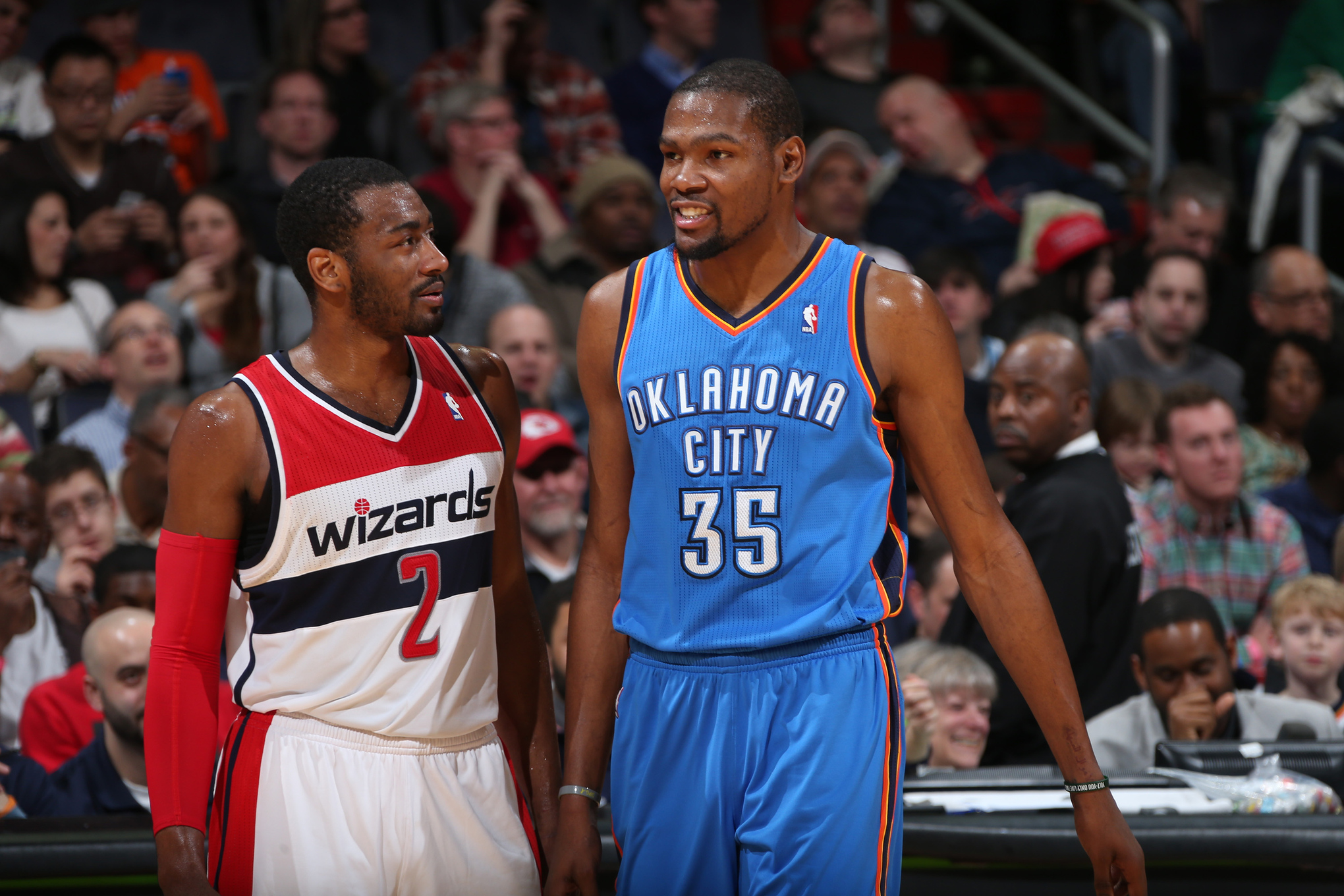 Flexibility for the future

The other key element to this: Pierce's deal expires right before the summer of 2016, when Kevin Durant (and maybe LeBron James) is a free agent. The Summer of Durant is a real consideration with the Wizards, especially now that James provided the path for returning home. It's obviously a longshot to snare him from Oklahoma City, but a longshot is better than no shot. The Wizards, like many other teams, are preparing for it.

In doing so, the Wizards needed to balance two factors: winning and flexibility. That's hard to do, but with this signing, they came closer to accomplishing these two goals. The Wizards currently have Wall ($17 million), Gortat ($12 million), Webster should he play enough games ($5.8 million) and Porter ($5.9 million) under contract. Beal's also due an extension that's surely going to be for the four-year max, whatever it is. That still should leave enough room for a max deal for Durant depending on how much the cap rises, though there are tons of other factors (future draft picks, other deals that'll be signed and minimum cap holds) that'll factor in.

Keeping Ariza at his price would have eaten too far into that number. Signing Pierce instead keeps it open, all while the Wizards continue to succeed on the court.

There are still questions to answer

Signing Pierce is great, but the roster is far from settled. The frontcourt is still thin and the one key mechanism to improve it is now being used on someone else. The Wizards plan to counter by keeping Trevor Booker using his Bird Rights, a league source confirmed to Bullets Forever. We know Drew Gooden should be back for the veteran's minimum, and Garrett Temple could return too. Kevin Seraphin, as of now, is an option as well,

After that, the Wizards can only use the minimum salary and two small trade exceptions ($2.016 million and $1.254 million) to add talent from elsewhere. Emeka Okafor is an obvious name to chase, but the Wizards can only sign him for the minimum. Otherwise, Booker, assuming he returns, will need to be the third big man again, not counting Pierce of course. The Wizards might be thin again up front in the event of an injury.

The other operative question: what does this mean for Porter? This is certainly a better scenario for him than if the Wizards kept Ariza. Pierce can't play huge minutes at this stage of his career, is on a short-term contract, can teach Otto some tricks of the trade and slide to power forward in lineups featuring both players. That said, with Webster injured, Porter still needs to take a major step forward to secure minutes on the wing. (So does Glen Rice Jr., for that matter).

All in all, though, this is a low-risk, high-reward move that not only improves the team, but also improves its flexibility. Pierce may break down this year, but it's hard for me to think of another move that could have accomplished both goals. Kudos to Wizards management.