The Wizards' 2013 first round pick had limited playing time during the 2013-14 season. We evaluate his performance here.

We'll be evaluating each Wizards player, as well as coach Randy Wittman in this series.

Otto Porter was one of the Wizards' two rookies during the 2013-14 season and was the third pick in the 2013 NBA Draft. At the time Porter was drafted, many fans were pleased to see that a local college player from Georgetown would be on the team. However, unlike most Top-3 NBA draft picks, Porter did not crack the Wizards' rotation, and that was a major concern.

Before the season, we hoped that Porter would be in the rotation and be a solid two-way player. Before the 2013 Draft, Porter was regarded as one of the more versatile prospects available, so we hoped to have seen him as a point forward and develop into a versatile defender.

Porter suffered a hip flexor injury before the team's media day during the preseason. That denied him a chance to play during training camp and he didn't start playing until the Wizards' December 6 loss against the Milwaukee Bucks. But even after he started playing, Porter never really got into a groove for most of the season and quickly fell out of the rotation. Fortunately, Trevor Ariza and Martell Webster were playing at a higher level anyway. So it wasn't like Porter's lack of playing time was hurting the Wizards' performance last season in and of itself.

When first round draft picks aren't performing at a high level, it is inevitable that there will be calls for that player to be sent to the D-League. I made a case for it, because I believed that Porter could use a D-League assignment to build confidence back and as his own personal training camp. Jake had a post countering that, because the Wizards do not have a one-to-one D-League affiliate, and that an assignment would not fix his long term development.

Ultimately, the Wizards did not send Porter to Iowa. He averaged 2.1 points and 1.5 rebounds in 37 games during the regular season, making 36.3% of his shots, and was not particularly efficient from any area as you can see in his regular season shot chart below: 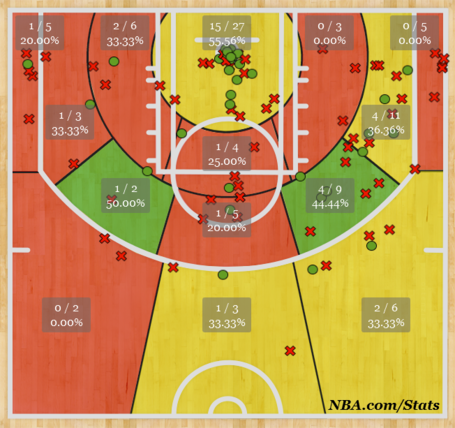 Given that he played sparingly in the regular season, Porter was not part of the rotation during the playoffs. He played spot minutes in three games.

Porter will earn $4,470,480 in the 2014-15 season with team options in 2015-16 and 2016-17. Considering his performance last season, it is unlikely that Porter will be traded. But if they did, the Wizards will miss an opportunity to develop a high draft pick who still has potential to make an impact on the roster. Should Porter be traded to another team and he pans out there, it could create a "What if" moment for the Wizards.

It was a tall order for Porter to make an impact on the Wizards' rotation during the 2013-14 season with Trevor Ariza and Martell Webster taking most of the minutes at the small forward position. This was compounded by the fact that he was injured before the season began.

But even during the time he was playing, Porter did not give Randy Wittman and the coaching staff a compelling reason for him to play more. Most Top-3 Draft picks are at least rotation players in their rookie seasons. Porter was not, and that is very disappointing. If the Wizards did not make the playoffs this past season, this would have also been a much bigger story.

This summer, it is a real possibility that Trevor Ariza may sign elsewhere as a free agent. Like Umair pointed out last week, Porter must pan out. Hopefully the coaching staff will invest the time in him to make sure that he does.