The Big Brazilian improved his midrange game and gave Joakim Noah fits in the playoffs, but he also continued his slow offensive decline and was an embarrassing free-throw shooter.

Since he was traded to Washington from Denver in 2012, Nene has been the team's veteran locker room leader and their best overall low-post player. However, he has been injury prone and missed significant amounts of playing time, primarily because of plantar fasciitis back in 2012. And his shooting efficiency had dropped over the past several seasons, even before he was traded to Washington. Would he still hold up in the 2013-14 season?

We came into the season praying that he would not miss too many games during the regular season, especially during the playoffs. Fortunately, he rested practically the entire summer and played soccer to stay in shape. Then, we also hoped that he would improve his shooting efficiency.

Nene played 53 games in the 2013-14 season, less than the 61 he played in 2012-13. He averaged 14.2 points, 5.5 rebounds, and 2.9 assists per game. Nene missed considerable time due to a sprained MCL during the Wizards' February 23 win over the Cleveland Cavaliers, but came back on April 9, just in time before the playoffs.

Last season, Nene's true shooting percentage was 53 percent, down slightly from the 2012-13 season when he averaged 53.8% overall. At a glance, that may be cause for alarm that his game was continuing to decline. 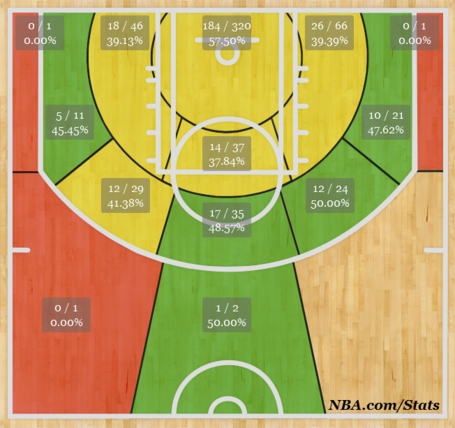 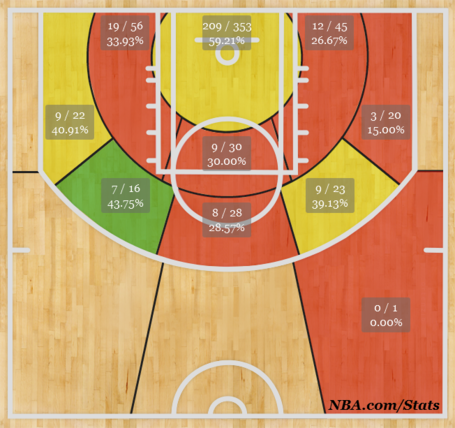 One place where Nene has been declining for several years has been his shots at the basket. His field goal percentage there dropped to 57.5 percent, down from 59.2 percent last season.

However, Nene's field goal percentage with his midrange shots has improved from nearly every zone listed on these charts. Furthermore, he was shooting at above league averages from most areas 16-24 feet away in 2013-14. Ultimately, Nene's game is evolving.

Nene was inconsistent during the playoffs. He had some really strong playoff performances, including Games 1 and 5 against the Chicago Bulls, where he was able to make shots at the rim and from midrange. He scored at least 20 points in both games. Then in the entire series, he was a matchup nightmare for Joakim Noah.

His lowest point was in Game 3 of the Bulls series when he got into a scuffle with Jimmy Butler and was suspended for Game 4 even though the Wizards won that game. And in the second round against the Pacers, he failed to make over 50 percent of his shots in all but one game of the series.

In the aggregate, Nene was effective from midrange in the playoffs, but at the rim, his field goal percentage was below average. Here is his shot chart from the playoffs in the 10 games he played: 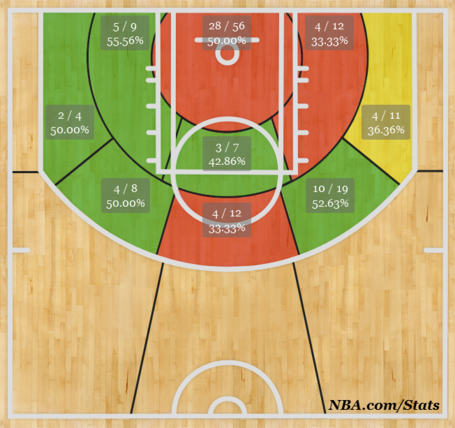 Nene is under contract to make $13 million for the 2014-15 and 2015-16 seasons. Therefore, it is likely that he will be in a Wizards uniform when you take into account that he is injury prone and has multiple years left in his current deal. But if he were to be traded in the offseason, the Wizards will miss a big man who is able to make plays in the high post and make midrange shots at an efficient rate.

Most of all, they will miss a player who was the first veteran locker room leader during the John Wall Era. Nene was the first player the Wizards acquired in order to bring about a culture change and move on from the time when JaVale McGee, Nick Young, and Andray Blatche were major figures in the locker room.

Nene (once again) was hampered by injury during the 2013-14 season. However, he was still effective when he was healthy, and came back just in time for the playoffs. Though the Big Brazilian's shooting at the rim continued to decline this season, his midrange shooting improved considerably. Next season, let's hope that he can remain reasonably healthy, continue to shoot consistently from midrange and regain his touch from the free throw line.