Roy Hibbert woke up and the Wizards shot themselves in the foot at the free throw line, but don't worry. The Wiz still got this.

We shouldn't have poked the bear.

Alright Roy Hibbert, we see you now. But you'll have to forgive if I'm not about to panic about this series. Despite an 86-82 loss in Game 2, the Wizards are still coming home having accomplished the one goal every team has when starting a playoff series on the road -- steal one of the first two games, and flip home court advantage.

Mike already expressed my thoughts to a tee this morning. This was the worst game Washington played all postseason...and they lost by four. On the road. To the top overall seed. So don't fret.

John Wall (six points on 2-of-13 shooting, eight assists, one turnover) and Trevor Ariza (six points, eight rebounds) both struggled. The Wizards shot only 12 free throws the entire game, which was somehow made worse by the fact that they missed seven of those attempts (Nene alone was 0-for-4 from the stripe). In a four-point game, I'm guessing that loomed large. Add on the fact that the Pacers made 18-of-21 free throws, and really Indiana should have won this game more handily than they did.

The Wizards didn't do everything terribly. Despite Big Roy's resurgence (28 points, nine rebounds) Washington still outrebounded Indiana, 43-38. They shot 45 percent, pretty good against the Pacers' defense (though only 5-of-21 from three), and racked up 20 assists on 36 made field goals. Marcin Gortat recorded 21 points and 11 rebounds, both team highs. Bradley Beal was effective again, with 17 points, seven assists and five rebounds.

Bottom line, win Game 3 at home and you're right back to where you were against the Bulls. Let's do this, Wizards.

13 - Indiana's scoring advantage at the free throw line in Game 2. The Pacers shot an absurd 18-for-21 at the charity stripe, while Washington shot a dreadful 5-for-12.

1 - Fast break points scored by the Wizards in Game 2. This will need to improve.

22.2 - John Wall's shooting percentage in Round 2. Wall has shot 6-for-27 in the two games against Indiana, and missed all seven of his three-point attempts.

Can't miss 7 free throws in a playoff game.@Pacers were in a near must win situation and did what they had to do. @WashWizards game 3 Friday

Gotta take that L. And like the split. #Wizards

Honestly. This game doesn't mean anything for momentum. The Wizards have homecourt. Hibbert had the offensive game of his life. #INDvsWAS

A split on the road and a game where the Pacers knew they had to right the ship or they were dead meat. Wizards still in good shape.

Wiz got stops, but didn't hit 3s, didn't hit FTs, and didn't run the break. They need those.

Fun game. Wizards shouldn't feel blue, but those FTs. Now we see if Roy Hibbert is back or if he just had his Dunleavy offensive game.

With Wall — couple iffy decisions late, but to be fair, this isn’t even a game without his third quarter.

That was the Pacers "Dunleavy" game, moving on.

@HoopDistrictDC We took their best shot and only lost by 4. Wiz fans should be more than satisfied with them coming back home tied 1-1.

Gotta credit the Pacers, too. Great gameplan, really clamped down defensively. Needed to win and did … barely.

Gorat on the home crowd in DC: "I hope they are going to destroy the arena for us....come early" #Wizards

So much to love about this photo after Gortat's dunk, Fav: Uncle Al politely clapping on bench #Wizards pic.twitter.com/Zk3DK9dKWW

For those of you who prefer "Polish Hammer" to "Polish Machine," this was for you.

I know I said we shouldn't have poked the bear, but this is just too good. I didn't even know you could make GIFs this long...

No where near the gif oracle, but I will entertain you as well.

I'm actually surprised by how measured most of you were afterwards. Well done. 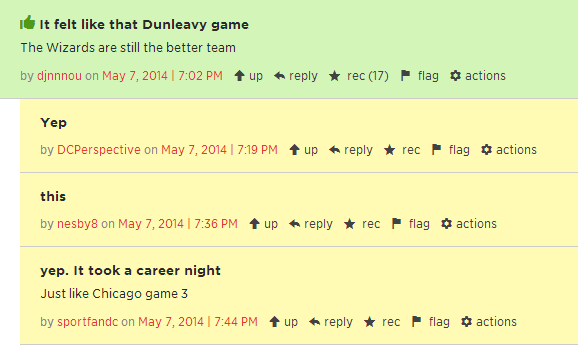