The veteran backup point guard came to D.C. in a trade deadline deal. He helped shore up Washington's bench unit, but how good was he, really?

From the beginning of John Wall's career, the Wizards have looked for a backup point guard to help orchestrate the offense effectively while giving him a breather. For different reasons, past options like Kirk Hinrich, Jordan Crawford and A.J. Price were not the best fits for the role. So, in the 2013-14 season, the Wizards signed Eric Maynor, who quickly fell out of favor. Though Bradley Beal played a number of possessions as the backup point guard, they ultimately traded for Andre Miller in a three-team deal which involved Jan Vesely and the aforementioned Maynor.

We expected Miller to help be a steadying veteran presence at the point guard position and help improve the performance of the bench unit. Miller knows how to take care of the ball, run an offense in the half court and make shots at a high percentage while posting up on other guards. Miller already has scored over 15,000 points and dished over 8,000 assists over his entire career. The latter stat puts him in the Top 10 for career assists.

In Denver, Miller fell out of favor after a disagreement with head coach Brian Shaw. That may have been a concern on the surface because the Wizards certainly did not want a headcase in the locker room, but according to Nate Timmons of SB Nation's Denver Stiffs, the fact that he was playing on a playoff-bound team would override that.

Miller filled the backup point guard role decently, but he wasn't spectacular. He took care of the basketball, set up his teammates well and made a a good percentage of the shots he took. The latter stat could be a bit misleading, because his field goal percentage of baskets at the rim was below average. Here's his shot chart below for the 28 games he played as a Wizard: 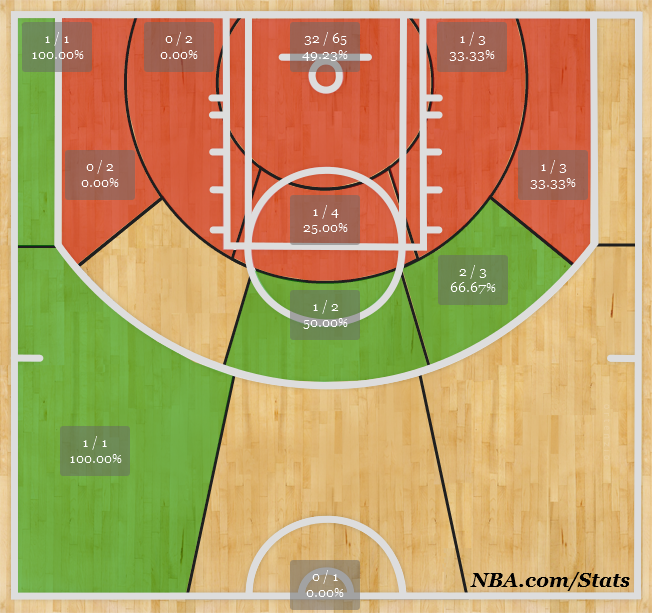 At the same time, most of the shots Miller took were close to the basket, atypical of most NBA guards. He didn't take many mid range or three point shots at all. Still, he played very well with Al Harrington and Drew Gooden, the other members in the "AARP Unit."

Miller made some great passes as well, most notably this full court pass to Bradley Beal:

During the playoffs, Miller had inconsistent playing time and results. Here are his game logs:

The worst moment Miller had in the Playoffs was during Game 1 of the Pacers series, when Indy went on a big run in the second quarter, almost from the moment when he stepped on the floor. He only played eight minutes in that game, even though they won. Maybe it was "stage fright" from playing in the first second round playoff series of his career?

Miller is under contract for the 2014-15 season for $4.6 million and it's likely the Wizards keep him, but they can buy him out for $2 million before June 30. Should he be traded or bought out before next season, the Wizards will miss someone who can orchestrate a half-court offense without being turnover prone. They'll also miss someone who finds crafty ways to score buckets with his post game and was a nice mentor to Wall.

Miller came to Washington to fill in a major role while playing off the bench, and he filled it adequately. He is now 38 years old, so he is definitely closer to the end of his career. Though Miller could still be an option as the backup point guard for 2014-15, the Wizards will eventually need a younger, yet effective player to fill that role in the future.