Many shrugged it off as a lousy 10-day signing, but the addition of Drew Gooden proved to be an important move for the Wizards' success as they made their playoff push.

Never has a 10-day contract sparked so much contempt among a fan base as Drew Gooden's back in late February. You all know the story by now: Gooden infamously spurned Washington back in 2010 after being dealt from Dallas in the Caron Butler deal. He refused to play, attempted to negotiate a buyout before finally getting flipped four days later in a trade that sent him to the Los Angeles Clippers.

But that's water under the bridge now. He, along with Andre Miller and Al Harrington, spearheaded a revamped second unit that simply trounced their opponents. They manufactured elite floor spacing and relied on outscoring their opponents. Per NBA.com's stats page, their net rating of 11.2 points per 100 possessions was the best out of any lineup that played over 100 minutes in the regular season.

There were none. He was supposed to play sparingly, and at the time was thought of as an insurance plan in case anything happened to Trevor Booker and Kevin Seraphin. This was their time to shine, and it was the perfect opportunity for the franchise to get one last look at them before the offseason, when they have to make a decision on their future.

Seraphin, who was also injured along with Nene in that disastrous February 23rd game in Cleveland, sat out the next seven games. Once he was ready, Wittman continued to sit him on the bench, while Booker starred in Nene's absence as the starting 4. Gooden meanwhile was rewarded a second 10-day contract, and eventually was picked up for the remainder of the season.

It couldn't have worked out any better for Drew. He found his niche with the AARP unit, and his activity on the glass -- he was tied with Gortat in total rebounding percentage for tops on the team -- permitted Randy Wittman to use him in crunch-time lineups as an extra floor spacer. 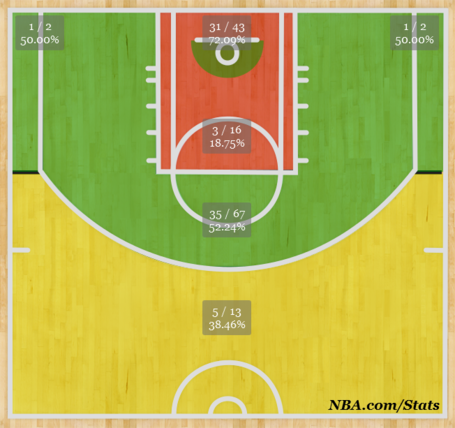 Forcing the defense to account for that extra shooter was instrumental in opening up Bradley Beal's floor game. He no longer had a congested lane to deal with, and Gooden's ability to occasionally hit the three was enough to keep defenders honest. He shredded the Brooklyn Nets to the tune of 21 points and nine rebounds on 8-11 shooting in their pivotal home win back on March 15. Then followed that up by dropping a cool 18 points in back-to-back games on the road as well.

And you can't say enough about his rebounding either: he's at the top of every major statistical category when it comes to crashing the glass. He was second in both offensive and defensive rebounding percentage on the team, and as mentioned earlier, he tied with Gortat as the team leader in total rebounding percentage. It speaks volumes to his work ethic all year long (as well as those vigorous Bikram Yoga sessions) that he was able to provide so much relief on the boards.

But however good he was on the boards, he was equally as bad on defense. He made some highlight reel blocks coming in from the weak side in the playoffs, but overall was a complete sieve on that end. He had a lot of trouble getting in position on defense, often struggling to commit himself to showing on the pick and roll and staying within reason to his man. He took poor angles in walling off ball handlers, which resulted in a ton of drives zipping by him as well, which put a lot of pressure on the guards to fight over those screens.

He played just spot minutes in the Chicago series as Wittman decided to go with the hot hand of Trevor Booker, who absolutely killed Chicago on the glass.

But Wittman finally conceded to stretch the floor out against Indiana, and in Game 1, it paid off. Gooden was extremely productive, scoring 12 points and pulling down 13 rebounds in just 17 minutes of play. However, he could never match those totals again in the series, as Indiana took control of the paint with their size. Gooden was relegated to crashing the glass from the weak side and spotting up around pick and rolls, which Indy happily gave up in order to bottle up any drives to the basket.

Gooden and Nene both hit dry spells at the worst time possible, and Washington's offense wilted the rest of the way.

His shooting is replaceable for sure, and the Wizards will have to be wary of committing to him for yet another season given his age. He's not exactly the most durable player out there, and although he looked just fine in this half season, they have to stay cognizant in acknowledging that it was just half a season of work.

But the shooting and rebounding was huge. If the Wizards decide not to re-up him, they'll have to find a big man that can do both. He was terrific for that locker room and really changed his perception with the fan base with his upbeat attitude.

I don't know what more Drew could have done. I admittedly wasn't a fan and thought this was just another lazy signing that was carried through the front offices' relationship with his agent Dan Fegan. But he really turned heads around the league and could quite possibly have extended his career another two years.