The fourth-year man from Clemson emerged as a viable rotation big man this season after two injury-plagued years, but did he do enough to prove that he should be re-signed?

We'll be evaluating each Wizards player, as well as coach Randy Wittman, over the next couple weeks. Previously: Bradley Beal | Trevor Ariza.

Trevor Booker stayed healthy for once in 2013-14, and what resulted was the kind of season he put together in shorter stretches earlier in his career. The fourth-year man from Clemson proved to be a useful rotation player, fighting through his physical limitations to make a nice contribution. The season ended on a down note, though, as he barely played in the team's six-game series loss to the Indiana Pacers.

What were our preseason expectations?

Booker was lumped in with fellow draft disappointments Chris Singleton, Kevin Seraphin and Jan Vesely. Not much was expected of them, to the point where the Wizards surrendered a first-round pick once Emeka Okafor got hurt to find a viable starting big man in Marcin Gortat. In fact, early in the season, it was Vesely that got the backup big man minutes, not Booker.

Perhaps this skepticism was misplaced on our part. Booker had always been useful when healthy, but just couldn't stay on the damn court. He played in just 98 combined games in his second and third season, and that has a way of derailing any positive momentum one gains when out there. Injuries can be chronic, or they can be flukes. We counted on them being chronic, which explains the lack of enthusiasm for his development.

It's hard to complain about how this season went given how little was expected of him during the season. Booker eventually took the backup big man position from Vesely and never let go. When Nene got hurt and had to be put on a minutes restriction, Booker stepped into the starting lineup. Any struggles he experienced there were no fault of his own, per se. Teams just didn't respect him like they respected Nene, and the team often suffered.

But we also couldn't expect Booker to transform overnight. He made meaningful strides on both ends, growing to the point where teams had to at least respect his game a little more than before. He improved his perimeter shooting, hitting over 41 percent of his mid-range shots after nailing just 36 percent a year before. 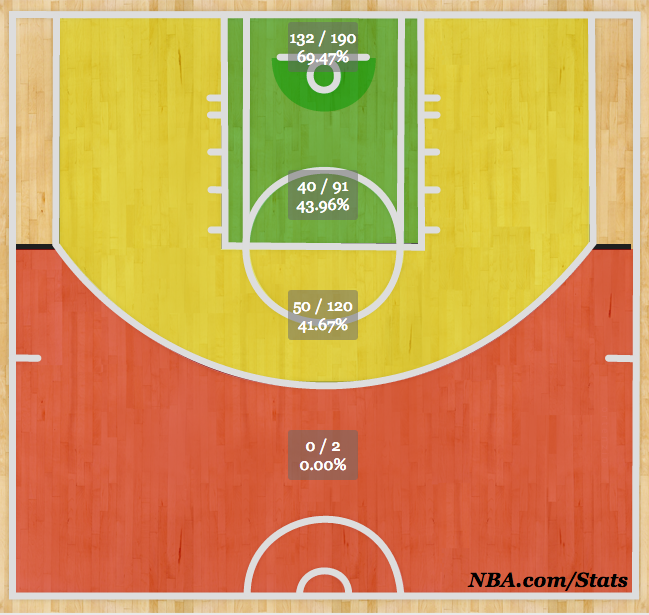 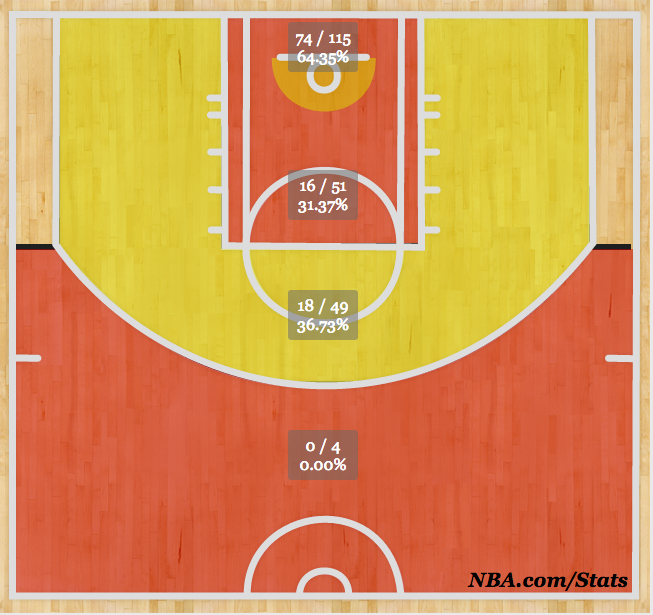 He also showed a willingness to go into the post and make plays. He has a nice jump hook going left and displayed nice patience getting to his spot. Post-ups made up nearly 18 percent of his offense, and he scored a very respectable 0.9 points per possession on said plays, per Synergy Sports Technology. Nobody would said he's a go-to guy down there, but there were times when his ability to generate a decent look down low helped alleviate Washington's spacing problems.

But teams still didn't respect Booker as much as the Wizards often needed them to do so, and that hurt Washington's other options. At least Nene was a capable mid-range shooter, post-up threat and passer. Booker will need to make yet another jump to get to that point.

Of course, Booker's best quality is his offensive rebounding. His individual numbers were slightly down this season, but he nevertheless filled a major void for a Wizards team that doesn't generally crash the offensive boards well. Per NBA.com's stats page, the Wizards grabbed 27.5 percent of their misses with Booker in the game, compared to just 23.7 percent with him off. Part of the discrepancy is due to strategy -- Nene is a slower big, so the Wizards preferred to focus on transition defense when he played -- and Trevor's aggressiveness did sometimes lead to poor floor balance, but I think it helped the Wizards more than it hurt them on balance.

The problem is that Booker is still a poor defender. He made some strides in his pick and roll coverages, but he still too often got lost trying to jump out too high. He's willing to bang with bigger players inside, but he still gives up too much size. This is the biggest reason why he didn't play much in the Pacers' series. Washington was over seven points worse defensively with Booker in the game this season, per NBA.com's stats page. Some of that is because Booker often replaced Nene, a superlative defender, but some of that revolves around Booker's own shortcomings.

Booker was slated to lose minutes anyway given Nene's return, but he was still a big help in the Bulls' series. He was the only Wizard remotely capable of banging with Taj Gibson, and his ability to generate second shots on the offensive glass was a huge key in the Wizards' quest to pierce Chicago's air-tight defense. He stepped up when Nene was suspended for Game 4, grabbing nine rebounds and scoring eight points before fouling out.

But he did not play much in the Pacers' series, as Randy Wittman elected to use Drew Gooden as the primary backup big man. While it's unfortunate that Booker's solid play against Chicago wasn't rewarded, I understand Wittman's call. The Wizards wanted to use Gooden's shooting to stretch Indiana's defense, and Booker's lack of size would have been more of a problem against Roy Hibbert, Ian Mahinmi and David West than against Joakim Noah and Gibson. As usual, Booker did nothing wrong; he was just too limited a player to use in that matchup.

The offensive rebounding. The Wizards don't have another player that can generate second opportunities as well as Booker. Gortat has become good at tipping the ball out, but he isn't great at actually grabbing the ball and going right back up with it. This is Booker's biggest strength and it will be missed if he departs as a restricted free agent.

That said, if Booker leaves, the hope is that the Wizards can find a player that is stronger in areas Booker was weak, most notably perimeter shooting and pick and roll defense.

I didn't expect Booker to play as well as he did this season, so he gets a solid grade based on a curve. That said, I don't see a reasonable avenue for significant improvement unless he becomes a lights-out mid-range shooter. My recommendation would be to look elsewhere for a backup big man this summer unless the Wizards get priced out of better options.