Playoff Pixels, Wizards vs. Bulls (Game 5): HOW 'BOUT THEM WIZARDS?!?!

We've been expecting this for a week or so now, but wow, they actually did it. The Wizards (THE WIZARDS!!!) won a playoff series. Bring on the second round. WOOO!!

Share All sharing options for: Playoff Pixels, Wizards vs. Bulls (Game 5): HOW 'BOUT THEM WIZARDS?!?!

That was an ugly way to clinch, Wizards, but we'll take it, right guys?

Washington took care of business in its first chance to advance to the second round, defeating the Bulls in Chicago, 75-69, with the Big Three leading the way. John Wall scored a game-high 24 points (7-of-19 shooting, 9-of-11 FTs) to go with seven rebounds and four assists. Back from his one-game suspension, Nene resumed his domination, scoring 20 points on 10-of-17 shooting, and grabbing seven boards. Bradley Beal chipped in 17 points, five rebounds and four assists.

Marcin Gortat only scored two points on 1-of-5 shooting, but he hauled in a team-high 13 rebounds, including three-straight offensive boards within a one-minute span at the end of the game to help seal the series for the Wizards. After leading the team with 30 points in Game 4, Trevor Ariza had a more subdued Game 5 with only six points, but he tallied nine rebounds and continued his suffocating defense. Trevor Booker remained huge off the bench, scoring six points to go with seven rebounds and boundless energy that had Steve Kerr declaring CookBook his "new favorite player" in the NBA.

The game was as scrappy as one would expect from an elimination game, and on a night when they shot only 40.5 percent as a team, the Wizards relied on their defense holding the Bulls to 33 percent shooting. Washington also won all the hustle stats (see below).

But yeah, WE'RE GOING TO THE SECOND ROUND!! Bring on the Pacers or Hawks (but seriously, LET'S GO HAWKS!!).

6 - Offensive rebounds collected by the Wizards in the final two minutes of the game, including three straight by Gortat that gave Washington a minute-long possession beginning at the 1:58 mark. Coincidentally, the Wizards also outrebounded the Bulls by six (49-to-43) for the game.

11 - Washington's advantage in fast break points (13-to-2) against Chicago.

John Wall 4, Colin Cowherd 1. Onto the next one.

The @WashWizards are heading to the second round. A new power is emerging in the nation's capital. #HouseOfGuards pic.twitter.com/2U3aE6h4gY

Congrats !!!! On to the next round #dcRising

Every ESPN expert that predicted the #Wizards to lose to the #Bulls in this series BE LIKE... pic.twitter.com/ldYoPyST3V

I charted Wizards box scores on notebook paper in my room as a kid. So much Courtney Alexander and Jahidi White. Tonight is a great night.

Special congratulations to Andre Miller. 15 seasons and he’s finally in the second round.

Man, complete strangers were HUGGING each other at the #WizardsTwitter watch party. This city has missed winning basketball.

Few playoff joys grander than the screencap of an ESPN predictions page showing you how poor of a prognosticator you are. Congrats, Wiz!

Wall: We trust each other as a family, and that's the reason we're playing good basketball right now. #WizBulls #dcRising

.@kanyewest You shoulda never, ever made catchy raps dissin' the Wizards.

DC get ready for second round!!

Doesn't get any better than this. 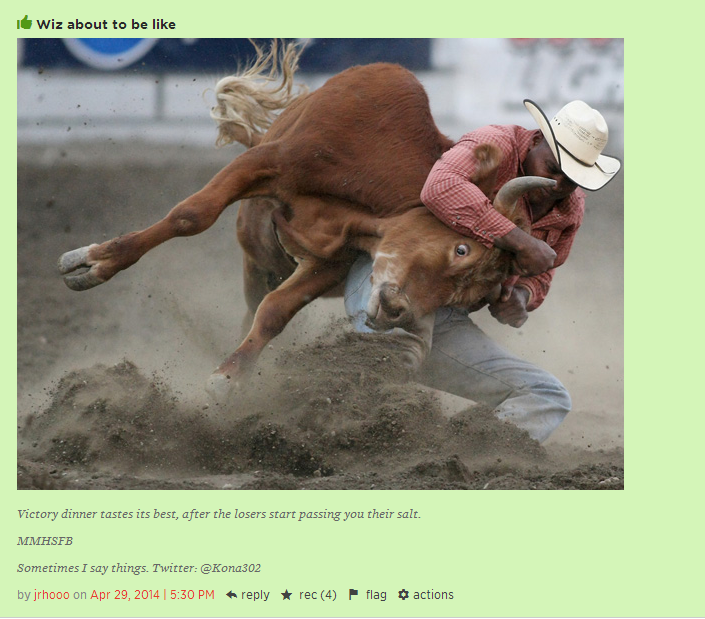 SECOND HALF GAMETHREAD COMMENT(S) OF THE NIGHT

Should we accept bandwagoners?

As long as they support our team I don't care

The idea that our Wizards could have bandwagoners will take a while to sink in lol.

Wizards in the Second round

"It's OK for the Bullets to trade baskets, as long as they can score on their end." -- Words of wisdom from Phil Chenier 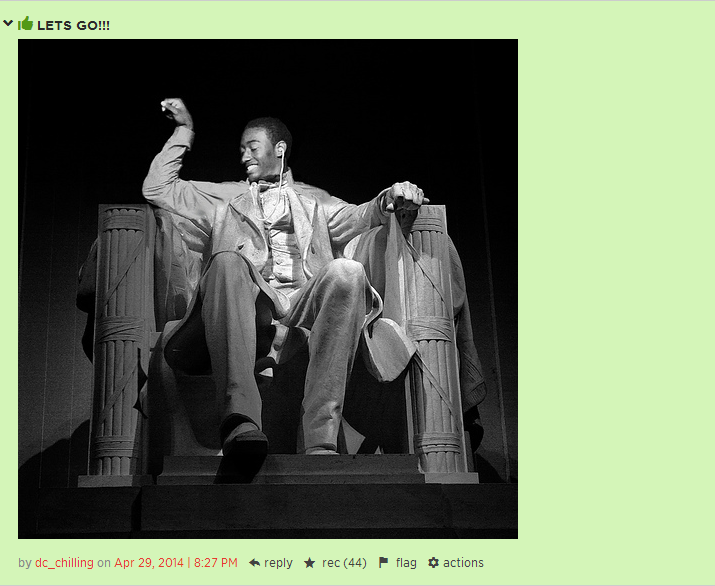