Playoff Pixels, Wizards vs. Bulls (Game 4): Stepping up without Nene

After losing a tight Game 3 and without a suspended Nene in Game 4, the Wizards seemed almost fated to a 2-2 series tie with the Bulls. But in #NotSoWizards fashion, Washington reestablished control of the series with a convincing 98-89 win, its first home playoff victory of the John Wall era.

Share All sharing options for: Playoff Pixels, Wizards vs. Bulls (Game 4): Stepping up without Nene

Take a quick glance at the box scores from Games 3 and 4, and it becomes clear pretty quickly why the Wizards lost the former and won the latter.

Turns out, not letting Mike Dunleavy score 35 points was a good strategy for the Zards. It also helped that Tom Thibodeau let Taj Gibson, far and away his best player in Game 4, languish on the bench for eight minutes to begin the second half.

There was so much to love about this game: Trevor Ariza's team-high 30 points, Bradley Beal's defense on Mike Dunleavy, John Wall's mature floor game, Ted's sporting a Nene jersey, the list goes on. Ariza shot 6-of-10 from three and also collected eight rebounds. Beal scored 18 points, but more importantly led the effort to hold Dunleavy to six points on 3-of-8 shooting. Wall shot only 4-of-15, but complimented his 15 points with 10 assists, committed only two turnovers, and helped limit D.J. Augustin and Kirk Hinrich to a combined 15 points on 6-of-22 shooting.

Trevor Booker didn't light the world ablaze, but he capably filled in for Nene, grabbing a team-high nine boards to go with eight points and three blocks in 28 minutes. Marcin Gortat struggled from the field (6-of-18), but finished with a solid 17 points, six rebounds and five assists. Andre Miller didn't make a dent on the box score, but he made a big play by getting the ball to Martell Webster (eight points) with Augustin guarding him, forcing the Bulls' most-consistent offensive threat to pick up his second foul less than a minute into the second quarter.

Gibson was the only Bull that really went loose on the Wiz, scoring a game-high 32 points on 13-of-16 shooting, and yet he only played the fourth-most minutes on the team. Thanks, Thibs?

Up 3-1 and looking every bit as superior as such a lead suggests, the Wizards have a great chance to wrap this one up in Chicago with Nene back for Game 5. Let's get it done!

29 - Points scored by the Wizards off of 16 turnovers by the Bulls.

22:6 - Washington's assists:turnovers against the Bulls.

Wall to Beal in the corner for a swish. NBA teams should get used to that for the next decade or so

NOBODY PUTS ARIZA IN THE CORNER, EXCEPT FOR BRADLEY BEAL ON THAT PERFECT PASS.

What do the Bulls look like without Taj Gibson today? Well, I'm glad you asked. #SeeRed pic.twitter.com/iw7rt0PB6i

Trevor Ariza with a huge half for @WashWizards , connecting from all over the floor pic.twitter.com/gKxNAfHd4b

All of the Bulls’ passing lanes are controlled by the Wizards

The season is on the line and you wait nearly eight minutes to put the only guy doing damage in the game. Strange.

I'm going to put up Trevor Arizas shot chart on my wall like it's the famous Tyra Banks S.I. Swimsuit edition #WizBulls

Photo of the day: pic.twitter.com/ipOaJ9mhgD

Wizards 82-62 after three. Bulls appeal to league to reduce Nene suspension by a quarter

87 points on 78 possessions for Wizards. Well over a point per possession again. Biggest surprise of playoffs is how easily they've scored

Beal with 5, rest of Wiz scoreless for 5:30 in 4th so far. Will Bulls annoy us by climbing back into game sorta but not enough?

Gortat is so happy pic.twitter.com/1gUtlD7Jpl

Game? Over. Series? Also over. Goodnight.

Whoa. Crowd is seriously in a "FREE NENE" chant as Queen plays in the background. This is like a dream of mine or something.

Ted Leonsis saw himself on big screen. Raised hands, turned & pointed to back of his jersey, which read, Nene. "Free Nene" chants! #wizards

"I'm going to talk to him about making those two foot shots. (Smiles) No really, Marcin has played hard." -Wittman on Gortats performance

"His speed and his intensity. And Beal and Ariza are so athletic. John and Bradley have really grown. Hard to guard" -Thibodeau on Wall+Wiz

"They didn't have Nene. And they came out even harder." -Gibson on Game 4

Such a great setting-Wall & Beal looking fresh in front of the #NBAPlayoffs backdrop. @JoeGlo1 w/ the snap, of course pic.twitter.com/y2BmPkE4D0

SECOND HALF GAMETHREAD COMMENT(S) OF THE NIGHT

stay focused, DO NOT LET UP!

"Critics are men who watch a battle from a high place then come down and shoot the survivors."

Boozer WANTS NOTHING OF GORTAT......

"Critics are men who watch a battle from a high place then come down and shoot the survivors."

So, Joakim Noah, you say it sucks for us Nene was suspended for Game 4. Interesting! 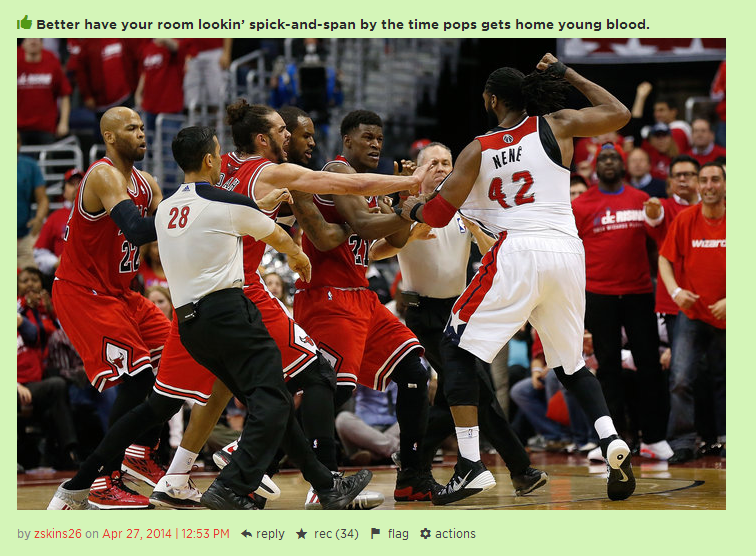