NBA Playoffs 2014: Why Wizards-Bulls isn't over just yet

Yes, the Wizards lead 2-0 and are coming home, but that doesn't mean you should be popping the champagne just yet. There are still two more games to be won.

Share All sharing options for: NBA Playoffs 2014: Why Wizards-Bulls isn't over just yet

Okay, so here's the good news: the Wizards lead the Bulls in their seven-game series, 2-0. They've overwhelmed their opponents so completely at times that many around the league are preparing Chicago's funeral. Not long after the first tip, it became clear which team was more talented, and it wasn't the one using Tony Snell.

But a friendly reminder: this series isn't over. The Bulls might have their collective back against the ropes, searching for one last energy burst in a season defined by them, but they're not done yet. That's just not how it works in a seven-game series, not when guys this good have this much to lose.

Charles Barkley might think the Wizards got this, and they probably do, but favorable odds are just that. With at least two more games to play, there's a whole lot that could happen to throw this series into chaos. So maybe we can start shopping for that first-round champagne (first-round Fresca?), but here are a few reasons to hold off on the celebration for at least one more game:

Game 3 will be tough

The Wizards are up 2-0 heading back into the waiting arms of D.C. That's dope. It's probably the best reason to believe the team will win, frankly.

It's also the biggest reason to believe the Wizards will probably lose Game 3. At least according to history.

According to WhoWins.com, which tracks the results of every seven-game series in the league, NBA teams have gone 108-147 in Game 3s when leading 2-0. There's an explanation for that -- when higher seeded teams go up 2-0, they're forced to play on the road in Game 3 -- but it doesn't apply as the Wizards return to Verizon Center.

Teams returning home up 2-0 have gone 12-7 in Game 3s, but that record drops to 0-2 for first-round matchups. In other words, only two lower-seeded teams have ever gone up 2-0 in a seven-game, first-round NBA series. They both lost Game 3.

So it's something to be mildly concerned about. Last time the Bulls played in D.C., they crushed the Nene-less Wizards. It will be important not to let anything like that happen this time around.

The Bulls don't get swept

Chicago has been a remarkably successful regular season team under Tom Thibodeau, something that's continued the past two years without Derrick Rose. Winning in the playoffs hasn't been so easy, but that's not to say the Bulls become pushovers once the real games begin.

Since the Bulls hired Thibs in 2011, they've played six postseason series. They've won at least one game in every one, even taking Game 1 against the Heat last postseason before succumbing to the eventual champions. I'm not saying Chicago is an unstoppable force, of course they aren't. I am suggesting that this is a tough team to sweep.

They're relentless, they're structured and they have leadership. They might not be as talented as the Wizards, but at some point, don't be surprised if that gets Chicago at least one win in this series. Don't forget how close Game 2 was, after all.

The Wizards and big games

The first two games of this series were huge, two of the biggest wins we've ever seen from John Wall and company. There's a reason why they felt so special, though: this group doesn't have a track record of consistently stepping up under the limelight.

While Washington has been rolling lately, winning 10-of-13 including the two in Chicago, who wants to list all of the frustrating Verizon Center performances that this team delivered in 2013-14?

In back-to-back games in December, this team lost in OT to Milwaukee then scored 74 points in a loss to Denver. They've lost at home to Philadelphia, Boston, Detroit and Cleveland -- honestly, how many great teams do that? And how can we forget those brutal, late-season losses to Charlotte, in games that were considered borderline must-wins at the time?

We've seen the Wizards step up so far in the playoffs, but they don't have a track record of doing this. It'll take a bit longer before we're all believers.

If anything could torpedo this series for the Wizards, it's the one thing that could destroy any team: a major injury to a key player. As we've seen with the return of Nene, having a complete, mostly healthy roster can sometimes be the most important thing during the playoffs. Let's cross our fingers that it stays that way.

Should the Wizards lose one of their key guys -- Wall, Beal, Ariza, Nene, Gortat -- for a lengthy period of time, don't be surprised if the Bulls pounce on the opportunity to punch back. This is obviously the worst-case scenario, but seriously, we're playing Chicago. Go ask any Bulls fan about major injuries during the postseason.

Imagine this series if this guy was in it: 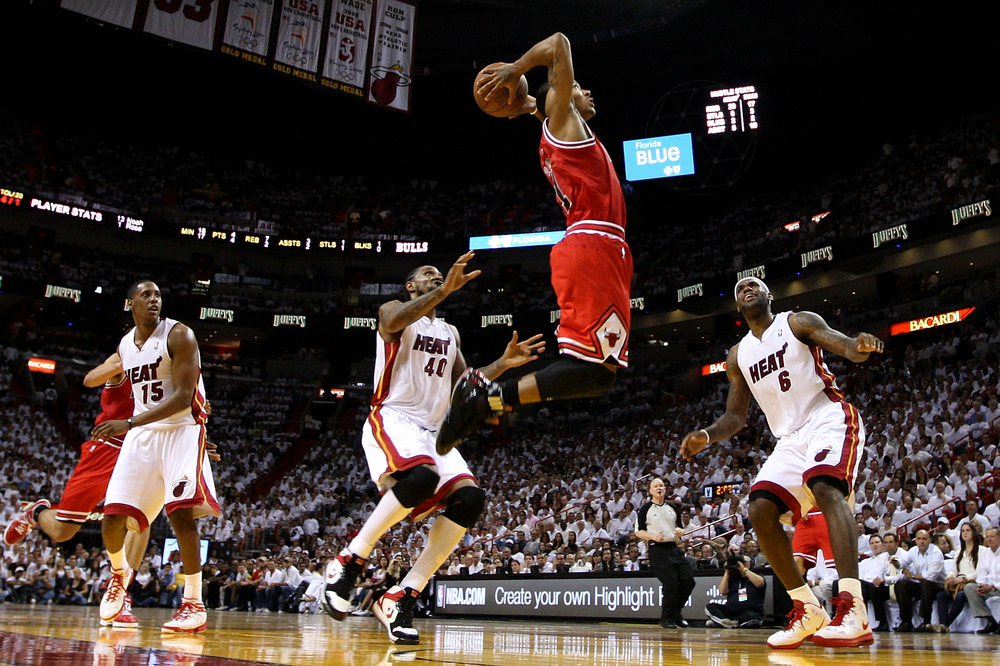 Okay, now back to the good news

Being up 2-0 is obviously a great thing, though. Ted might want us to temper our excitement -- something I can't necessarily disagree with -- but looking at history, the Bulls have quite the hill to climb.

239 of them ended up winning. That's a 93.7 percent success rate. The odds are seriously in our favor.

But that still leaves a 6.3 percent chance that the Wizards lose. And frankly, given the history of these two teams, it's probably fair to say it's higher than that.

Things are looking good, though. Let's just cool the jets until we're ready to actually take off.