Breakfast Bullet-in: Wait, the Wizards are up 2-0 on Chicago?

This morning's Breakfast Bullet-in comes with a nice side of WINNING PLAYOFF GAMES ON THE ROAD.

Share All sharing options for: Breakfast Bullet-in: Wait, the Wizards are up 2-0 on Chicago?

The Wizards are up 2-0 on the Bulls with the series heading back to D.C. later this week, as you've probably heard by now. Basketball in the nation's capital is finally starting to get some respect, and it's for good reason, too. Folks realize this team isn't messing around anymore.

Seriously, we're on the cover of ESPN! 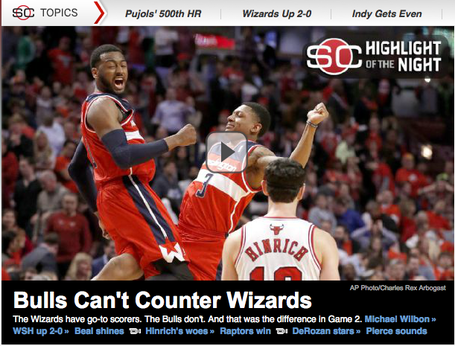 When's the last time you saw that happen? Probably when the team drafted Wall, frankly. But they're finally arriving on the big stage this month, and they're doing it in style. I personally grew up in Chicago, where everyone cared about basketball all the time in Jordan's wake, but over the past week or so, there's been a new energy to the fans of this team and this city.

It's been awesome to watch, and hopefully we can do this a few more times:

Gotta give a few more props to Trevor Ariza, who was not named Defensive Player of the Year yesterday but was probably the best defender on the court. As Mike broke down this morning, Ariza was simply dominant on D.J. Augustin in the waning moments of regulation on Tuesday, stopping really the only guy that had done damage all night.

Folks around these parts already know what kind of defender Ariza can be, but the national audience got a taste last night, and it was oh so delicious. Many teams will do a better job of handling Washington's quick-paced wing rotations better, but for now, Chicago looks to be having some major issues.

We knew adjustments would be big coming into Game 2 ... expect Tom Thibodeau to have some even bigger changes in mind as the games move to Verizon Center.