Seriously, is this real life??

Wait...wait a minute guys. Are we sure we saw what we thought we saw? Is it actually true? Did it really happen?

Headline says it all: pic.twitter.com/kDsYsvqkLi

Marcin is pretty speaking for all us right there, I think. Man oh man, how 'bout these Wizards? At least for today, they're the talk of the NBA, and maybe, if you use ESPN's front page as a barometer, all of sport.

Just an amazing game for this team. Down by 10 points with seven minutes to play on the road against a desperate Bulls team that ranked as one of the best defensive clubs in the league, how many of us started to look ahead to Game 3, satisfied the Wizards would return to D.C. having stolen homecourt and with the series tied at 1-1?

The Wizards certainly didn't, and ended the game on a 14-4 run thanks to nine straight points from Bradley Beal and some splendid defense by Trevor Ariza on D.J. Augustin.

Beal missed a potential game-winner at the end of regulation to send the game to overtime, where Nene quickly took over, scoring the first six points to give Washington the lead and generate the above GIF. Trevor Booker and John Wall each made a pair of clutch free throws to maintain the lead, but Wall got called for a bad offensive foul pushing off on the inbounds following a Joakim Noah layup, giving the ball back to Chicago with 39 seconds to play.

Hugging is OK. Pushing off is not OK. Is that right?

Four seconds later, Noah got fouled and sank both free throws. Beal followed it up with a miss on the other end, and the Bulls had the ball with 15 seconds to go and chance to tie or take the lead. Then, this happened.

Notice how Hinrich is already on his back by the time the whistle goes off? Don't worry, #WizardsTwitter noticed, as well.

hahaha what a awful call

Horrible call in that situation.

Where is the foul?

I generally hate people who complain about the refs, but are you fucking kidding me?

This crew is not distinguishing itself at either end tonight.

But then, for seemingly the first time all game, the Wizards got some well-earned luck, as Kirk Hinrich clanged the first free throw needed to keep the game alive for the Bulls.

A Hinrich maneuver must be like a reverse Heimlich maneuver. Because he choked, you see.

Apparently, the ball doesn't lie, folks. Hinrich intentionally missed the second free throw, but Wall corralled the rebound, and that was it. Ballgame, 2-0, rejoice.

This is what a 2-0 series lead over the #Bulls feels like. Breathe easy #WizardsTwitter https://t.co/E3Lsakvr2F

HOLY CRAP THEY DID IT.

Greatest win I've ever witnessed. I love this team

I don’t know how they won that game. Holy crap

Props to the Washington Wizards. Incredible.

For all news and traffic in Chicago, turn to WCFS 105.9 FM. #GetHomeSafe

THE WASHINGTON WIZARDS ARE UP 2-0 ON THE BULLS IN A PLAYOFF SERIES.

IM HUMPING THE AIR, THIS IS THE BEST FEELING IN THE WORLD!!!!

JUST WOKE UP THE WHOLE HOUSE, WILL NEVER USE LOWERCASE AGAIN

what just happened, i blacked out

Us too, Amin. Us too. I'm still hyperventilating.

Beal led the way in this one with a game-high 26 points and seven rebounds on 9-of-20 shooting, while Nene following up his dominant Game 1 with an solid 17 points (8-of-13 shooting) and seven boards in Game 2. Wall had a better game than his line (16 points on 6-of-15 shooting, seven assists, five turnovers) indicates, as he did a very good job running the offense down the stretch. He also keyed a critical run over the final minute of the first half, scoring seven points to push Washington's lead from 49-48 to 56-49 entering halftime.

Marcin Gortat struggled all game, scoring only seven points on 2-of-9 shooting, but Trevor Booker came up huge with nine points and eight rebounds off the bench. Trevor Ariza had a good all-around game with eight points, eight rebounds, seven assists, and most importantly, his defense on Augustin. And though Beal led the Wizards' fourth-quarter comeback, it was Martell Webster (10 points, 4-of-6 shooting) who got it started with perhaps the shot of the game, a three-pointer inside the seven-minute mark to cut the deficit to 87-80.

The Wizards were outrebounded 49-42 and shot only 57 percent (16-for-28) at the foul line, and still left Chicago up 2-0. We couldn't have asked for any more over the first two games. Great job. The Bulls are drowning, and now they have to win a game in D.C. to keep this series alive. Don't let them up for air.

3:53 - The last time the Bulls scored in regulation, on a Hinrich jumper that gave Chicago a 91-85 lead. Then Beal scored seven straight points to send the game to OT.

8:08 - The amount of time left in the fourth quarter when D.J. Augustin last scored. At that point, he'd scored a team-high 25 points on 10-of-18 shooting. Then Randy Wittman switched Trevor Ariza onto Augustin out of the under-six timeout, and Augustin only attempted three shots the rest of the game -- none in overtime -- and missed all three.

TWEETS OF THE NIGHT (there's a lot)

Just a reminder that in 1978, Bullets also went 44-38 and won their first two playoff games.

"Man,all that media fawning over the Bulls sure was stupid," -- Ethan Strauss, guy who picked Bulls in 5

The worst officiated game in the history of sports. 8 on 5 all game and #Wizards still won. #dcRising #WizKids

Your Wizards just took 2 games on the road in Chicago, and they're coming back to DC on Friday.

THANK YOU BRADLEY BEAL, I'M NAMING MY ALL KIDS AFTER YOU

Wizards up 2-0. Story of the playoffs so far.

Over the last five seasons, the Wizards were 117-277 and the laughingstock of the NBA. Now, they're up 2-0 in the playoffs. Incredible.

Seriously, though, what happened?

Can you believe THAT! @WashWizards hang on for sensational overtime win vs @chicagobulls to take commanding 2-0 lead!

"This team is growing up before our eyes, America"- Charles Barkley

I'm in. RT@SquidDad Getting Randy Wittman's face tattooed on my back

Turns out all the heart, grit and determination in the world just adds up to taking the L from Randy Wittman and his grumbleface

Randy Wittman is getting extended until the next millenium.

As of now no team is closer to the NBA title than the Washington Wizards. Is this real life???

Randy Wittman coached a great, great game tonight. Ariza on Augustin and Boker down the stretch were great moves. #WizardsTalk

I flatlined no less than 5 times.

Beal & Wall have taken a huge step forward. They're gonna be trouble in the East for years to come

Legler: "Pay attention to this Washington team because the more you watch them the more you realize they really don't have any weaknesses."

No shame in it- we don't need to know your real name. It's okay- come on in.... pic.twitter.com/ZIFXoVxBaP

Tonight, Bradley Beal became the 10th player in NBA history to score 25 points in a playoff game before turning 21. http://t.co/PHLmNRtdYQ

Also, I'll say this. Bandwagon crap aside, there is a cadre of Wizards bloggers that committed to this team for no reason. Years ago.

I don't even know what to do. I am wandering around my neighborhood in flip flops. I'm dead ass serious too.

If Miami is to three-peat, it will have to figure out how to get through the Wizards

Great win for us!!! Nene was unstoppable again!!!! I have to play better ... Glad TBook got my back!

Wiz nation!!! Come to the game on Friday and Sunday and help us win those games!

FIRST HALF GAMETHREAD COMMENT(S) OF THE NIGHT 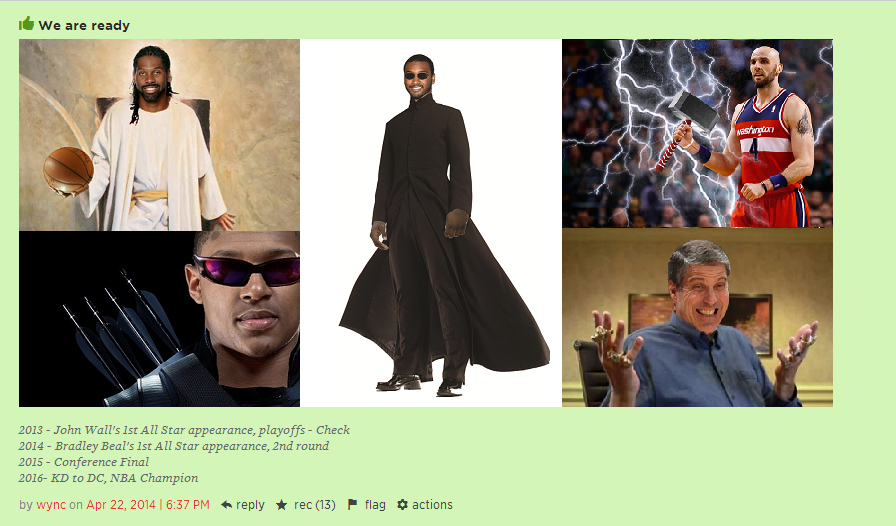 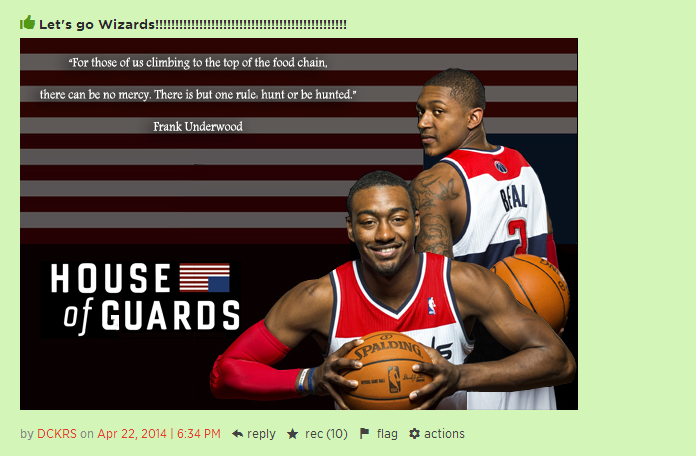 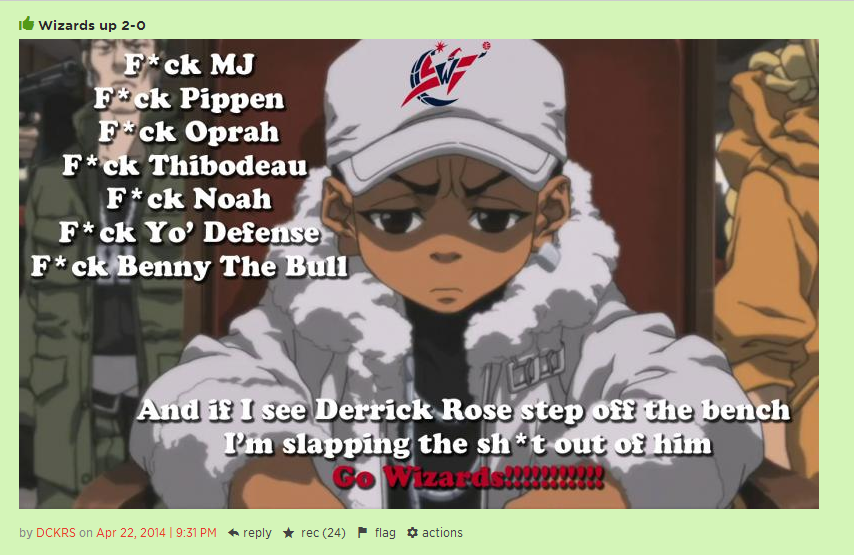