Wizards vs. Bulls, Game 2: What adjustments could we see?

Will we see major changes from Tom Thibodeau's squad? Here's what we think after watching the film.

Share All sharing options for: Wizards vs. Bulls, Game 2: What adjustments could we see?

A lot of folks have been wondering whether Tom Thibodeau will switch anything up after the Wizards stormed into the United Center and stole Game 1 from the Bulls. I have no direct insight to Chicago's gameplan, so this is merely educated speculatin'. But after watching the film of Game 1 (and tweeting about it incessantly, sorry to everyone's timelines), here are six things I'd look for tonight:

1. How much extra pressure will the Bulls put on Nene?

Those expecting to see wholesale changes in the Bulls' defensive approach will probably be mistaken. That's not Thibodeau's style, for one. Overreacting to one game, even in the postseason, is very dangerous. The Bulls are not suddenly going to aggressively trap pick and rolls, roll with junk defensive schemes that leave guys open on purpose and swarm the middle of the floor after not doing that all season. You cannot ask your players to do that when you've drilled them one way all year. More importantly, Thibodeau knows that if he makes too many changes to contain Nene, it opens up the very threats his defense was initially designed to contain: John Wall attacking the rim and open three-point shooters. I suspect he'll keep the plan generally the same and dare the Wizards to beat the Bulls the same way again.

That said, it would not surprise me to see a slight change in Joakim Noah's positioning. Noah, as he's done all year, spent most of the game "two nineing," which is NBA jargon for not covering his man and instead clogging up passing, cutting and driving lanes in the paint. (It's called "two nine" because in theory that's the maximum amount of time someone can stand in the paint without guarding anyone. In theory). This is the screenshot that best illustrates what Noah was doing at times during the game.

I'd expect Noah to be a little higher tonight. As we noted before the series, Nene is the team's best mid-range shooter. The Bulls will still take him shooting over Wall driving or Trevor Ariza, Bradley Beal and Martell Webster raining it in from the corner, but they'll at least contest it more.

The good news? If Noah comes up too high, Nene has the capability of driving around him and drawing fouls.

2. Will Chicago keep covering the shooters?

This, of course, is the tradeoff the Bulls made. As expected, they stayed at home on Washington's shooters and aggressively ran them off the three-point line when there was a threat that a shot would be released. Chicago often didn't care if the Wizards shot-faked and stepped in for the two-point jumper; as long as it wasn't a three, they were fine with it. This is the same strategy the Spurs used to famously use to subdue the Seven Seconds Or Less Suns. I'd expect that to continue, because frankly, it worked.

But will the Bulls use wing players to help stifle Nene in the high post? Again, I wouldn't expect wholesale changes, but you might see Bulls wings be more aggressive in "stunting" to the middle. This is when a wing player jabs hard at the big man popping to the high post to make him think he's coming, then retreats to his man, often by occupying the passing lane. If properly executed, this slows down the big man's rhythm and disrupts the play. If improperly executed, it opens up a three-point shooter.

This is a great example of the strategy from Game 1.

Granted, that was on Marcin Gortat, not Nene, and it was on a play much lower on the court than Nene will often be standing. But we might see Jimmy Butler unleashed a little more in this capacity in Game 2.

3. Will the Wizards keep up the weakside misdirection?

One of the best parts of Randy Wittman's gameplan was how much he was able to occupy defenders on the opposite side while the main play was happening. This has been a problem with the Wizards all season, but not in Game 1. Washington did some clever things to make the Bulls pay for overloading one side.

One thing we saw often: flare screens from the big men on help defenders. Some examples:

The Wizards also decoyed a couple screens and timed cuts on the opposite side with the primary play. For example, watch Trevor Ariza fake a screen, the cut right to the hoop on this sideline out of bounds play.

As Umair wrote, the Wizards were great at cutting to the hoop late in the game as pressure release valves.

The Bulls will be more on the lookout for this stuff. Hopefully, it'll open up even more avenues on the primary plays.

4. How will the Bulls adjust to the Wizards' pressure defense?

The bigger Chicago adjustments will likely come offensively. Washington really pressured them with their wings, both on the ball and off it. They also fronted the post and really cut off Joakim Noah's passing lanes. Save for a couple breakdowns, John Wall did a a really good job making life tough for D.J. Augustin and Kirk Hinrich on ball screens, fighting over the top and recovering. I only counted a couple backdoor breakdowns all game.

Notice how Ariza is cutting off the simple wing pass on this play. The Wizards were doing this all game. 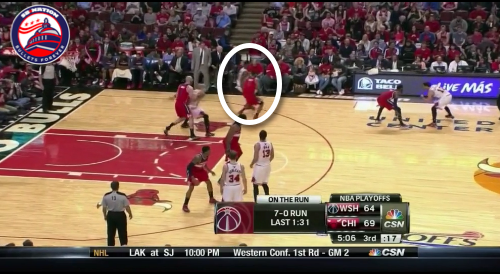 How will Chicago adjust to that? To be honest, I don't think they were especially well prepared for the Wizards' strategies. They didn't run enough misdirection on the opposite side, and when they did, they were successful. Players did cut backdoor, but not purposefully enough. Frankly, they did a bad job getting the ball to Noah in good spots in the high post. Some of that was Nene's defense, but some of that was also poor recognition. Look for Chicago to be more willing to cut backdoor and fight harder for positioning.

The other thing: the Wizards, as they often do, switched a lot of off-ball assignments on the baseline. Wall and Nene in particular are frequent switchers. They often do it to confuse the defense, but there's a fine line between that and confusing yourselves. As Doug Eberhardt wrote in his Wizards gameplan:

Have trouble with multiple screen situations on D. Screen/screener and motion pin down screens seem to confuse them.

This is because of the chronic switching. The Bulls were not prepared to take advantage of this in Game 1, but I suspect Thibodeau noticed it on film and will try in Game 2. That could come in the form of hunting mismatches, or it could come from slightly changing the ending of a play so that a different player pops open. The Wizards switch because they are anticipating a normal ending to the set. What if it's not a normal ending?

5. Is the Augustin/Noah pick and roll doomed?

This was the other reason why Nene was the key to the series. As expected, the Wizards locked up the Bulls' default late-game option. They angled off Augustin beautifully, forcing him into pockets where he couldn't pull up to shoot, then giving the guards a chance to recover. Meanwhile, Noah was never a rolling or popping threat. With that, Chicago's late-game offense was shut down.

How do the Bulls adjust? One way would be for Augustin to stop looking to score. This is his nature, sure, but it seems like he could have done a better job accepting the coverage and quickly moving the ball to Noah. That is, after all, the Bulls' best offense. I'd expect to see him be more willing to pass.

The other is by going away from the screen, something Chicago found a little success with down the stretch. Washington's pick and roll strategy calls for both the primary defender and the big man to meet Augustin on the other side of the screen. They want to squeeze him to an area and overload it so he can't make any plays. But at times, that left them vulnerable to Augustin or someone else declining the screen altogether and going to the rim. For example:

Butler was another player that used this strategy effectively. Expect that to continue.

As far as the pick and roll: it's easy to say Chicago should go away from it, but what other options do they have? This is part of the Bulls' problem, of course. Therefore, I'd expect to see the Augustin/Noah pick and roll in Game 2 again, but perhaps with some adjustments. The Wizards should be prepared for D.J. to look for Noah sooner as a high-post outlet.

6. Will we see any rotation changes?

Maybe. Save for a hot streak to start the third quarter, the Wizards kept Mike Dunleavy in check. Meanwhile, Tony Snell was very effective in that second quarter, then didn't play the rest of the game. Thibodeau hasn't used Snell enough all year, but maybe that'll change.

And then there's Carlos Boozer, who again sat out the fourth quarter. Boozer's defense stinks, no doubt, but he was an effective offensive player, getting by Gortat a couple times on poor closeouts and hitting some important jumpers. The Wizards' overloading defense took away Gibson's post ups, but struggled to deal with Boozer's in-between game. Will Thibodeau be more willing to go offense/defense with Boozer and Gibson down the stretch in Game 2? I think he should myself.