We're all predicting a long series, but with a couple exceptions, we're taking the good guys to upset the Chicago Bulls.

Share All sharing options for: NBA Playoffs 2014, Bulls vs. Wizards predictions: We're riding with our hearts

OK folks. It's time for some predictions. Here are the thoughts of the Bullets Forever crew.

MIKE PRADA: As usual, my head and heart disagree with each other.

Both agree that the Wizards can win this series. Chicago is a good matchup and struggles to put points on the board. Its defense is a huge challenge, but Washington solved it two out of the three times this year, both with Nene in.

But they disagree on whether the Wizards will win the series. My heart says the Wizards will absorb a Game 1 baptism to steal Game 2. Then, they'll return home to a wild home crowd and feed off their energy to win Game 3 and 4. From there, the Wizards only need to win one of the remaining three games to take the series. They can definitely do that. Let's say Wizards in 6.

My head agrees that the Wizards can steal one in Chicago, but then trouble awaits. My head doesn't quite trust this team to ride momentum properly, since it hasn't all season. My head doesn't trust this team to win tight games in key situations, since it's given away so many this year. So, my head thinks the Bulls swipe home-court back in excruciating fashion in one of those two games, then win their remaining home games to close out the series in 7.

Screw it. I'm going with my heart. Wizards in 6. 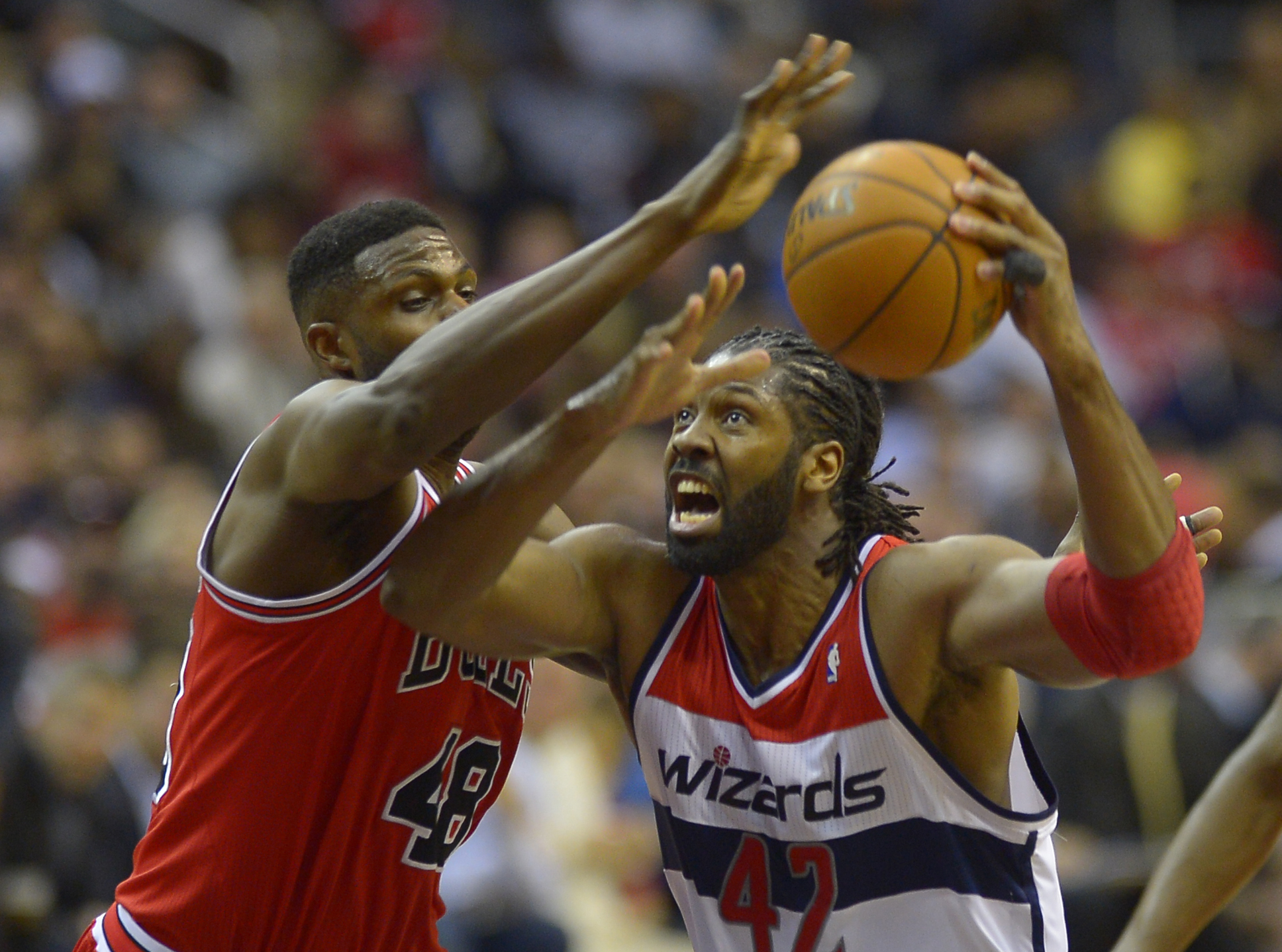 JAKE WHITACRE: Like many have said, I think Nene's presence will give Chicago some problems. If he was fully healthy, I think the Wizards would be able to pull this one out. But since that's not the case, I fear there's going to be a game where Nene ends up hurting more than he helps, and that ends up being the difference. Bulls in 7.

ALBERT LEE: Nene has given the Bulls problems in the post during the two wins that the Wizards had against them back in January. And even though the schedule for the Wizards was relatively "easy" towards the end, the Wizards also have been playing their best team ball at the right time even with Nene playing limited minutes. I don't think the Wizards are facing too much pressure in this playoff series compared with Chicago either, so they may be looser during these games. With a 22-19 record away from Verizon Center, playing on the road isn't a weakness. Wizards in 7.

Nene is the key

Why the Wizards need the Big Brazilian on top of his game to win the series.

This will be Wall's biggest test

Why the Wizards' All-Star must stay patient and not be baited into long jumpers by Chicago's sagging defense.

Nene is the key This will be Wall's biggest test

BULLET NATION IN EXILE: The starting backcourt has never been in a seven-game series before, so coaching will be absolutely critical. Can John Wall contribute big numbers without letting a smaller point guard go off? Fans seem far too comfortable talking up Wall as the best player in the series ... the only player in the Top 10 convo from either team this season has been Joakim Noah. The Wizards must burn it up from the outside all series long and pull Chicago's defenders out of the paint and be ready for a nasty grind. Wizards in 7 because I'm never picking against my team.

AMIN VAFA: The Bulls are probably the best-case scenario for the Wizards in the first round. They match up well, and the Bulls bring with them a spotlight that the Wizards can use to show the rest of the League Pass-less country how awesome they are (hopefully). The Bulls have a great defense, of course, and that defense will likely lull Wall and Beal into way more midrange jumpers than I will like. But as I see it, the Wizards have 3 things in their favor: Nene's back, they are masters of the corner three and they have John Wall. I pick Wizards in 7, because quick ain't fair.

UMAIR KHAN: It's hard not to look past the regular season, where Washington struggled against all those above-.500 teams, particularly ones that hang their bigs back like Chicago in pick and roll situations. Can Wall catch fire for an entire series? I'd love to think so, but even then, he'll need his shooters to step up and avoid another shooting slump.

Other questions persist. Will Randy Wittman going to make the right calls with the game on the line? Will he draw up one too many dribble handoffs for Beal with under two minutes to go, or will he get more creative out of timeouts? And just how many post ups is this team planning on running against a frontcourt of Taj Gibson and Noah?

I think Wall is on the cusp of something really great in the next two weeks. He's going to will this team to at least one win, and the return of Nene is certainly going to make a huge difference. But outside of that, I have my doubts. Chicago is battle tested, Tom Thibodeau is a maniac and he'll know exactly how to approach this Washington team. I hope to God I'm wrong, but Bulls in 6. 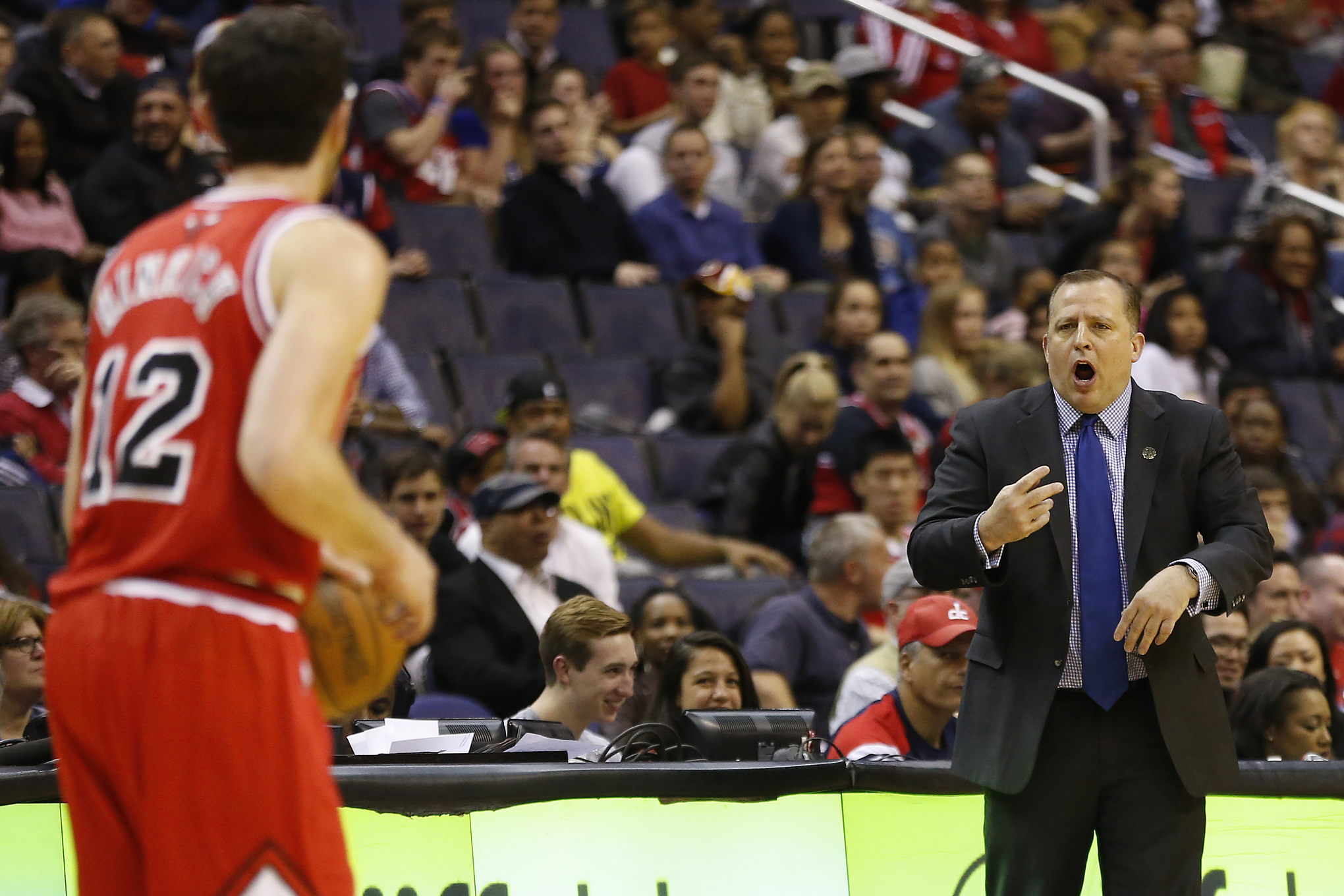 THOMAS PRUITT: As much as Wittman loves to ride his starters, Tom Thibodeau makes him look like Gregg Popovich in comparison. Chicago has played a lot of high-intensity basketball this season and I think this is going to catch up to them. Noah and Jimmy Butler in particular should be either at less than peak performance, or at least incapable of upping their intensity any further and Washington should be able to capitalize.

The matchups here favor Washington. The Bulls' defense is going to make difficult for Wall and I doubt he shoots over 35 percent for the series. At the same time, Augustin is the best scorer on the Bulls and Wall, due to his length and quickness, should be as well equipped as anyone to bother his jump shot and contain his dribble penetration. And if they get past Wall, Nene is back to make sure no one gets all the way to the basket.

Bradley Beal could have a huge series and I suspect he'll make up for a rough series from Wall. Chicago's defensive schemes encourage long twos and Beal has the stroke to get hot after a middling regular season. Butler is an excellent defender but after averaging almost 39 minutes per game this year, chasing Beal around screens could push him to his breaking point. Wizards in 6.

More from other sites

Wizards by the numbers

Our profile of Washington's first-round opponent.

More from other sites

Wizards by the numbers Bulls bring cliches to life

SATCHEL PRICE: The Bulls should pose the Wizards a lot of problems. They're relentless, never stray from the plan and have a track record of winning games despite adversity. On paper, you wouldn't be crazy to say Washington has better players at the moment. However, with an ailing Nene and the way Chicago fits guys into its structure, it's hard to say the Wizards take this series. The wild card will obviously be Nene's health, as he's really the one guy who can help combat everything Noah and Taj Gibson do around the post. But for all of the aforementioned reasons and Noah's seemingly eternal determination to put his team on top, I'm taking the Bulls in 6.

JEFF NEWMAN: The keys in this series for Washington are a) Nene's health and ability to play extensive, effective minutes, and b) John Wall's defense on Augustin. It's well known that the Bulls struggle to score, and Augustin has been their most reliable source of points. If Wall focuses on shutting him down -- and he can do it -- it suddenly takes a load of pressure off the Wizards at the offensive end. As for Nene, he needs to be able to draw double teams in the post and keep Noah and Gibson off the offensive glass. It remains to be seen whether he's spry enough to get the job done, but I'll just assume he is.

Also, everyone ratchets up their game and effort in the playoffs ... but the Bulls have already been dialed up to 11 since the All-Star break. How much harder can they really go? On the other hand, the Wizards, one would think, will be cranking it up consistently for the first time all season. We've seen the Wiz play at max effort on occasion, and that they're capable of beating top teams like the Heat, Thunder, Pacers, etc. when they do so. What happens if and when they suddenly do that consistently? What happens when Wall is suddenly motivated to show all of the NBA and a national audience what he's really capable of doing and isn't coasting through every third or fourth game against bad teams with lesser-known point guards?

If I had to bet cash, would I make this prediction? Probably not, but with most of the national media taking the Bulls in six, it'll be nice to reverse the script and have 'called it' beforehand. Wizards in six.