Wizards vs. Celtics final score: Washington cements a playoff spot in the East with 118-92 win

Washington finally broke through and secured a spot in the Eastern Conference playoffs with a 118-92 victory over the Boston Celtics.

Share All sharing options for: Wizards vs. Celtics final score: Washington cements a playoff spot in the East with 118-92 win

Finally, the Wizards looked like a team pissed off and concerned with just getting this one win to cement a playoff spot in the Eastern Conference. John Wall and Marcin Gortat were terrific in their three quarters of work, and the AARP unit did what they have done all season: spread the floor and make shots. Washington shot over 62 percent from the floor and 52 percent from three in their 118-92 route of the Boston Celtics.

It's been way too long since the last time the Wizards blew out an opponent, so I won't bother mentioning the lowly Celtics. This was the Wizards' get-well game. Boston never threatened to take the lead, and they comfortably breezed through this one.

Ever wondered what it would be like if teams consistently respected Trevor Ariza at the three-point line? After talking him up prior to the start of the game, Brad Stevens elected to do just that, and Washington countered by sending Gortat right down the middle of the lane out of the pick and roll. Wizards shot 9-12 from the field to start, building up a double-digit lead that they would largely maintain throughout the first half.

But despite the hot shooting through two quarters, the Celtics continued to stay within striking distance. The 10 Wizards turnovers certainly had something to do with it, and Wall -- who probably isn't used to his shooters garnering so much attention from deep -- saw a few of his patented cross-court passes intercepted. Still, they had no answer for Wall on the break, and he continued to pick them apart by finding those open shooters in transition.

Then, something nice happened and the 'Zards actually doubled their lead in the third quarter. Bradley Beal started it off, curling off a down screen, running across the free throw line, and connecting on a jumper. This was a stark difference from what we're accustomed to seeing throughout the year from him. The Gortat hand-offs were scant; he wasn't featured as a ball handler with the starting unit and simply stuck to catching the ball on the move.

This won't be a regular occurrence heading forward, it can't, but it's not a coincidence that he was much more efficient shooting the ball tonight. He had a number of shots in the paint, had a pair of trips to the free throw line (progress!) and wasn't holding the ball or running back and forth behind Gortat in order to break free from his defender. He poured in a cool 19 points on 7-8 shooting, and looked much more engaged as opposed to his struggles prior to the Charlotte game on Monday. Even with the AARP unit where he's thrown into the ball handling role, he was much more decisive coming off picks. But we have been over this before, especially early on in the year where it looked as if he was on the cusp of a breakout year, so he'll have to prove he can do this against defenses that key in on him.

Again, you just can't take away from this win. It was huge, despite what anyone has to say about their opponent, and as fans, we know better than to take these games lightly.

More importantly, the Wizards are in the playoffs for the first time since 2008. Go crazy folks. 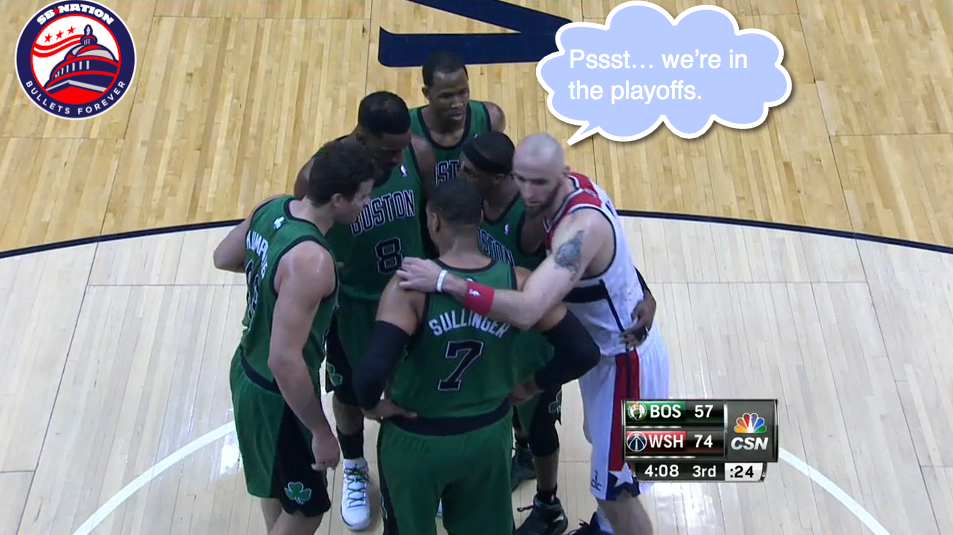