Bradley Beal has struggled against Chicago throughout his career because he's been placed into situations he's not prepared to face. For him to stay productive in this series, the Wizards would be wise to lighten his workload a bit and keep it simple.

Share All sharing options for: The Wizards need to keep it simple with Bradley Beal against the Chicago Bulls

Earlier, we broke down ways in which John Wall can overcome an entire defense designed to stop him, which theoretically should open up opportunities for players like Bradley Beal. Through six career games against the Bulls, Beal has gone to shoot just 39 percent from the field and 22 percent from distance. He's upped his shooting percentages against them this season, albeit in limited minutes in their first two meetings, but has clearly been taken out of his comfort zone.

And he can thank Jimmy Butler for that. Butler is your prototypical wing defender. He's long and athletic, and at nearly 6'8, he has the ability to defend three positions on the floor. He's an ideal fit for Tom Thibodeau. He has no qualms over playing an entire game -- he averaged just north of 40 minutes in 12 playoff games last year -- and is tough enough to do whatever is asked of him. He's equally proficient chasing catch-and-shoot players and defending isolation scorers.

Nene is the key

Why the Big Brazilian's health is crucial for Washington's upset chances

This will be Wall's biggest test

What the Wizards' star must do to break down Chicago's air-tight defense.

Nene is the key This will be Wall's biggest test

If Butler stays on Beal, Bradley will have his work cut out for him. If his regular season performances against Chicago are any indication for what's to come, Beal may be in for a long series.

Part of this is how he's been used. Much of Beal's offense comes via dribble handoffs, which hasn't worked. He's shooting just 33 percent on such plays per Synergy Sports Technology and it saps a ton of energy out of him. The thought process behind it makes sense, as it can easily be turned into a quick hitting pick and roll, but he's inclined to just take it himself and really hasn't developed the pocket pass to hit his big man in stride toward the basket.

To make things worse, he'll have to deal with Joakim Noah once that ball hits his hands. From then on, he's in trouble.  He'll think twice before dumping the ball off to his big since Butler is persistent enough to veer into the passing lane, and the chances of him getting off a clean look before Noah closes out isn't likely.

What Washington can't afford is seeing Beal worn down at the end of games. This is a long series, and while the Bulls were a favorable draw for the Wizards in general, they can't lose sight of the fact that this is the grittiest team in the East. Leaving plays like this behind in the regular season would be optimal. 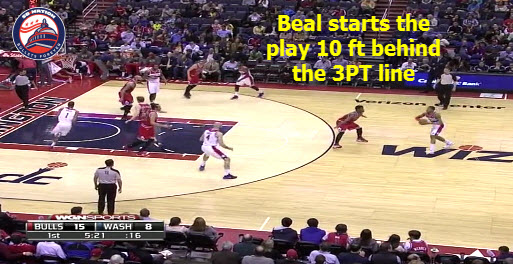 This already is an exercise in futility. No one in this instance is going to just zip past his defender, receive the dribble handoff and begin to operate. It's not long before Butler is able to sniff out the play and do the one thing he's supposed to do. 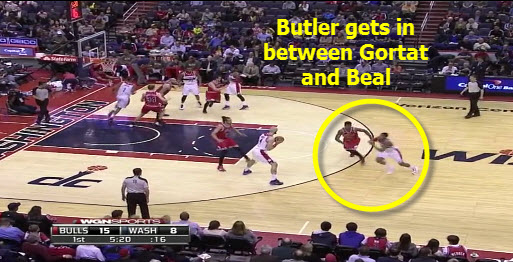 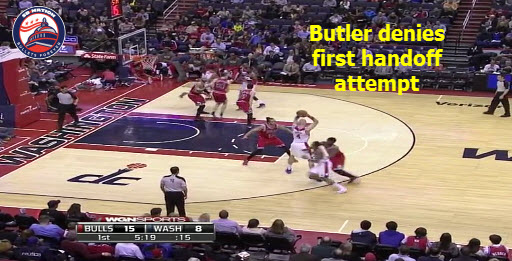 Now Beal is forced to regroup and start the process over again. 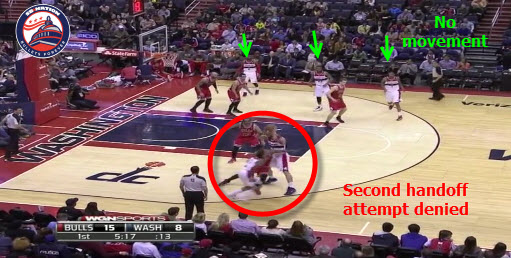 It's only after Gortat screens off Butler the second time that Beal able to get the ball in his hands. The problem now is the play is headed toward the baseline, and he isn't used to seeing the big man this far out on him. Normally he's able to at least get a shot off, but not in this instance, and there's no way he challenges Noah by trying to get by him. 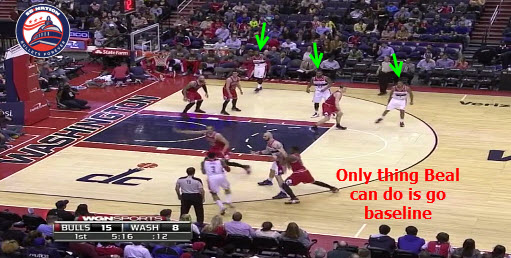 And there's Butler once again veering into the lane and denying the initial pocket pass. That's enough to force Beal to hold onto the ball longer than he wants to. He tries making up for it by trying to fit the ball into the space between Gortat and Boozer at the rim, but that pass is off and he turns it over. 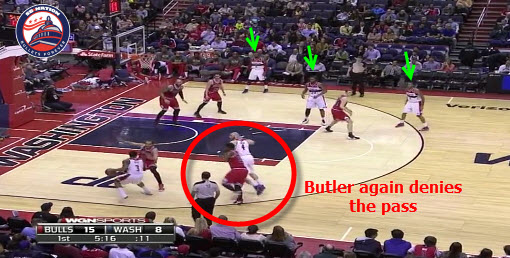 NBA teams do run dribble handoffs. Maybe not as often as Washington does, but they can be effective plays in the right situation. The Raptors run a series of handoffs in the form of a weave action, for example, and a multitude of other teams run their own version as well. The main premise is to set up your defender, get the ball on the move and into an open area where you can get off a clean shot. In many cases, despite our angst, it has worked for Beal in the sense that he's gotten off plenty of clean midrange looks and even turned the corner a couple times. But it's much harder to execute that play against a defense like Chicago's

And that's fine, because there are other ways for Beal to make a difference for Washington's offense. He isn't there yet as a ball handler, but Nene mitigates a lot of that burden, as does Andre Miller. Coming off screens and tilting the defense is equally as important in this series, and there's no real mandate to score over 100 points a night against this team. He can create a lot of opportunities with the threat of his jumper alone, as he does here to Joakim Noah.

We've seen this play a number of times with Beal. He'll start off in place of the second big in the HORNS alignment, go off a double ball screen at the free throw line and shoot or hit Gortat rolling to the basket. It is a useful play specifically because Noah jumped out on him, fearing he'd fire up a shot

It won't work every time, but it's a play with multiple options and one that doesn't require him to exhaust a ton of energy to execute. Keeping it simple with Beal in this series would be the best thing for this team.