Nene holds the key to the Wizards' upset chances

If the Big Brazilian is healthy, active and engaged, the Wizards can beat the Bulls in a seven-game series. If not, they're in trouble.

Share All sharing options for: Nene holds the key to the Wizards' upset chances

You'll see lots of Bulls-Wizards previews that heavily reference Chicago's blowout win in D.C. last month. That was indeed a signature victory because it shows the full capability of a pissed-off Bulls team that out-efforts whoever they play. It was a warning sign to the Wizards: If you don't match Chicago's intensity, you're toast.

But many of the same folks referencing that game forget the Wizards were missing their most important player. Nene, of course, was injured at the time, relegated to a suit as the Bulls shoved Washington around inside. Many of those same folks forget that Nene was a force in both of Washington's wins over Chicago in January.

This is Wall's biggest test

Why the All-Star point guard needs to stay patient and let plays develop.

This is Wall's biggest test Bulls bring cliches to life

In watching film of those two games, you see why the Big Brazilian is so important for Washington in this matchup. If he is healthy enough and engaged, he gives Washington a fighting chance. If not, the Wizards are in trouble.

Chicago's offense stinks, ranking dead last in shooting efficiency and near the very bottom in points scored per 100 possessions, but it can hang in there if allowed to play within its comfort zone. There are two things that Chicago does well, and they happen to be the two things Nene is most well-equipped to shut down.

The Bulls love pulling Joakim Noah away from the basket and opening the middle of the lane for cutters and off-ball picks. Teams that are not disciplined will play Chicago straight up and lose their men on all those baseline screens, allowing the Bulls to get easy buckets backdoor and open jumpers. (Watch the Knicks-Bulls ABC game from earlier this year to see what I mean). The key to stopping this twofold: clogging the middle and pressuring Noah enough so he can't see the lanes as easily, but not too much because he'll drive by you otherwise.

More from our team sites

More from our team sites

Nene is especially good at the former and capable of doing the latter. When engaged, he's one of the best big men in the league at "two nineing," i.e. staying in the lane in a quasi-zone just long enough to not be called for a defensive three seconds. SBNation.com's Doug Eberhardt explains:

The best "two nine" big men will bottle up the middle of the key for exactly 2.9 seconds (or usually, much, much longer without being called) while overseeing the defense like an air traffic controller. Visualize Roy Hibbert, Marc Gasol, Tyson Chandler and maybe DeAndre Jordan.

Nene was a two-nineing beast in particular in the team's first matchup, a 102-88 Washington win in Chicago in January to snap a five-game Bulls winning streak. There's a reason Noah only had three assists.

These two sequences display Nene's  two-nineing ability. Chicago loves to have Noah throwing entry passes to Taj Gibson, especially when Gibson is matched up against slighter players. Noah's great at entry passes and the Bulls do a great job spacing out in these situations. But notice how Nene is positioned. 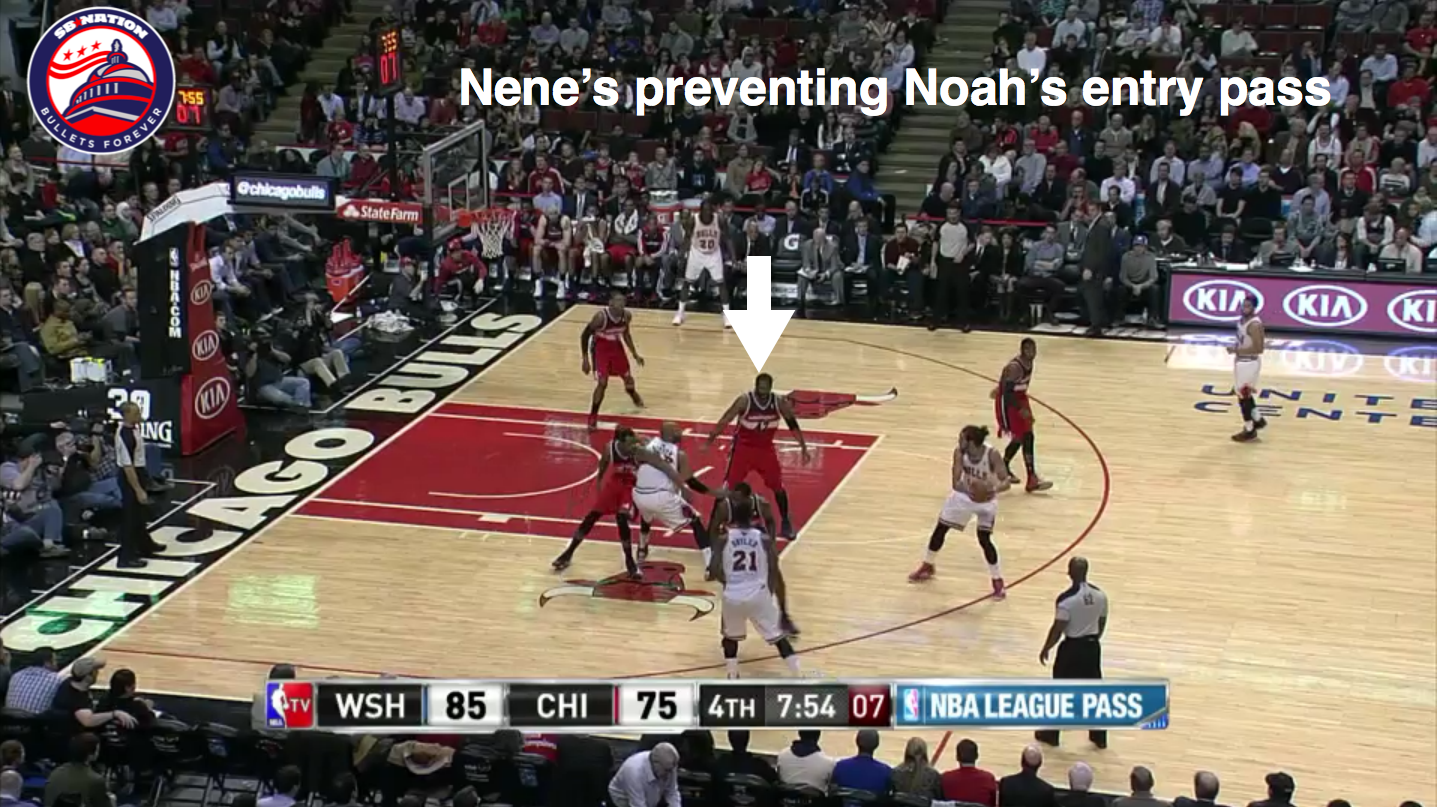 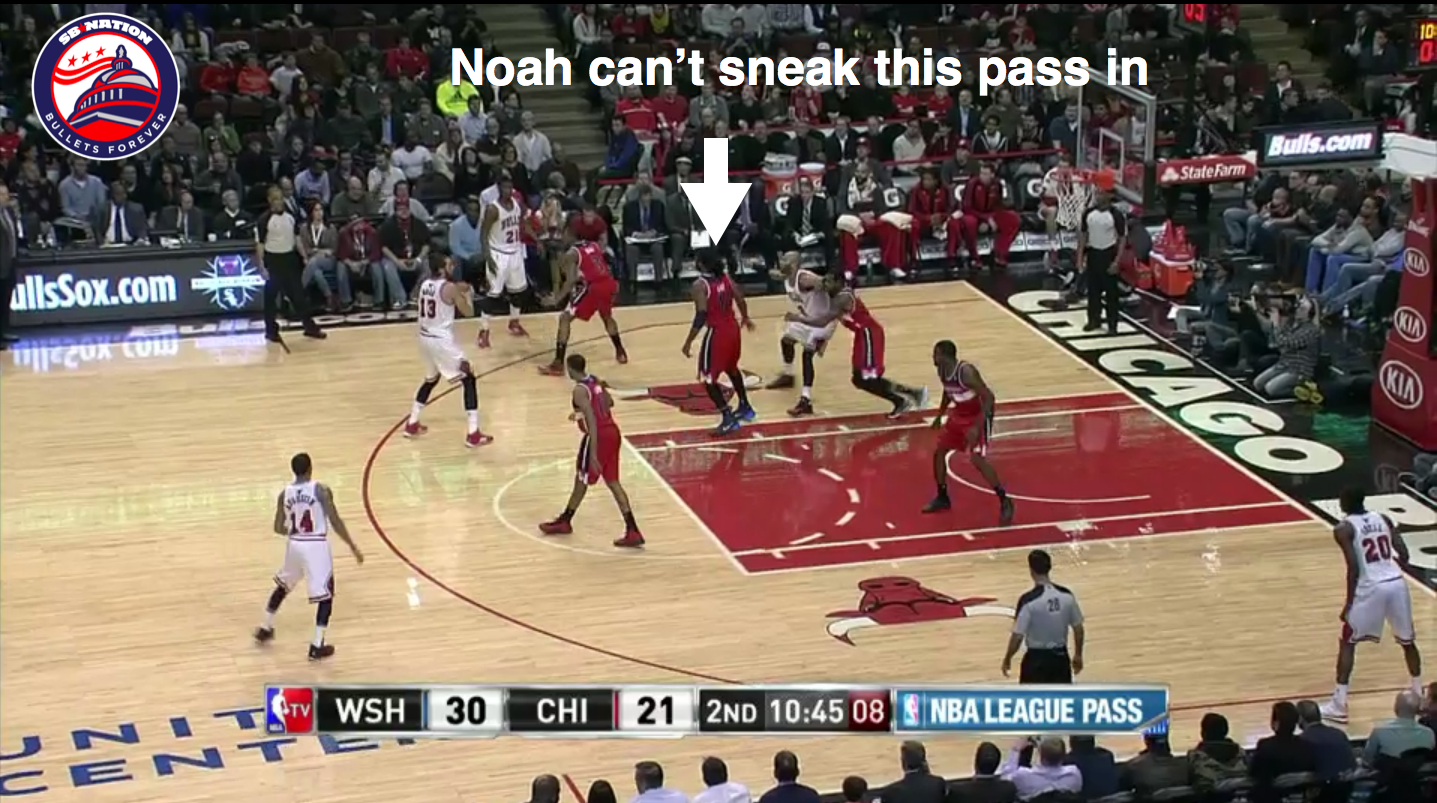 There's an art to this too. Noah has become more comfortable shooting and driving against these kind of coverages, but Nene is choosing to zone at the perfect time. Not only is Noah a step out of his range, but the spacing on his side isn't ideal. Nene has immediately recognized that and decides to zone. It's the kind of aptitude that other bigs on the Wizards don't quite possess.

When he's himself, Nene is by far the Wizards' best pick and roll defender and one of the very best in the league. This is particularly important because Chicago's best late-game offensive weapon is the D.J. Augustin/Noah two-man game. It doesn't sound imposing, sure, and other teams have better late-game options, but it's still tricky because Augustin is a fantastic shooter and nifty dribbler and Noah is very smart about timing his rolls.

That means Nene must become the eraser, especially late in games. (Note: Randy Wittman should put Nene on Noah late and Marcin Gortat on the other Chicago big. Hopefully he does). Nene is excellent at playing passing angles, giving Augustin just enough space to recover to Noah if needed, but not enough space to pull up for his silky jumper.

This is a perfect example in a key late-game situation.

Nene is very smart about using his feet here. He's hanging back so Noah won't get open on the roll, but he also throws in enough little tricks to prevent Augustin from pulling up comfortably for his jumper. Thus, he stops Chicago's best late-game play. That'll make a huge difference late in games.

We can talk until we're blue in the face about not settling for the mid-range jumpers Chicago wants you to take, and there's a lot of truth to that. That said ... this is the Bulls' defense we're talking about. Sometimes, those are the only shots you get. The Wizards are going to need to make a decent clip of their mid-range jumpers to win this series.

Who is the Wizards' best mid-range shooter? Surprisingly, it's Nene. After a poor shooting season last year, Nene bounced back by hitting nearly 47 percent of his shots from 16-24 feet, an outstanding number. In fact, only 10 players that took more than 100 shots from that spot in the entire league were better. Here's the sparkling shot chart. 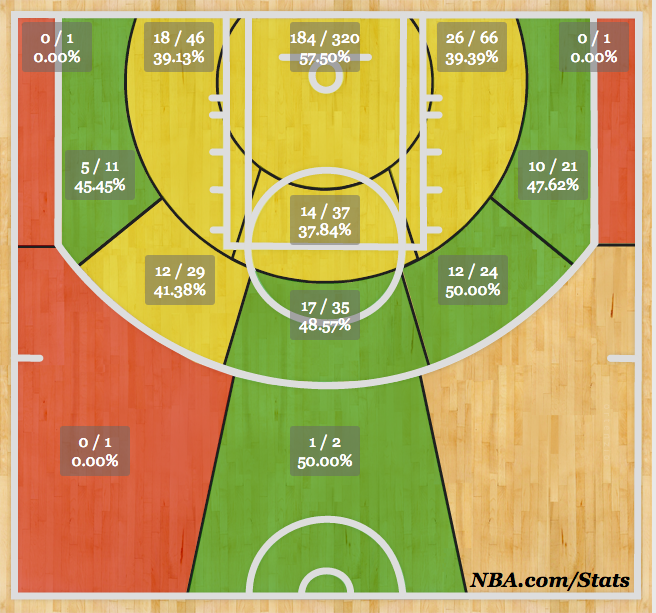 The Wizards don't have another player that even approaches that mid-range proficiency. To score on Chicago, the Wizards will need Nene to be able to hit the shots Chicago gives him at this same clip.

This seems like a cliche, but a healthy Nene gives Washington more of an edge, and that's a big deal against a team like Chicago. As Moonwalk Jenkins noted in the comments yesterday, Nene bothers Noah and has his entire career. He's tough enough to bang with him and quick enough to not be beat off the dribble. Noah will still rebound and play hard, but Nene definitely blunts some of his offensive impact.

Psychologically, Nene is the only Wizards player that can shove Chicago's guys around. This dunk was only worth two points on the scoreboard, but it's worth far more than that in everyone's head.

Very few teams have big men that can fight back against Chicago's physicality. The Wizards do.

That's the big question. On the bright side, the playoffs means no back-to-backs, which means more time for the body to recover between games. A long break between Games 2 and 3 in particular will help. The Wizards will surely keep things light for Nene in practice to lessen his load.

At the same time, this was only four days ago.

How much will Nene's minutes restriction increase? And more importantly, will Nene be able to play with the same physicality in those minutes as he did in January? Those are huge questions without good answers.

The Wizards have to hope that Nene is fresher than he's currently letting on. If he's himself, the Wizards have a fighting chance to pull off the upset. If not, we might see a repeat of that April disaster.