The Chicago Bulls will be John Wall's biggest challenge yet

The scouting report on John Wall is simple: force him into jumpers and take away his passes into the corner. So how can he lift Washington past this Chicago team in his first-ever playoff series with a defense keying in on him?

Share All sharing options for: The Chicago Bulls will be John Wall's biggest challenge yet

The Chicago Bulls are a powerhouse defensively. They rotate like mad men, bait you into the most inefficient shot in basketball and are anchored by Defensive Player of the Year candidate Joakim Noah. In an effort to save money, their front office jettisoned one of the top perimeter defenders in Luol Deng before the trade deadline ... and the team responded by remaining the best defensive unit in the league.

And for the next two weeks, their undivided attention will be on John Wall.

Learn more about the Bulls

Learn more about the Bulls

Tom Thibodeau wants to accomplish one thing during this playoff series, and that's forcing Wall into as many jumpers as humanly possible. He doesn't want Wall navigating through screens and into open spaces, jumping and firing passes into the corner for open looks.

And he has the perfect defense for it. Chicago has given up just 322 corner three attempts all year -- the second fewest in the league per NBA.com's stats page -- which is a testament to how well his players know the system. Those corner shots are generally a result of good ball movement or kick outs. More often than not, they happen because help defenders recklessly abandon their man to help a pass away or dig down into the paint to disrupt a pick and roll.

But Chicago's perimeter defenders don't stray from their mark. They pay no mind to what's happening on the other side of the floor and it's in large part due to their big men's understanding of when to show on ball handlers and when to retreat to their assignment. 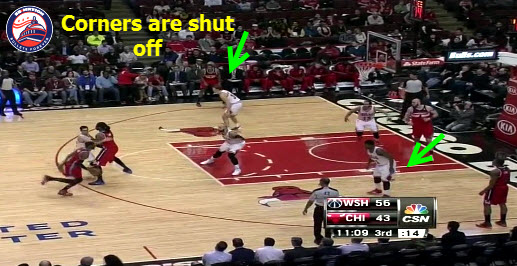 This exact set has garnered plenty of open corner three looks in the past, but the Wizards saw maybe a handful of them all season long against Chicago by my count. And it's on Wall, who has proven to be a little too antsy at the sight of open space in front of him out of the pick and roll. There's exactly one option on this play -- a long two -- and it's because Wall didn't bother keeping his dribble alive to give Nene a chance to roll to the rim. 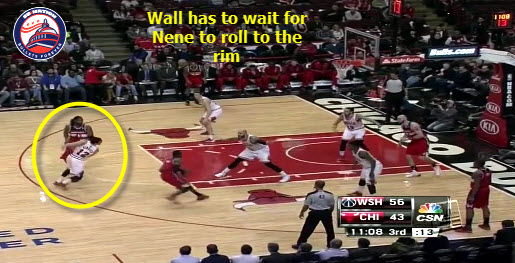 Who knows. Maybe Mike Dunleavy does jump out at Nene, freeing Trevor Ariza in the corner. Or, maybe Noah slides over because Carlos Boozer is late rotating back, giving Wall a chance to dump it off to Marcin Gortat along the baseline. There was plenty of time to work with on the shot clock. At the very worst, they're forced to reset the offense. Instead, Wall fired away.

It's not like Wall and the Wizards haven't found ways to beat these coverages in the past, it's just that it's become so sporadic and really seem to occur only when Wall and Bradley Beal are shooting well from outside. They have the means to become so much more potent on offense when they're patient and willing to work for better looks. They're a terrific screen-setting team that regularly stations their bigs out on the elbows to generate open looks for their shooters.

Here's one of their pet plays -- the Hawk set -- which involves John Wall taking (and in this case rejecting) a screen on one side of the floor while Martell Webster comes off a double screen on the other side. It's a good use of misdirection and motion which forces Chicago's defense to react rather than dictating where a standard pick and roll is heading.

And that's one way to catch their wings napping, even if it's just for a split second. Wall has the passing dexterity and the quickness to beat Chicago's rotations, and Trevor Booker in particular is a strong enough screen-setter to free up shooters.

Again, you have Wall being funneled into Noah after Hinrich denies him the Gortat pick. But this time, Jimmy Butler is just slightly out of position, though probably within reason considering where Gortat is located. But it's all that's needed for Ariza, who can sneak behind Butler and into the corner. 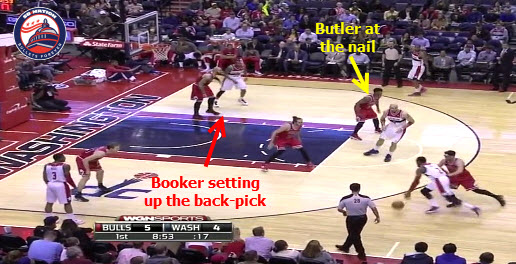 Booker is able to come up from behind and deny Butler's closeout, and Wall does the rest. He whips the pass to Ariza for a wide open look. 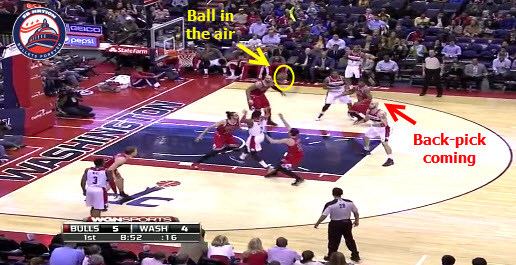 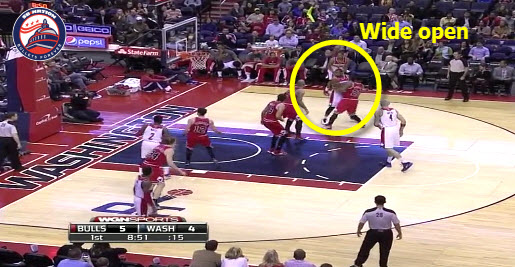 The important thing is Wall didn't take the bait and instead allowed the play to develop. That will be the key in this series. The open looks from midrange will always be there, but he can't expect to replicate one hot shooting night over the course of a seven-game series.