Boy, was that silly!

Share All sharing options for: Martell Webster said the Wizards could be a top five team in the East last summer

Last July, fresh off signing his four year deal with the Wizards, Martell Webster made a bold prediction to on the radio to Lavar Arrington and Chad Dukes:"

Expectation-wise, we expected to win 30-plus games last year. That was our goal," Webster said.

"This season is like, our expectations are, we ARE getting to the playoffs," he said, adding they've set their sights as high as the five-seed in the Eastern Conference.

Crazy, right? Here's what some people had to say about Webster's bold proclamation:

He's legitimately a reason why his proclamation isn't nuts. He played very well and was a consistent shooter for the Wizards last season. The team now has young depth, star players and good veterans to surround John Wall. If they can stay healthy, and that's a huge concern with this team, they have every reason to think they can make the playoffs.

The 5-seed? Well, let's walk before we run, fellas.

Going off the standings this year, the Wizards would need about a fifteen game turnaround to claim the 5th seed - which isn't likely.

Bryan nailed it - 44 wins were needed to secure the 5 seed this year.

Start drawing up those Eastern Conference brackets. Think of playoff slogans. Try to figure out dates the theoretical four seed would host the theoretically fifth-seeded Wizards in a playoff opener, and book your hotel rooms now. Rates will never be lower. I hear Brooklyn is lovely in April.

Washington definitely has a shot at making the post-season, especially since a few teams which we're accustomed to seeing in April and May have opted to rebuild their teams. Although they have a legitimate shot at achieving their playoff goals, the top 5 seeds are virtually secured by the same five teams that we've seen in the previous season.

Ben is a great guy, so we won't re-post the top 5 seeds he listed, especially that second team he listed.
NBADraft.net forums on July 17:
Basically everyone in the forum thought it was silly. And people sure were high on the Knicks this season!
Bullets Forever, April 15: 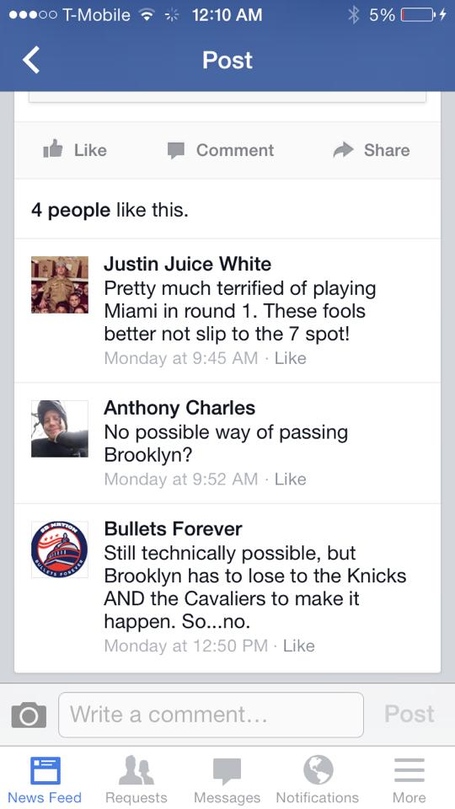 (Hat tip to DCnhokies for reminding us of Webster's remarks in the comments.)