Magical Pixels, Wizards vs. Bucks: A role reversal in Milwaukee?

Sure, the Wizards nearly blew a huge lead in what would have been an embarrassing loss to the NBA's worst team. But isn't that so much better than being the team that gets blown out before saving face at the end?

Share All sharing options for: Magical Pixels, Wizards vs. Bucks: A role reversal in Milwaukee?

BNIE hit on the proper tone and narrative in his recap of last night's 114-107 victory over the Bucks -- after building a big lead, the Wizards nearly collapsed before holding on in the closing minutes thanks to Bradley Beal. Heroics aside, nearly squandering a 28-point lead is unacceptable.

But allow me, for a moment, to play devil's advocate: How many times in recent years have the Wizards found themselves in a 20-plus point deficit, only to climb back and make the final score semi-respectable once the opponent inevitably throttled down? Invariably, we here at BF have said, "Don't be fooled, this game wasn't as close as the final score indicates," and proceeded to the tear the Wiz down for an embarrassing performance against a clearly-superior team.

Well, yesterday the Wizards were the clearly-superior team going up against the NBA's worst, and the game played out much like we've all seen before, only with the roles reversed, yes? No? Alright, at least I tried.

Anyway, a win's a win at this point in the season. All we can ask is that the Wizards win the games they should, and last night they won a game they should have. Up next is the Heat on Monday, a game the Wiz should probably lose, but after that they play the Bobcats and Magic, two more should-wins.

A quick playoff seeding update: Washington is now one game behind the Bulls for the fourth seed, two games behind the Raptors for the third , and two games ahead of the Nets. Up 4.5 games to the seventh-seeded Bobcats, the Wizards probably can't fall lower than sixth in the Eastern Conference, so it looks like they'll be playing either Chicago, Toronto or Brooklyn in the first round.

7 - Minutes the Wizards went scoreless to begin the third quarter. Technically, it was 7:03, and that was after scoring 75 points in the first half. Ick.

71 - Trevor Ariza's three-point percentage (5-for-7) against the Bucks. Beal may have kept the Wizards afloat in the fourth quarter and saved them in the end, but it was Ariza who once again led Washington offensively with a team-high 28 points on 9-of-12 shooting.

Two points in seven and a half minutes. pic.twitter.com/lLXeOGRTif

When does the 3rd quarter start??? pic.twitter.com/OnwECG6Ltr

I still have love for you Milwaukee! Damn. This feels good!!

Martell Webster deserves an honorable mention for this slam, as do John Wall and Marcin Gortat for their delighted reactions. 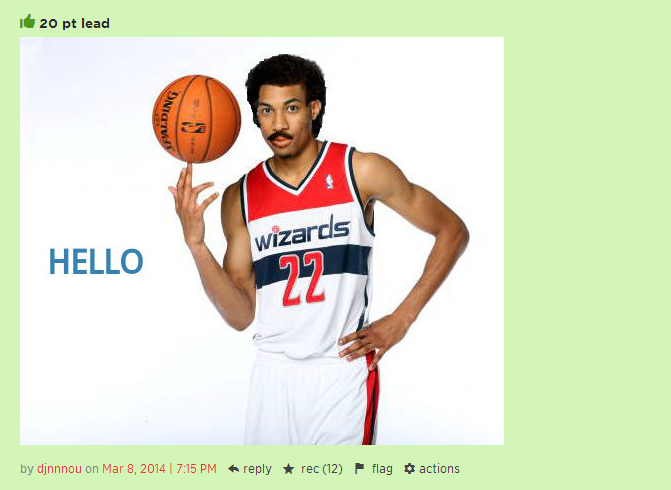