What kind of a player is Bradley Beal? Is he a three-point specialist? Is he a backup point guard? Which talents are the Wizards encouraging him to sample?

It's been a long time since Wizards fans have been able to embrace a bright season. And in a season as bright as this one, few stars on the team shine more than Bradley Beal.

In his sophomore season, Beal has become increasingly comfortable as a primary cog on this team. His numbers are up from last season in nearly every category. Hell, he even helped put Washington back on the map on All-Star weekend by helping his team win the Rising Stars challenge and finishing in second place in the 3-point contest.

However, even with about two seasons under his belt (give or take), it's become difficult to discern just what type of player Beal is and what he will become. He was in the three-point contest; does that mean he's a three-point specialist? When Randy Wittman sits John Wall, he leaves Beal in with the second unit; does that mean he's a point guard?

The family man: A Beal Q&A

SBNation.com's Holly MacKenzie catches up with the Wizards' second-year guard to discuss his family and his transition to the NBA.

Is Beal being used poorly?

Our fearless leader suggests he is.

The family man: A Beal Q&A Is Beal being used poorly?

Earlier this week, I wrote a piece over at Hardwood Paroxysm about a phenomenon called "the sampling period," whereby elite athletes sample multiple sports in their earlier years before figuring out the best fit(s). I extrapolated this line of thinking to the NBA, where I thought it would be a good idea for teams to push the skill boundaries of their younger players to help them hone long-term skills (even if it means less-than-optimal immediate results).

If part of our collective inability to pin down what type of player Beal is at this moment in his career is because of his multi-faceted use in games, then it's possible that the Wizards are putting Beal through his own sampling period. Two understand his sampling period, we need to address two questions:

The first question deals with perception; the second deals with reality.

When Beal was drafted, he was the top guard in his class. While his shooting numbers in college didn't necessarily turn any heads, it was clear to many observers that his shooting form was pure and would lead him to excel in the pro game.

Collectively, we still view Beal as a shooter, and as well we should. He has not wavered in field goal percentage, and he's just outside of the top 10 in the league in three-point percentage. Twelve of his 16 shot attempts per game come from outside of the paint, and he notches 1.04 points per possession (PPP) in spot-up situations (per mySynergySports).

However, over the past two seasons, he's gradually incorporated more ball handling duties into his game. In his rookie season, Beal spent about a quarter of his total possessions on the floor in a spot-up situation; this year, it's less than 20 percent. Last season, he spent 16.5 percent of his possessions as a scorer in the pick-and-roll ball; that has gone up to over 25 percent this year. His increased PPP in both situations between last season and this season (his overall PPP is the same at 0.91) shows that the Wizards have moved Beal into the role of occasional offensive initiator while not sacrificing much of his impact on the game.

But detractors of this strategy would point out that Beal is a shooter and he's become more efficient and reliable in situations where he's just been a shooter this season. Thus, it's not worth the team's time to stretch his latent and more raw talents in ball handling instead of working to perfect and maximize his already-existing perimeter marksmanship. Since the primary sets we see Beal use are those that begin with him as the pick-and-roll ball handler, they often end with him curling towards a midrange jumper, an inefficient shot that he's making even more inefficient by hitting at an average-to-below-average rate. If Beal were an elite midrange shooter or if he were and oversized shooter instead of an average-sized offensive guard, then his comparative advantage in those situations would be different. 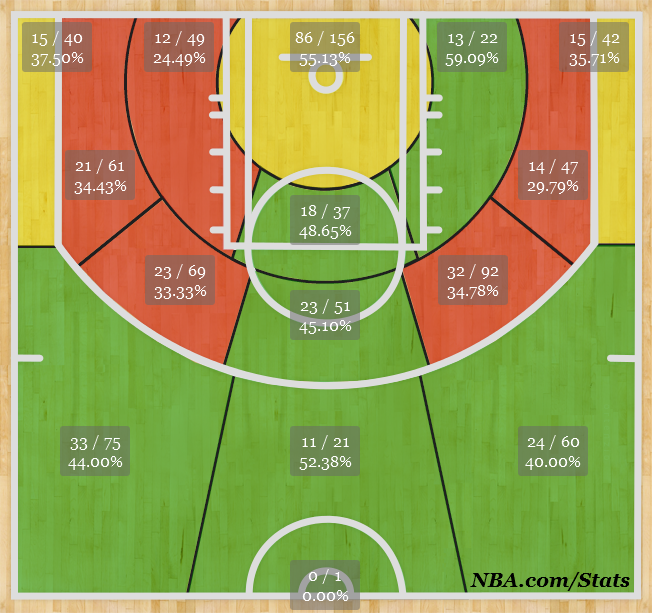 The strategy of sampling Beal to be the ball-handler thus puts him in a position to take inefficient shots. Lest we forget, over half of his shots are from midrange. If the offense were oriented around creating a spot-up attempt (where he has a higher PPP than pick-and-roll), and if he were to shoot from the corner (where he has a higher shooting percentage than from midrange), it would be a better use of his existing traits. 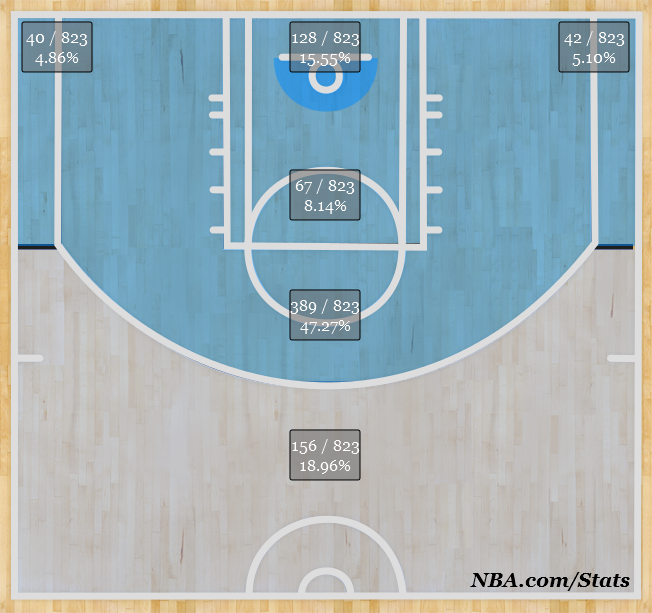 However, that's just for this year. For sampling to be effective, it must be viewed as beneficial in the long term, and Beal is anticipated to be part of the core of this Wizards team for many years to come. The teams needs to build around him -- and John Wall, and whoever else is considered part of the core -- but is that possible if you don't know what he's capable of doing? If one is to bring in complementary pieces, then it must be known what they're complementing.

If one is to bring in complementary pieces, then it must be known what they're complementing.

And it's worth noting that now's a good time for Beal to sample. This season has seen a weaker Eastern Conference than in years past, and as of today, the Wizards have a near-100 percent chance of making the playoffs, already guaranteeing the expectation set by Ted Leonsis at the start of the season. And until very recently, the Wizards did not have a passable back-up point guard on their roster; not only was Beal's ball handling a risk that could be taken, it was a necessity to give Wall rest.

In his SBNation.com column, Mike applied the idea of a "sampling period" to Beal and Klay Thompson and discussed how there are pluses and minuses to method. The results are difficult to discern from the naked eye, but a team's willingness to embrace this experimentation is interesting and important. On the one hand, a team really could have no idea how to properly use a player and wind up ruining his value. On the other, a team could stumble across a triple-double-machine in an undersized combo guard.

As Mike noted in his piece, it's possible that the Wizards will "accept sub-optimal results now because they want Beal to gain experience learning how to properly attack... In the long run, perhaps it teaches Beal how to read defenses and develop the kind of moves needed to create better opportunities for himself and his teammates."

In the end, if the Wizards are engaging in a sampling strategy with Beal's talents, the results thus far are mixed. It's clear that Beal has non-shooting skills that can be developed, but it's possible the offensive situations he initiates are not suited to his comparative advantages. He's a great spot-up shooter and great from behind the arc, but he's of average height and is forced to take shots from inefficient locations on the floor. If, in the end, his size is a moot point on his way to elite shooting -- like Kobe Bryant or Ray Allen -- then the time devoted to this experiment during a season when the team is essentially guaranteed a postseason appearance is well spent. But if he never gets to that point, and he continues to shoot most of his shots from midrange, then the evidence will point to the Wizards molding an inefficient player.

At this stage, it probably doesn't matter, and it's too soon to know if it will work out. He's young, and the evidence will come with time. But if Beal is going to be a building block of this team going forward, it's important to know what he's capable of doing and what the team wants and expects from him. Based on how he's being used, it appears as though the Wizards are in the middle of figuring that out.

Get news, links and Ziller's #hottakes in your inbox every weekday morning.