The Wizards' star point guard has made strides this season, but he's far from a finished product.

Share All sharing options for: John Wall still has areas to improve

John Wall had a really bad game on Sunday. Fifteen points on 6-13 from the field, eight turnovers, just four assists and some poor defense on Ty Lawson and Aaron Brooks. It culminated an uneven road trip for Wall, who shined against the Lakers and had a hot shooting stretch against Portland, but exhibited similar sloppiness against the Kings and in the stretches during the Blazers game where his jumper wasn't falling.

In a lot of ways, it was a microcosm of Wall's season. Nobody would question his status as this team's best player, and few would say his All-Star nod was undeserved. It seems like he's made THE LEAP. But it's probably more accurate to say that he's made steady improvement overall, rising significantly in some areas (shooting, pick and roll execution) while staying the same or even falling back in others (driving to the basket, taking care of the ball, competing defensively every night instead of some nights).

We've focused on a lot of the good with Wall, which makes sense. Wall carries such a heavy burden on a team with few other efficient shot creators, especially with Nene injured. He is far from this team's biggest problem.

But he's also not perfect. Here are a few things he needs to clean up:

As Grantland's Zach Lowe correctly noted, Wall's improved jumper, especially from deep, is a positive development. However, there's a tradeoff to such proficiency, especially as Wall continues to feel more confident firing it up from long range. Wall is still most dangerous attacking the basket, but his improved shooting has caused that area of his game to decline somewhat.

We can see this in several ways. Wall's free throw attempts per game are down from 6.2 last year to 5.1 this year. He would say that this is due to referee bias, but a drop that steep can't just be because officials are ganging up on him. He's only taken 342 shots in 66 games within five feet this season; he attempted 264 in 17 fewer games last year and 414 in the same number of games in 2011-12. Amazingly, Wall is just 35th in the league in drives per game, behind luminaries such as Will Bynum, Mario Chalmers, Jameer Nelson and Ramon Sessions.

Obviously, this is a complicated situation that cannot be explained fully by these numbers. Wall needs driving lanes to drive, and there aren't too many of them when teams can help off Trevor Booker and don't need to worry too much about Trevor Ariza beating them on a cut or dribble drive. These numbers also don't include the many times that Wall draws defenders and dishes for open threes, a Wall specialty. Wall's also curtailed his own drives to some degree in order to allow Marcin Gortat to roll to the rim.

But there are still situations where Wall settles for jumpers when he should look to attack. Here's one example:

Wall's doing the right thing by crossing back over against Denver's coverages, but rather than go directly to the basket when Timofey Mozgov retreats, he veers sideways for the jumper. Perhaps he's setting up Gortat's roll, but that'd make little sense because Booker is on the same side. He'd be better off going straight to the rim and living with the consequences.

Point guards who dominate the ball like Wall will commit turnovers, especially if they are actually driving to the basket. But it's still concerning that Wall's turnover percentage has increased despite his usage going down and, as noted, fewer drives to the basket.

Where are those turnovers coming from, then? Watching the tape, two things stand out: poor handle and jump passing. Last summer, I noted Wall's tendency to drive and jump to make a play without really knowing what he was doing. He was getting better at curtailing that practice, but we've seen a reversion of late. This is a play, for example, where Wall looked like he wanted to shoot, then threw a pass to the corner at the last moment, well after Martell Webster had vacated the area.

And Wall's handle is still loose too often. He still has problems crouching when driving, allowing his dribble to get too high. It's not hard for someone like Ty Lawson to poke the ball from behind when the ball is way up at Wall's waist. 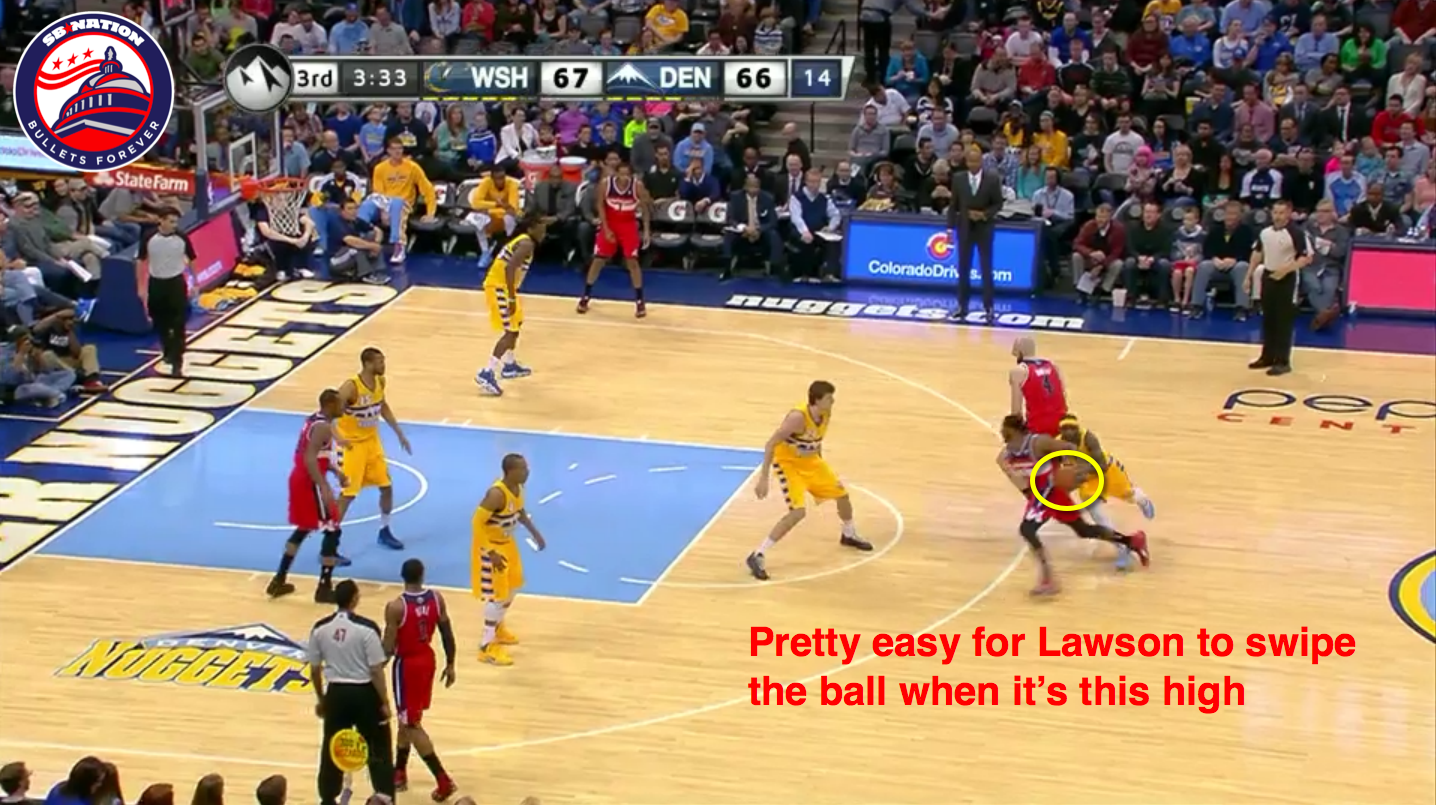 This explains how Wall's turnover rate is up despite his free-throw rate dropping. He does commit several turnovers out of aggression, and you have to live with those given his speed. But he sure commits a lot of sloppy ones too.

We've written about the Wizards' propensity to switch too often, and Wall, with his freelancing, is the biggest culprit. But Wall also continues to struggle when defending small guards, something that dates all the way back to his rookie year. Despite public declarations that defense is one of his top priorities (and, to be fair, improvement in several areas on this end against more conventional players), Wall still has trouble here. Just ask Isaiah Thomas, Phil Pressey and many others.

Why? Jerry Reynolds, the Kings' color commentator, posited a good theory on the Kings' broadcast last week: Wall is used to being the quickest player on the floor, and it unnerves him when he's not, especially against an overlooked player like Thomas. You see that play out in games. When Wall defends these small guards, he pressures them as if he can rely on his quickness to compensate, only to realize he can't. 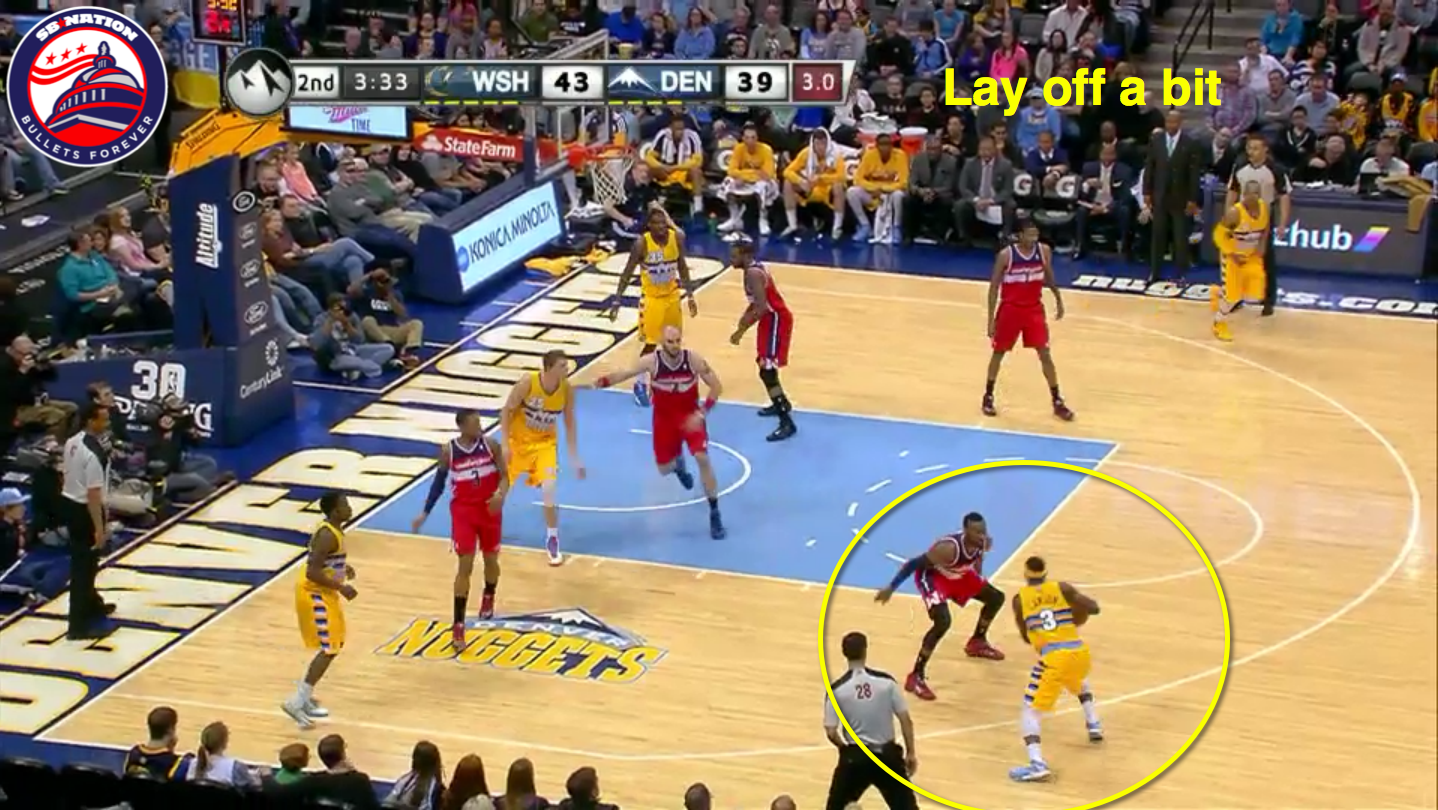 Wall has to understand that his length is as much of a weapon defensively as his quickness. Lay off the guards a bit, use that long wingspan to force jumpers and beat them to the spot if they try driving.

I bring these up not to bash Wall, only to say that even he is not a finished product. At 23, he shouldn't be. We've seen lots of development in the past 18 months, but there's still more work to be done.