The Wizards just couldn't keep possession of the ball in a 105-102 loss to the Nuggets, but remain somewhat secure as the sixth seed in the Eastern Conference...for now.

So that road trip was terrible.

The Wizards finished up a four-game West Coast swing with a 105-102 loss to the depleted Nuggets, giving them a 1-3 record for the trip and a 36-34 overall record with the next two games against the Suns and Pacers. And you thought we were done talking about .500 this season...

John Wall sure did pick an awful time to have his worst game in awhile. Bradley Beal finally kinda-sorta broke out of a bad shooting slump, scoring 21 points on 8-of-18 shooting. Trevor Ariza chipped in 18 points on 8-of-13 shooting, and Marcin Gortat racked up another double-double with 16 points and 10 rebounds, and Drew Gooden continued to singe off the bench with 15 points (7-of-12 shooting).

But Wall turned it over eight times to go with 15 points and four assists, and if Washington could have gotten just a little more from him, this is probably a win. In fact, it's a testament to how winnable this game was that the Wizards were still in it despite 24 turnovers on the road. Sigh. More coulda-woulda-shoulda with this team.

The Wizards remain seeded sixth in the Eastern Conference, two games back of the Nets for the fifth seed, and two games up on the seventh-seeded Bobcats. Luckily, the Bobcats play the Rockets and Nets in their next two games, so even if the Wizards drop their next two, it's unlikely Charlotte will catch them...for now.

24 - Wizards' turnovers against the Nuggets. This is definitely the stat of the game. Wall accounted for eight of those turnovers.

48 - Washington's shooting percentage against Denver. It isn't often the Wizards shoot that well and outrebound their opponents (46 to 38) in a losing effort. Again, see turnovers.

Drew Gooden is like French Montana. He ain't got no worries. Teams act like he can't shoot. He keeps shooting. And hitting. #wizards

If #Wizards want fans to believe they are who they talk about being, shit like this can't happen. 2-2 is ok, 1-3 is not on this road trip

Second-best 3-point shooting team in the NBA doesn't take a lot of 3s, but prematurely ejaculates every time they're open from 15 feet.

Can't feast at the line doing this pic.twitter.com/TVzMHLkrQJ

With this L @ DEN, the Wizards are looking more & more like the East's 6 seed, though seeds probably don't matter in the 3-6 range.

With this L @ DEN, the Wizards are looking more & more like the East's 6 seed, though seeds probably don't matter in the 3-6 range.

24 turnovers for the Wizards tonight. One every two minutes.

I didnt know we have some many polish people in Denver/colorado !!! Crazy! pic.twitter.com/1MVDpsNQod

#Wizards have 7th easiest remaining schedule in the NBA. #Raptors have easiest, #Bobcats have 2nd easiest, #Nets have 3rd easiest. 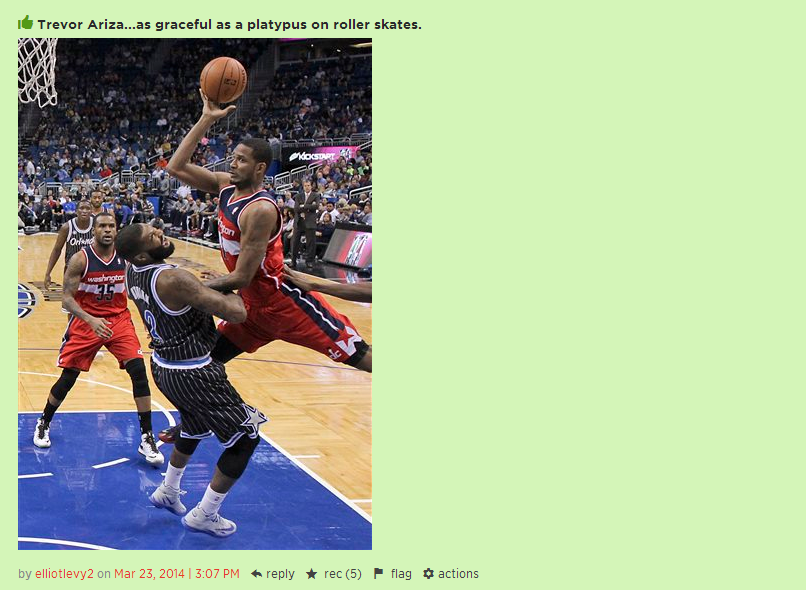