The Wizards built a 21-point lead against the lowly Lakers, but shoddy defense allowed L.A. to make a Steve Nash-fueled comeback before Washington held on for the 117-107 win.

It wasn't pretty, but a win is a win at this point. On the second night of a back-to-back, the Wizards pulled out a 117-107 win over the Lakers thanks mostly to a 28-point, 14-assist effort from John Wall.

But that wasn't before Washington built a 21-point lead in the third quarter, only to see it whittled down to six in the same period. In the end, the Lakers just weren't good enough to finish off the comeback, and the Wiz eked out the 117-110 win.

Marcin Gortat seemingly put to rest any concerns that the back injury he suffered Thursday during pregame warmups would be a long-term issue, scoring 13 points to go with 13 rebounds and five blocks. Bradley Beal scored 18 points on 4-of-6 shooting from three, and Drew Gooden (11 points, 11 rebounds) and Al Harrington (15 points) kept up the AARP unit's positive contributions.

Things got a bit interesting with a couple minutes left in the game when Gooden wrestled Nick Young to the floor, Young took exception, and mini-scuffle broke out (see video below). Gooden and Jordan Hill were both assessed Flagrant 2 fouls and automatically ejected. Both players also face automatic fines, and potentially a one-game suspension, though that seems very unlikely.

With the win, the Wizards gained a half-game on the idle Bobcats and are now three-games up on Charlotte. The Nets beat the Celtics for their third-straight win Friday and remain a game ahead of Washington for the fifth-seed.

The Wizards wrap up their four-game West Coast swing Sunday against the Nuggets, before coming home to face the Suns and Pacers. So yeah, it'd be nice to get this next one in Denver.

5 - Blocks recorded by Marcin Gortat against the Lakers.

7 - Wizards who scored in double figures against the Lakers.

The Wizards' uniforms are big-time underrated. Might be top 5 status in the league.

I feel ripped off. Lakers fans get 50% mediocre pizza just for showing up pic.twitter.com/8WLShAbQ2P

John Wall has 20 points and 13 assists. There's still 3 mins left in the third quarter. The Lakers are bad

@Truth_About_It I think we all forget we were one of the worst teams last year. For some reason, we expect domination every game. #sowizards 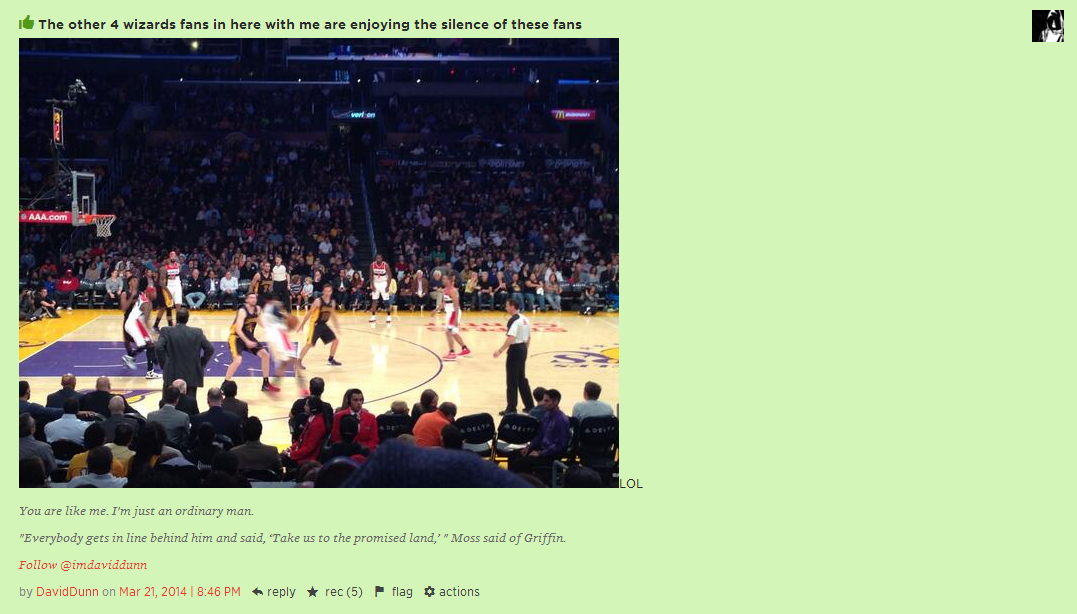 Wizards vs. Lakers: Washington escapes LA with a win