The most Wizards player in team history

It's March Madness, so we put together a bracket to find out which player best represents the Washington Wizards.

Share All sharing options for: The most Wizards player in team history

If you've followed Wizards action at all on Twitter, you're probably familiar with the #SoWizards hashtag, that pops up anytime something happens to the Wizards that falls in line with previous Wizard disappointments. Kevin Seraphin listed as day to day for two weeks? #SoWizards. The 2011 Draft? #SoWizards. Getting beat by the Sixers in your home opener by the Sixers? #SoWizards.

While the hashtag is devoted to the disappointments that come with Wizards fanhood, there are also the fun things: The annual win at home against a team you didn't expect the Wizards to beat, the quirky things Dan Steinberg brings to light about the roster on D.C. Sports Bog, and of course, the random journeymen who always get off to a really great start before trailing off into obscurity again (crossing fingers that Drew Gooden is the exception).

Like fine art, we understand when something is very Wizards-like when we see it, even if we can't put it into words. This holds true with players as well. For reasons we can't quite articulate, Juwan Howard embodies the Wizard spirit more than Chris Webber. To people who aren't Wizard fans, this probably makes no sense, but if you've ever spent a lonely night hoping the Wizards would mount a comeback against the Spurs, even though you know they'll still lose by 20, you understand what I'm talking about.

To better recognize the players that fit this billing the best, we set up a March Madness-style bracket to determine the most Wizards player of all-time. We split our Wizards up into four regions to better organize everyone:

(Note: For the sake of this tournament, we only included players from the Wizards era and their contributions in that time. So apologies to Ledell Eackles for being left off the bracket. He's arguably one of the truest Wizards this franchise has ever seen, but almost all of his finest work came as a Bullet. This holds true for Gheorghe Muresan and Manute Bol as well. Sorry guys.)

Below, we take a look at what made each player in this tournament such a Wizards player, and determine a champion. 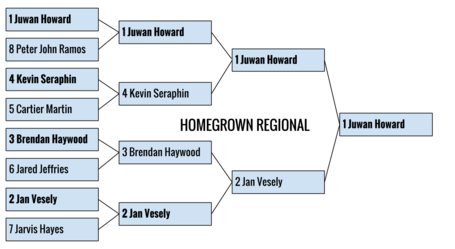 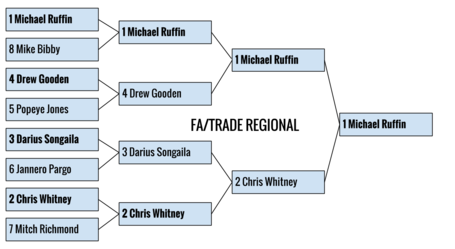 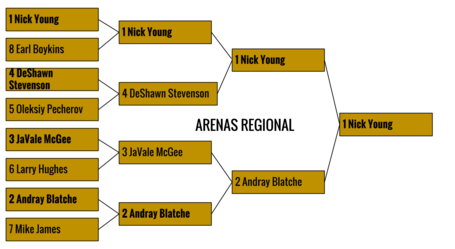 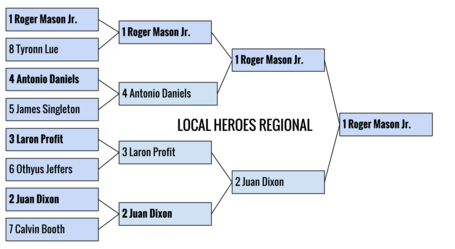 There was no way we could have someone that played with LeBron James wind up as the most Wizards player ever. So we bid adieu to Juwan Howard and Roger Mason Jr. in the semifinals, leaving us with Michael Ruffin and Nick Young.

When it came down to the final decision, there was really only one choice. While Nick Young had the perfect mental makeup for a Wizard, he was simply too gifted to be most Wizard player in franchise history. Nick Young has the perfect physique for a shooting guard, and that just isn't Wizard enough. What truly makes the Wizards endearing to their fans is the collection of misfits that have passed through over the years, and at the end of the day, no one was a bigger misfit than Michael Ruffin.

In his NBA career he had more turnovers than field goals. He's the only player to play in 400 games and score less than 800 points. He wasn't just offensively challenged, he made a career of being offensively challenged. Perhaps if he had come along a little bit later, we could have appreciated his defensive contributions a little more, but since we couldn't, all we could do was be a witness to the basketball anomaly playing in front of us.

It was clear to anyone that watched that Michael Ruffin was not going to be a great player, but he fought on, proved doubters wrong and managed to do some pretty unintentionally hilarious things trying to hide his lack of basketball skills from the world. If that isn't what being a true Wizard is all about, I don't know what is.